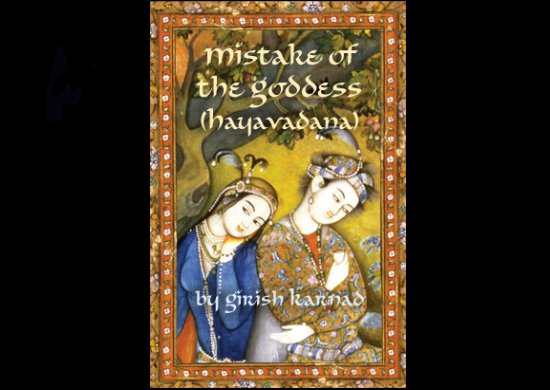 When I lived in India, I was tempted to lug home marvelous treasures, even a diamond as big as the Ritz, which I had a chance to buy in Jaipur for eight grand, but when Rogue Theatre’s co-founder (with Cynthia Meier), director and actor Joseph McGrath, returned from India it was with a play by Girish Karnad, far more valuable than a darned diamond.

The performance of this play is admirably empowered by a terrific cast, including Cynthia Meier herself as the Bhagavata/storyteller who with wit and elucidation of complex action, keeps the audience informed of where we are headed next. And that is not a simple path. A startling encounter with what appears to be a talking horse but is a man with a horse’s head (Hayavadana, played with authority by David Greenwood adorned with a marvelous mask), introduces the theme of incompleteness and the search for remedy.

The drama of “the play within the play” is drawn from an ancient Indian tale which draws us in with its plots and sub-plots, reeking with myth and romantic intrigue, glittering gold-trimmed costumes, and masks so realistic I could hardly tell they were masks (created by Matt Cotten and Aaron Cromie). A close friendship between two men (alas, not of the same caste) is threatened (understatement) by lust/love (understatement).  But when the actions of the threesome—vivacious, beautiful Padmini (Marissa Garcia) and the two young men, Devadatta the husband, played by Ryan Parker Knox, and the friend Kapila, played by Matt Bowdren—seem to reach a climax of despair and renunciation, that is only the beginning of the real theme of identity, still to be played out with unsuccessful negotiation and swordplay.  If you are resurrected to new life, but with a rival’s head, who are you?  Does emotion or reason rule?  Does the body or the mind rule?  And what role does the temptress have?  The plot is an exciting blend of comedy and serious existential thought, dualities with as many stripes as a Bengal tiger.

Other stars were Patty Gallagher, very scary as the fearsome goddess Kali (though who would guess she could let her hair down, too), and David Morden as an Actor. They have to split the Award for the Most Expressive Faces in Tucson Theatre. These two also have double roles as floppy dolls that for a while assume the role of the chorus in a classical Grecian play. Their comments are, of course, as unique and clownish as their costumes. Nothing not funny from them! And when we finally get back to the witty horseplay of the beginning, the eloquent animal, now with strangely human-looking hooves, exits with the (very) young actor Gabriel Morales bouncing along, holding onto the mane. We predict a great career for him as well as the horse.

There are far too many twists and turns to this drama than I am competent to describe. You must see it if you live in Tucson or within fifty miles and don’t care much about using fossil fuels for an entertaining evening.

To smooth things along, there is mellow Indian music played by Paul Amiel, Eric Schoon, and Anton Shekerjiev, with the accomplished dancing and singing by Jenny Hijazi. I was transported back to India for the evening, and regretted only that our two daughters who shared the ups and downs of our year in Jaipur were not along with us in the theatre.

There are several sugar-coated pills of wisdom here, as there are in most great plays. Not only are you learning a lot about India, its philosophy and rituals, but you may be reminded that triangulated relationships can be so hot and risky that most sensible people do their best to steer away from them, keeping their lusts to themselves. Also, you might learn the wisdom of NOT literally swapping heads, no matter how tempted.  Yet in your imagination and effort to understand others—be they friends or enemies or of mixed castes—that might be precisely what you need to do.

Go see the play, before it is too darn late!