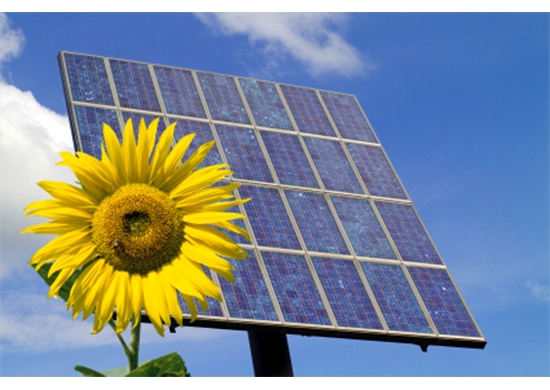 In 2012 Arizona was second, only behind California, in per capita installations of solar energy in the United States with 710 megawatts of capacity for photovoltaic electricity generation, compared with 275 mW of capacity in 2011.

This progress is a result of both utility investment in solar plants and modest incentives that subsidize the transition from fossil fuels-based energy generation to alternative sources to meet Arizona’s commitment to its Renewable Energy Standard (RES).

As solar installation costs subside nationally, installations increased 76% in 2012, 11% of all global solar systems, according to a Solar Energy Industries Association (SEIA) report. In Arizona three major utility-scale projects are scheduled to come on line in 2014.

NGR Solar and Sempra Generation have contracts to sell the energy they produce to California’s Pacific Gas and Electric (PG&E). The Solana Station’s energy will be acquired by the Arizona Public Service Company (APS), the private utility based in Phoenix.

The Arizona Corporation Commission (ACC), which is the elected State entity having responsibility for regulating public utilities, approved the current RES in 2007. Since then, Arizona authorizes electricity utilities to reimburse up to 50 % of the cost of the first 30 megawatts of capacity for residential installations and 40% for commercial installations.  Additionally, a net metering system provides credits to electric bills for solar energy generated by individual residential and commercial systems.

All of that is now changing.  The current ACC, with three new members elected in 2012, is progressively raising rates and eliminating incentives for solar energy in Arizona.  In doing so, the ACC is bowing to political pressure from the fossil fuels and nuclear power industries promoting deregulation and so-called market-based pricing.

In January 2013 the ACC eliminated statewide all cash incentives for businesses that install renewable energy systems such as photovoltaic solar panels and windmills, and reduced the incentives for residential systems from 10 cents to 3 cents per DC watt of capacity.  They justified this move on the basis of declining installation costs for renewable energy.

On July 12, 2013, the APS, which, together with the Salt River Project (SLP), provide electricity to most of central Arizona, requested new monthly fees of $50 to $100 for residential solar energy users.  APS claims these fees are needed to compensate for individual solar customers’ use of the grid since their substantially lower electric bills contribute less toward the utilities’ grid maintenance and improvement costs.

Under the net metering formula, solar users sell the surplus energy their photovoltaic panels produce during daylight hours to the utilities for use in neighboring homes or businesses that do not generate their own electricity. The solar users then use their credits to buy back electricity from the grid during hours of darkness, most of which are not peak electricity usage hours.

The cost of the direct incentives to renewable energy customers is covered by the utilities themselves from surcharges included in all Arizona electric bills. Almost all producers of solar-generated electricity are connected to the national grid, since individual private battery storage facilities are not cost effective.

This situation until now has benefited the utilities since they do not need to transport electricity long distances over their grid.  But it has raised red flags with the fossil fuel and nuclear energy behemoths that see their share of the market diminishing as increased numbers of electricity consumers are converting to solar sources, especially now that installation costs are declining.

According to responses to our inquiries, the average cost of a complete on-the-grid photovoltaic solar system for southern Arizona residential electricity customers is between $20,000 and $40,000, and, therefore, not accessible to low income residents.

Similar systems can be leased for approximately $11,000, payable in monthly installments with no money down;  lessees cede their up-front incentives to the leasing company.  Such arrangements can reduce electric bills by well over $100 per month, according to usage.

According to TEP, residential customers who install photovoltaic solar energy systems before October 15, 2013, are still eligible for up-front single-payment incentives of 10 cents per watt of DC capacity not exceeding 50 % of the total cost, up to 30 mw of DC capacity for systems that have a minimum 20 year warranty, since this amount was previously budgeted. Eligible customers must sign a credit purchase agreement assigning TEP the corresponding renewable energy credits (REC) for 20 years.

RECs allow an electricity utility to meet their requirements under their state’s renewable energy standards.  In Arizona the standard is that 15% of all electric energy generated by regulated utilities be generated from renewable sources by 2025, a relatively low one. California’s goal is 33% by 2020.

A Science Applications International Corporation (SAIC) cost-benefit analysis conducted last year for APS shows the benefits to the utility from solar energy exceed the costs over a 20-year period.  Projected benefits were 21.5 to 23.7 cents per kilowatt hour (KwH); costs were calculated at 13.9 to 15.5 cents per KwH as shown in below.

Chart 1. Benefits and Costs of Solar DG on the APS System.

Source: Crossborder Energy Study of Costs and Benefits of DG Solar in Arizona.

This analysis includes all directly generated solar energy, including the utilities’ units, not just that derived from individual residential or commercial photovoltaic panels, but it serves as an overall indicator overall since individual systems costs and benefits, which reduce transmission costs, should not exceed those for long-distance transmission from solar and wind plants.

Moreover, it only considers those benefits perceived directly by APS and does not factor in the externalities that benefit the public at large from reduced carbon emissions and the effects of climate change.

The benefits to the electric utilities themselves are principally from tax breaks and other subsidies stacked on the side of non-renewable energy.  According to Rhone Resch, President and CEO of the Solar Energy Industrial Association in Washington, DC, al energy technologies receive some form of federal government support, oil and gas since 1916, coal since the 1930s, nuclear since the 1950s, and solar, with the 30% federal tax credit, since 2006 (quoted by Ryan Rendazzo in the Arizona Republic, July 31, 2013).

A 2009 study by the Environmental Law Institute of US federal energy subsidies shows the breakdown presented below.

By contrast, federal subsidies to renewable energy for the same period total only $23.9 billion, of which more than 50% benefit corn-based ethanol production.   Nuclear energy subsidies were not included in the ELI study.  But, clearly, fossil fuels have a 3 to 1 advantage in federal subsidies for the study period, and both the US Congress and the federal administration stacked the decks in favor of the fossil fuels industries, in spite of political rhetoric regarding climate change and support for renewable energy sources.

Meanwhile, a new 400 mW coal-fired plant at Springerville is under construction to provide Tucson Electric Power (TEP) with electricity, just as the Los Angeles Department of Water and Power and the Nevada Energy utilities in Las Vegas are opting out of their contracts with SLP for energy from the coal-fired Navajo plant near Page.

So, the modest incentives to home owners and small businesses to install photovoltaic solar panels and wind mills is extremely modest by comparison to those granted the fossil fuels and nuclear energy providers by the federal government.  Similarly, the 30 % federal tax credit that these homeowners and small businesses receive pales in comparison with the huge subsidies that benefit the fossil fuels and nuclear energy sectors.

The ACC is reviewing the APS request for rate increases and new solar customer fees and should issue its decision at its November meeting. Leading up to that date, lobbying and other forms of pressure from the opponents of alternative energy are increasingly evident. If the new fees are approved for APS, TEP and the other electric utilities in Arizona will not be far behind in demanding similar rate structures. TEP serves 400,000 families and businesses in southern Arizona.

According to the US Energy Information Agency, Arizona’s energy consumption by end use sector is presented in Chart 1 below.

According to the U. S. Energy Information Administration (EIA), 40.4% of the energy generated in Arizona was from coal, 28.9 % nuclear –from the Palo Verde plant–  21.5% from natural gas, and 15.4% from renewable sources.  The electricity generated in Arizona exceeds in state demand; the balance is sold principally to southern California cities and Las Vegas.

In 2011, 40.4% of the energy generated in Arizona was from coal. Coal burning power plants are a major source of air pollution and greenhouse gas emissions.  The percent of energy produced from natural gas in Arizona is decreasing, from 33.9% in 2007 down to 21.5% in 2011. Natural gas-fired power stations burn cleaner and produce lower greenhouse gas emissions than coal-fired generators, but natural gas is a non-renewable energy source.

Arizona’s Palo Verde Nuclear Power plant is the highest capacity nuclear plant in the United States.  In 2011 it produced 28.9% of Arizona’s electric energy. By comparison, renewable energy production in Arizona in 2011 increased by 3% over the 2010 level to 9.0% of the total for the year. Arizona ranked 23rd in 2010 among U.S. states in carbon dioxide emissions, at 95.9 million metric tons. This ranking reflects the state’s relatively low industrial base and high dependence on automobile transportation. (http://www.eia.gov/cneaf/electricity/epa/epa_sprdshts.html. 1999-2011 Net Generation by State by Type of Producer by Energy Source. EIA-906, EIA-920, EIA-923).

On January 15, 2013, Arizona Governor Jan Brewer signed Executive Order No. 2013-03, which created a 40 member Task Force to produce a Draft Master Energy Plan for the state by September 2013, followed by public hearings and submission to the Governor by December 2013.  These hearings will be important venues for citizens to make their priorities known on this issue if they know about them and participate.

Citizens also need to become well informed on Arizona’s energy policies and regulations with good information on the positions and cozy alliances of the next group of candidates for the Corporation Commission, for which elections will be held in 2014.  If they fail to do so, the fossil fuel and nuclear energy advocates will be able to control the regulatory policies, and renewable energy will become a forgotten dream in Arizona.