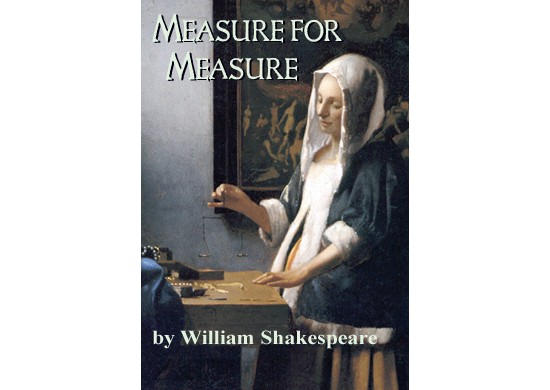 Measure for Measure, directed by David Morden, is presented by The Rogue Theatre, November 7—24, 2013 at The Historic Y, 300 E. University Boulevard, Tucson.

Once again the Rogue Theatre brings us one of Shakespeare’s truly fascinating plays, with fine acting by the dedicated group that Arizona should be proud of and devoted to supporting.  As with the earlier play of this Season of Lust series, the Rogue tackles the most challenging of choices.

The themes of Measure for Measure (1604) go directly to the center of society’s dilemmas, ambivalences, injustices, and ideological conflicts between unconditional and conditional ethics.  We assert that this play is very much a feminist work, the dramatic exposure of degrading inequality, male manipulation, and sexual exploitation.  It is absolutely relevant to today’s treatment of women and girls around the globe.

Perhaps the captivating Marissa Garcia, who appears as the novice nun Isabella in Measure for Measure, has elsewhere played Desdemona, Ophelia, or Cordelia, but here she is passionate in her confrontation with the lusting Angelo, Deputy for the Duke Vincentio who has “lent him our terror, dressed him with our love,” trusting him to exercise power without reservation.  The Duke absents himself from his place of political power in Vienna, but disguises himself as a Friar to stay around and observe his demesne.  Isabella is begging clemency for her brother Claudio, due to be executed “for getting Madam Julietta with child.”  The law against fornication, a risible effort long on the books, has been honored more in the breach than in the observance.  Enforcing the law is an absurdity, an ironic futility.

The nine times married Mistress Overdone (played hilariously by Cynthia Meier) appears on stage briefly representing the “bawds” worried about the impact on their business by the crackdown on fornication.  Another character, Lucio (Lee Rayment), darts athletically in and out of the action; he is a vibrant gadfly who prods Isabella to be more aggressive in pleading before Angelo for her brother’s life and engages in comic and annoying interaction with the disguised Duke, saying, “Nay, friar, I am a kind of burr, I shall stick.”

The dual role of Duke Vincentio and phony friar is played by Joseph McGrath, who bears much of the weight of the play, observing and manipulating interactions of other characters, and expounding with extended monologues.  He carries the action forward with admirable energy as the tangles play out.

Isabella, garbed in the pure white habit of a novice nun entering the strict Roman Catholic order of Saint Clare, is intolerant of her brother’s “prompture of the blood.” Yet she desperately pleads for clemency before Deputy Angelo, who is not only patronizing and callous, but even offers a deal: in exchange for his way with her, he will grant Claudio pardon.  Thus a trade, Measure for Measure.  This scene might make one think of Karla Faye Tucker who, several years ago when on death row in Texas, was ridiculed by then Governor George W. Bush—for begging for her life.

Marissa Garcia, here as throughout the play, achieves impressive dramatic control with facial and vocal expression, never as laconic as some of the other actors.  For example, we felt that in this production the daunting challenge of presenting Angelo’s perfidious character was not quite met: through the shifting agenda he pursues, Angelo needs to persuade us he is steely in execution orders, an aggressive predator when his lust is aroused, a betrayer of promises, and a shamed hypocrite.  Despite all these attributes, his formerly jilted fiancée, Mariana, played with a light touch by Jenny Hijazi, stays true and faithful.

We’ll not spoil anyone’s anticipation of the ins and outs, the duplicity, violence, psychological intrigue, and powerful monologues and dialogue worthy of the more well-known Shakespeare tragedies.  This play, along with Othello, Hamlet, King Lear, and others, is enriched by feminist themes.  In a man’s world, survival was, and often is conditional.  Othello kills Desdemona.  Cordelia was misunderstood and lost her father’s love and her inheritance.  Isabella was nearly raped by Angelo, and it took “the bed trick” to spare her.

We, the audience, leave the scene as if abandoning the couples joined by Duke Vincentio, back with all his authority to wrap up the plot, but though there was an Aristotelian beginning and middle, there was no end.  The stories are not over.  Isabella gazes off into the future, to decide whether she returns to the Saint Clare nuns and withdraws from society to a life of poverty or settles for the Duke, who can offer wealth, prestige, and probably children.  To bed down with him might be to sacrifice her soul.