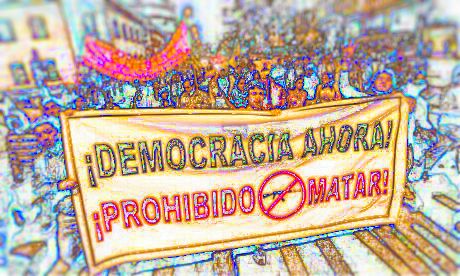 Thousands of Peruvians participated in a popular anti-government protest on July 27th, the day before Peruvian Independence Day, in Lima and also in numerous provincial cities.  They were repressed by national police using tear gas and water cannons, and dozens were arrested.  This was the largest anti-Government protest in Peru for more than a decade.

The current protests began on July 19th following the designation by the Peruvian Congress of an Ombudsman and six new members of the country’s Constitutional Tribunal, both of which are intended to be independent entities within the Government overseeing human rights and the constitutionality of laws.  Members of the Congressional leadership had been caught on tape doling out these positions among the strongest political parties, according to a formula of mutual support, in order to attain the necessary 2/3 majority.  Several of the designees had highly questionable backgrounds that led to charges of corruption.  Following the initial protest, the Congress later reversed its decisions.

Much of the discontent reflects disappointment by people who had supported President Ollanta Humala in his 2011 campaign for a “national and popular” government.  After assuming office without a majority in the Congress, Humala continued the neoliberal economic policies that have been in place since the Fujimori dictatorship (1990-2000).

For several years now, a majority of the people of Cajamarca in the northern Peruvian highlands have been mobilizing against the Conga gold mining concession in favor of a Newmont Mining Company affiliate there, affecting the water rights of traditional peasant communities there.  Also, indigenous organizations in the Amazon Basin in Peru have been opposing oil and gas development contracts in traditional indigenous territories.

The protests were initially organized by a loose group of largely middle-class students and politically unaffiliated citizens who call themselves “los indignados”, motivated principally by corruption issues.  The July 27th protest was called by Peru’s largest labor federation, the General Confederation of Peruvian Workers (CGTP), upset over a new civil service law designed to require “increased productivity”.  The unions were joined by the “indignados” and a broad coalition of human rights organizations, opponents of less than transparent mining contracts favoring Canadian and US mining companies over the water rights traditional peasant communities, and LGBT activists.

The coalition is called “Toma la Calle” (Occupy the Street). The organizers have vowed to continue the protests following Independence Day celebrations July 28-29.  President Humala and the Congress are just completing the second year of their five year terms.  Humala’s popularity, once well over 50% had declined to 33%, mainly a result of accusations of corruption in both the administration and the Congress.

In September 2013, a major strike of informal gold miners paralyzed Madre de Dios and other parts of Peru over the complex regulation on the formalization of placer gold mining in areas designated for that purpose under the Government’s plan to limit gold mining to certain environmentally less vulnerable areas.  The miners claim that the more than 60 certifications required to “formalize” small-scale placer gold mining favor corporate mining interests that can maintain offices in Lima with lawyers, accountants, and access to the power structure. While these protesters also include operators who use expensive heavy equipment, a majority of them are formerly impoverished recent migrants from highland areas.

That protest successfully blocked the Interoceanic Highway, opened only three years ago and which links the Atlantic coast and central Brazilian cities of Brazil through Peru to ports on the Pacific.  This protest was only lifted when the Peruvian Government made significant concessions, prolonging the time frame for “formalization”, and measures to make some of the procedures simpler.

These protests and the generalized discontent with the Peruvian Government reflect an increased awareness by the people of Peru similar to that evident throughout the Middle East and more recently in Chile and Brazil in Latin America, as well as in the United States.