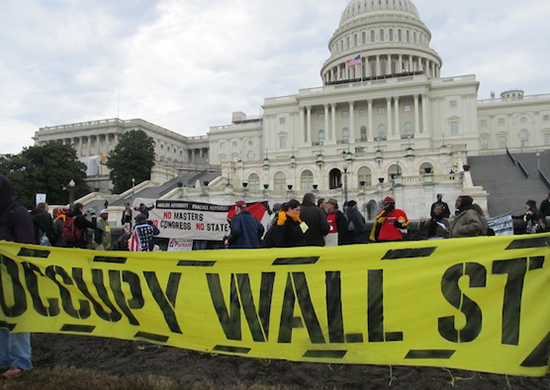 After waves of protest in other parts of the world, it all kicked off in the U.S. on Sept. 17, 2013 with Occupy Wall Street, which became ground zero for the movement. This final installment is just to present all our remaining photos and video footage of Occupy encampments and events. By pure luck was able to visit all these different encampments during a cross-country road trip in Dec. 2011 when I traveled from AZ to the east coast to visit family. At the end have included a link to what I consider to be a good reflection on Occupy which appeared in The Nation. As far as my own analysis of the Occupy movement’s success or failure in what it set out to do I’ll stick with a friend’s quote: “If you’re not sitting around on a couch, and actually out there doing something, you’re OCCUPYING!”

OCCUPY NOLA—I spent 2 days in New Orleans in Dec. 2011, just before the camp’s eviction. Occupy NOLA was a fascinating environment as the video shows, complete with its own square dance which a few New Orleans Saints fans joined after the game.

OCCUPY NASHVILLE—DEC. 2011, I showed up here one evening and was given a tent site and a instant soup for supper. The following day I filmed a protest against the Citizens United decision by the Supreme Court.

OCCUPY TUCSON—Nov. 2011, Occupy Tucson ended up having three different encampments, three evictions, over 700 citations and arrests. Today they have an office in the Center For Global Justice and are still having general assemblies and protests.

OCCUPY D.C. AND OCCUPY CONGRESS—JAN. 2012, Our most comprehensive video of Occupy activities, showing general assemblies, human mic., etc. and the Jan. 17, 2012 OCCUPY CONGRESS which attracted several thousand occupiers from all over the country. I camped with them in the freezing cold in Freedom Plaza for 4 days.

OCCUPY TAMPA—DEC. 2011, For months they slept on the sidewalk in downtown Tampa enduring harassment and arrests, then they set up an encampment in a private park in West Tampa.

OCCUPY EL PASO—OCT-NOV. 2011, Got to spend a lot of time hanging out here while working in the area. They had a 24 day permit from city council. When that ran out seven were arrested for continuing to occupy the plaza.

OCCUPY LITTLE ROCK—An interesting camp beside the interstate with a geodesic dome, wood heat, solar panels, and meditation tent. A tornado alert took place the night I spent there and the Holiday Inn next door put everyone up for the night for free.

Breaking Up With Occupy; The Nation