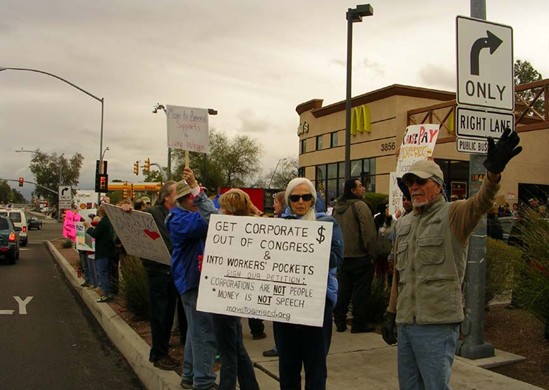 “Hold the burgers!”, “Hold the fries!”, “We want wages supersized!!!” chanted demonstrators at the McDonald’s on Speedway and Alvernon in Tucson yesterday. The demonstration was held in solidarity with protests all over the country against the obscenely low wages paid to McDonald’s workers and to fast food workers in general. By 12:30 the protest, which started at noon, had grown to at least 70 demonstrators. The police, out in force, soon got officious and made the demonstrators stand on the 18-inch gravel strip between the sidewalk and Speedway Boulevard. This was completely unnecessary as the protesters had left the middle of the sidewalk open to pedestrians, but it had the unintended consequence of showing the large number of demonstrators present to the drivers passing by on Speedway; many of whom honked their horns in response, giving a thumbs up sign. Just before one o’clock a quick rally was held, with speakers calling for solidarity and stating that we wish to represent all the workers as best we can, and not just those under contract. After the rally protesters shouted spiritedly and clapped loudly so that those working inside the McDonald’s could hear them. Although the day was cold the rally was a fucking whopping success. Oops, I’m supposed to stay impartial … sorry about that.