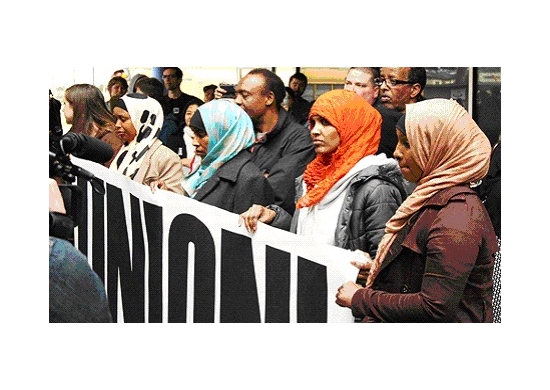 Workers won a big victory this month in the little Washington town of SeaTac with the success of passing Referendum 1 and its signature issue to raise the minimum wage to $15 an hour. The vote was certified, and it passed by 50.6% (77 votes).

The town is named for the airport located between Seattle and Tacoma. Most of the people who live in this diverse community are dependent on jobs in and around the airport. It is estimated that 6,300 workers at 72 airport-related businesses in and around SeaTac will directly benefit from passage of the referendum.

The Teamsters have been trying for 13 years to organize baggage handlers and other non-union airport workers. The obstacles they had faced seemed insurmountable. They were constantly blocked by anti-union laws and regulations and the targeting of union activists. Every time they had an organizing campaign that looked successful, the rank-and-file leaders were fired or intimidated.

Airports are under the Railway Labor Act, which means unions are required to organize a certain number of airports at the same time—in this case, including Hawaii. A few years ago, they decided to go directly to the community with a workers’ rights referendum. They joined together with HERE, which was organizing the large hotels and restaurants near the airport, and SEIU, which was working to organize Seattle fast-food workers.

While most of the publicity has been around raising the minimum wage, there is much more to the SeaTac Referendum. It also provides for a minimum of 6.5 days of sick leave a year and specifies that all tips go directly to the workers instead of being confiscated by managers. In addition, it states that part-timers must be given more work hours before other part-time workers are hired. And it includes 90-day job protection for workers whenever there is a change in contractors.

The week that I volunteered in the campaign, there was a giant multi-union blitz for a push to get out the vote for Referendum 1. Rank and file and staff from all three unions arrived from as far away as Minnesota, believing that a victory in SeaTac would be an impetus to struggles across the country. Some union workers at SeaTac also took leave to be able to work on the campaign.

Abdirahman Abdullah, an employee of the airport’s Hertz rental car location, took a leave of absence from his job to campaign in support of the measure. “The workers at the airport work hard but don’t get what they deserve,” Abdullah said. “They’re juggling two or three jobs just to pay the bills, let alone to save money. This initiative … it’s going to improve their lives.”

The working class in SeaTac is very culturally diverse, as is the workforce in and around the airport. When I went into the Ethiopian Cultural Center, I saw that it was clearly an organizing hub where community meetings were held and all the latest information about the campaign was posted.

Teamster Local 117 had worked with workers in struggle at the Hertz rental car company a few years ago when 34 Somali and Muslim workers were suddenly suspended for praying on the job. It had been agreed previously that they could take mini-breaks for their daily prayers. Then suddenly, they were told by a manager, “If you guys pray, you go home.” When the workers asked if this was a new rule, they were told “yes,” but they prayed anyway. They believed it was a contractual violation.

“This is an outrageous assault on the rights of these workers and appears to be discriminatory based on their religious beliefs,” Tracey A. Thompson, secretary-treasurer of Teamsters Local 117, said in a statement at the time. The Teamsters worked to get them their jobs back and filed an unfair labor practice. About 70% of the Hertz drivers are Muslim. Labor and faith-based organizations joined with the Teamsters in protests outside the Hertz counter with signs, “Respect me, respect my religion.”

The union represents nearly 80 Hertz drivers, who earn between $9.15 and $9.95 an hour. They receive no health benefits, vacation, or sick leave. This history of struggle helped bring together labor, faith-based organizations, the Somali Services Coalition, and the Ethiopian Cultural Center to fight for Referendum 1.

The opponents of Referendum 1 have threatened to demand a recount and will take the measure to the courts to try to get it nullified. From the beginning, Alaska Airlines and the employer associations for restaurants, hotels, and rental car companies opposed the referendum. They tried to keep it off the ballot but were unsuccessful. Then, the oil tycoon, ultra-rightist Koch brothers joined them in trying to defeat the measure.

But the victors are taking this win as a mandate and moving forward to expand the $15 minimum wage to Seattle. Fast-food workers and their allies announced that on Dec. 5 there will be an all-day march from SeaTac to the Seattle City Hall. “We are taking the movement from its victory in SeaTac all the way to City Hall, and for people who cannot make the march there will be rallies in SeaTac and Seattle as well as along the march.” Despite the threats to take the measure to court, these workers are not deterred from pursuing their mandate from the SeaTac vote.

[The author worked with Occupy Salem in Salem, Oregon, and is moving to Tucson in December 2013; she was here for the Tear Down the Walls conference in November and looks forward to working with Occupy Tucson and other groups at the Global Justice Center.]