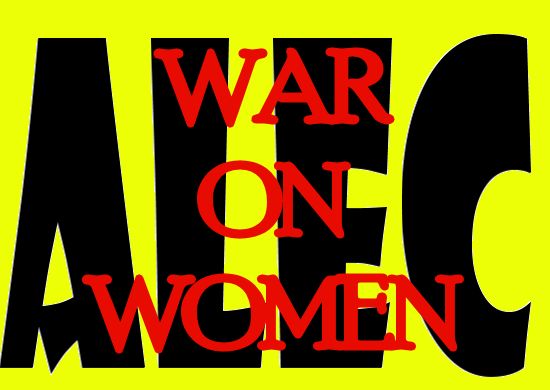 Abortion is perhaps one of the most controversial issues in America. Protests and legislative groups have long fought for their belief of whether Pro-Life or Pro-Choice is the ‘right’ choice for America. Women are caught in the middle, facing real and immediate decisions about their health, ability to work and their own future.

ALEC is often considered a right-wing lobbying group. They bring corporations and legislators together to draft model legislation to be introduced across the states. This idea allows corporations better access to lawmakers, brings legislators ‘gifts’ like resort stays which are often not required to report as campaign contributions and allows laws to be introduced quickly around the country. In this way ALEC has the ability to quickly change law to favor industry, such as responding to lost profits from activists filming farm cruelty by quickly introducing laws that ban such filming or responding to GMO concerns by introducing state laws that prevent local city and county resolutions related what seeds are used.

With abortion this leads to multiple states introducing laws quickly with women having to make choices while their rights keep changing. Kansas recently introduced a bill to reduce abortion access to women, similar to laws recently passed in Texas and Oklahoma which were both federal court challenges, because of the speed of these laws being introduced around the country there is little time for courts to
test the validity of these laws before more states join in.

Arizona saw a number of these laws in 2012 highlighted by a War on Women protest outside the state legislature. Many of the laws seem to come from ALEC legislators and be part of the model bills introduced
around the country. Debbie Lesko (Alec state chairman) introduced an Arizona bill, now state law making employers able to deny conception and abortion coverage to employees (employer may require that the corporation provide a contract without coverage for specific items or services required under subsection Y of this section because providing or paying for coverage of the specific items or services is contrary
to the religious beliefs of the religiously affiliated employer offering the plan)
http://www.azleg.gov//FormatDocument.asp?inDoc=/legtext/50leg/2r/bills/hb2625c.htm&Session_ID=107

Another 2012 law is often cited for making a women legally pregnant 2 weeks before conception, http://www.azleg.gov//FormatDocument.asp?inDoc=/legtext/50leg/2r/laws/0250.htm&Session_ID=107 like many state laws it bans late term abortions.

In 2013 the push for limited reproductive rights for women has been fought in many states. A Texas legislator Senator Wendy Davis, became famous for her 11 hour stand against a bill that would have cut
abortion access statewide.
http://www.huffingtonpost.com/2013/06/30/wendy-davis-abortion-special-session_n_3526041.html

Around the country people are taking notice and fighting back. A bill has been introduced in Ohio to limit access to men’s healthcare for erectile problems. Seemingly a response directly to many of the recent laws making more requirements for who can perform reproductive services and the steps a patient must complete and required warnings.
http://www.legislature.state.oh.us/bills.cfm?ID=129_SB_307

(A) No person other than a physician shall issue to a patient a prescription for a drug intended to treat symptoms of erectile dysfunction.

(B) Prior to issuing a prescription for a drug intended to treat symptoms of erectile dysfunction, a physician shall do all of the following:

(1) Obtain from the patient a notarized affidavit in which at least one of the patient’s sexual partners certifies that the patient has experienced symptoms of erectile dysfunction in the ninety days preceding the date on the affidavit;

(3) Conduct a cardiac stress test and obtain a result, described in writing, indicating that the patient’s cardiac health is compatible with sexual activity;

(4) Notify the patient in writing of the potential risks and complications associated with taking drugs intended to treat erectile dysfunction and obtain the patient’s signature on a form acknowledging the patient’s receipt of the notification;

(5) Declare in writing, under penalty of perjury, that the drug the physician is prescribing is necessary to treat the patient’s symptoms of erectile dysfunction and attach to the declaration a statement that
clearly describes the physician’s medical rationale for issuing the prescription;

(6) Place all documents described in divisions (B)(1) to (5) of this section in the patient’s medical record and retain the documents as part of that record for not less than seven years.

(1) Require the patient to undergo a cardiac stress test every ninety days while the patient is taking the drug to ensure that the patient’s cardiac health continues to be compatible with sexual activity;

(2) Require the patient to attend three sessions of outpatient counseling within a period of not less than six months after the drug is initially prescribed for purposes of ensuring the patient’s understanding of the dangerous side effects of drugs intended to treat the symptoms of erectile dysfunction.

The physician shall ensure that the sessions include information on nonpharmaceutical treatments for erectile dysfunction, including sexual counseling and resources for patients to pursue celibacy as a viable lifestyle choice.

Several efforts around the state have honored Wendy Davis’ stand to stop bills limiting women’s right to access. Organizer Deborah Curtis held a rally at the State Capital stating “We have a shining example of courage and commitment to the people of Texas and America in State Senator Wendy Davis who stood for hours to prevent the ALEC directed, Republican controlled right-winged legislature from voting their Abortion Bill into law. The American people are ‘entitled’ to Freedom of Choice, Jobs that pay a living wage, Healthcare, Healthy food, Housing, Public Education & Unions and not have their constitutional rights usurped by State and National legislatures controlled by organizations like Americans For Prosperity and American Legislative Exchange Council which are both funded by the Koch brothers. We as a people must demonstrate to people like the Koch brothers that we will stand and fight for our civil liberties and our country!” I am asking all Independent, Political, Non-political, Progressive, and Unions, and Religious organizations to Stand With Greater Phoenix MoveOn.org as allies in Solidarity in a “Silent” Vigil protest against the Americans For Prosperity and American Legislative Exchange Council Anti-Peoples Agenda. There will be no speeches, no chanting or singing. We will stand in silence for two hours and as darkness falls turn on flashlights and stand for 1 more hour and dispersing in silence. We will stand in silence to let those who think they are in power know that we, as a people, will not held hostage to their ALEC controlled political agenda. If Wendy Davis can stand and talk for 13 hours we certainly can stand in silence for 3.