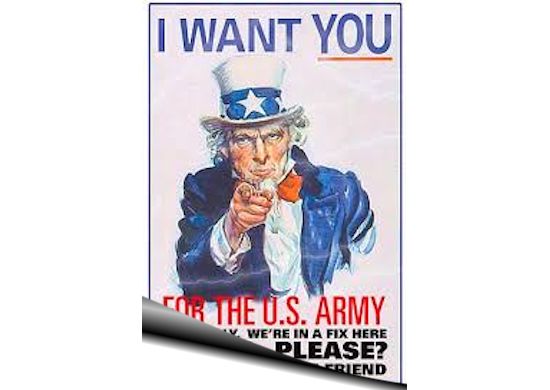 Today, the Army Strong recruiters were tabling at Pima College. I walked up to the table and the recruiter said, “Miss, what do you study?”

“Future Studies,” I replied. “I bet you haven’t heard of that field.”

“No ma’am, I haven’t. What is it about, making possible scenarios of the future?”

“Well, what can I tell you about why the military is important to the future, and why we need brave new soldiers to protect our future?”

“Have you been in combat?”

“Yes, I served a tour in both Iraq and Afghanistan.”

“Did you come back with PTSD?”

“Isn’t one out of 3 or 4 soldiers a large percentage of soldiers?”

“The number of those affected with PTSD is going down because military psychologists are screening soldiers before they go into combat zones to make sure they are mentally prepared for the battlefield.”

“What do they do to desensitize them? Perhaps show them pictures of woman and children being blown up? Do they tell them killing people is normal behavior?”

“No ma’am. They just train us to be good soldiers. The weak hearted recruits are eliminated from combat.”

“What about the suicide rate of soldiers and vets?”

“Here again, it’s only a small percentage of soldiers who are taking their own lives because of mental illness.

“The military has been a great career choice for me. I’ve been around the world. I’ve lived in Koran, Japan, and Germany. I love the Army lifestyle and my profession in the army. I’m a ballistic meteorologist.”

“Does that have something to do with global climate change?”

“No ma’am. I’m look at climate conditions and how they will affect artillery. I have to be fairly close to the target to do my job, but we get information about the weather from Outer Space satellites.”
“So, how to you feel about the war in Iraq being started by false evidence? Do you think it was a war to control their oil fields?”

“Saddam Hussein was a dictator who used chemical warfare on his own people. He tortured people. We had to stop him.”

“But the American public was lied to about the reason to go to war in Iraq. The results of those lies were that thousands of people have been killed or injured, including American soldiers. Who do you think was doing the torturing at Abu Ghraib? Wasn’t it the Americans?”

“The soldier recruiter next to him answered, “It was the Americans.”

“So what do you think about drone technology? Also, how to you feel that the military budget being so huge while poverty is growing in the USA and people are deprived of their basic human rights? Is that what you call freedom?”

“Ma’am, we need a large military budget to remain on top of the military technologies of the world. Our freedom depends on it. Drones—using precise targeting– are helping us fight enemy combatants in a way that causes the least collateral damage.”
“You don’t feel any remorse on what has happened to the people to Iraq because of the US invasion based on falsehood?”

“I feel no regrets on what I’ve done for my country. Soldiers follow orders. We respect the decision of our generals because they see the whole political situations and know when the arm forces are necessary to protect American liberty. Soldiers don’t question the decisions of generals. I have no power over our political situation. We are paid to follow orders and do so with the highest honor.”

“You might not have any power over politics, but you do have power over your own morality, your personal story about your relationships with the Cosmos. No one can take that power away from you. When it comes down to it, isn’t what counts in life is one’s own morality? However, to be in touch with one’s moral compass, doesn’t it mean one has to question authority, to know wrong from right, lies from truth?”
We stood there in silence for a few seconds looking into each other’s eyes. I was looking directly at the future and was trying my best to change the lie in front of me. Breaking eye contact, I walked up the stairs with the word “morality” burning throughout the two hemispheres of my brain as if ballistic missiles were bursting in the air all around me.