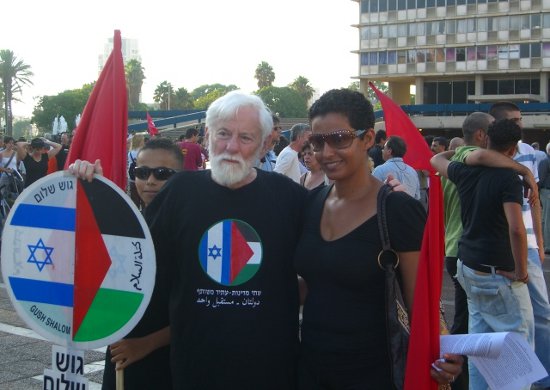 Can a country boycott itself? That may sound like a silly question. It is not.

At the memorial service for Nelson Mandela, the “Giant of History” as Barack Obama called him, Israel was not represented by any of its leaders.

The only dignitary who agreed to go was the speaker of the Knesset, Yuli Edelstein, a nice person, an immigrant from the Soviet Union and a settler, who is so anonymous that most Israelis would not recognize him. (“His own father would have trouble recognizing him in the street,” somebody joked.)

Why? The President of the State, Shimon Peres, caught a malady that prevented him from going, but which did not prevent him from making a speech and receiving visitors on the same day. Well, there are all kinds of mysterious microbes.

The Prime Minister, Binyamin Netanyahu, had an even stranger reason. The journey, he claimed, was too expensive, what with all the accompanying security people and so on.

Not so long ago, Netanyahu caused a scandal when it transpired that for his journey to Margaret Thatcher’s funeral, a five hour flight, he had a special double bed installed in the El Al plane at great expense. He and his much maligned wife, Sara’le, did not want to provoke another scandal so soon. Who’s Mandela, after all?

ALTOGETHER IT was an undignified show of personal cowardice by both Peres and Netanyahu.

What were they afraid of?

Well, they could have been booed. Recently, many details of the Israeli-South African relationship have come to light. Apartheid South Africa, which was boycotted by the entire world, was the main customer of the Israeli military industry. It was a perfect match: Israel had a lot of weapon systems but no money to produce them, South Africa had lots of money but no one who would supply it with weapons.

So Israel sold Mandela’s jailers everything it could, from combat aircraft to military electronics, and shared with it its nuclear knowledge. Peres himself was deeply involved.

The relationship was not merely commercial. Israeli officers and officials met with their South African counterparts, visits were exchanged, personal friendship fostered. While Israel never endorsed apartheid, our government certainly did not reject it.

Still, our leaders should have been there, together with the leaders of the whole world. Mandela was the Great Forgiver, and he forgave Israel, too. When the master of ceremonies in the stadium mistakenly announced that Peres and Netanyahu had arrived, just a few boos were heard. Far less than the boos for the current South African president.

In Israel, only one voice was openly raised against Mandela. Shlomo Avineri, a respected professor and former Director General of the Foreign Office, criticized him for having a “blind spot” – for taking the Palestinian side against Israel. He also mentioned that another moral authority, Mahatma Gandhi, had the same “blind spot”.

Strange. Two moral giants and the same blind spot? How could that be, one wonders.

THE BOYCOTT movement against Israel is slowly gaining ground. It takes three main forms (and several in between).

The most focused form is the boycott of the products of the settlements, which was started by Gush Shalom 15 years ago. It is active now in many countries.

A more stringent form is the boycott of all institutes and corporations that are dealing with the settlements. This is now the official policy of the European Union. Just this week, Holland broke off relations with the monopolistic Israeli Water Corporation, Mekorot, which plays a part in the policy that deprives Palestinians of essential water supplies and transfers them to the settlements.

The third form is total: the boycott of everything and everyone Israeli (Including myself). This is also slowly advancing in many countries.

The Israeli government has now joined this form. By its voluntary no-representation or under-representation at the Mandela ceremony, it has declared that Israel is a pariah state. Strange.

LAST WEEK I wrote that if the Americans find a solution to Israel’s security concerns in the West Bank, other concerns would take their place. I did not expect that it would happen so quickly.

Binyamin Netanyahu declared this week that stationing Israeli troops in the Jordan Valley, as proposed by John Kerry, is not enough. Not by far.

Israel cannot give up the West Bank as long as Iran has nuclear capabilities, he declared. What’s the connection, one might well ask. Well, it’s obvious. A strong Iran will foster terrorism and threaten Israel in many other ways. So Israel must remain strong, and that includes holding on to the West Bank. Stands to reason.

So if Iran gives up all its nuclear capabilities, will that be enough? Not by a long shot. Iran must completely change its “genocidal” policies vis-à-vis Israel, it must stop all threats and utterances against us, it must adopt a friendly attitude towards us. However, Netanyahu did stop short of demanding that the Iranian leaders join the World Zionist Organization.

IN THE last article I also ridiculed the Allon Plan and other pretexts advanced by our rightists for holding on to the rich agricultural land of the Jordan Valley.

A friend of mine countered that indeed all the old reasons have become obsolete. The terrible danger of the combined might of Iraq, Syria and Jordan attacking us from the east does not exist anymore. But –

But the valley guardians are now advancing a new danger. If Israel gives back the West Bank without holding on to the Jordan Valley and the border crossings on the river, other terrible things will happen.

The day after the Palestinians take possession of the river crossing, missiles will be smuggled in. Missiles will rain down on Ben-Gurion international airport, the gateway to Israel, located just a few kilometers from the border. Tel Aviv, 25 km from the border, will be threatened, as will the Dimona nuclear installation.

Haven’t we seen this all before? When Israel voluntarily evacuated the whole Gaza Strip, didn’t the rockets start to rain down on the South of Israel?

We cannot possibly rely on the Palestinians. They hate us and will continue to fight us. If Mahmoud Abbas tries to stop it, he will be toppled. Hamas or worse, al-Qaeda, will come to power and unleash a terrorist campaign. Life in Israel will turn into hell.

Therefore it is evident that Israel must control the border between the Palestinian state and the Arab world, and especially the border crossings. As Netanyahu says over and over again, Israel cannot and will not entrust its security to others. Especially not to the Palestinians.

WELL, FIRST of all the Gaza Strip analogy does not hold. Ariel Sharon evacuated the Gaza settlements without any agreement or even consultation with the Palestinian Authority, which was still ruling the Strip at that time. Instead of an orderly transfer to the Palestinian security forces, he left behind a power vacuum which was later filled by Hamas.

Sharon also upheld the land and sea blockade that turned the Strip practically into a huge open-air prison.

In the West Bank there exists now a strong Palestinian government and robust security forces, trained by the Americans. A peace agreement will strengthen them immensely.

Abbas does not object to a foreign military presence throughout the West Bank, including the Jordan Valley. On the contrary, he asks for it. He has proposed an international force, under American command. He just objects to the presence of the Israeli army – a situation that would amount to another kind of occupation.

BUT THE main point is something else, something that goes right to the root of the conflict.

Netanyahu’s arguments presuppose that there will be no peace, not now, not ever. The putative peace agreement – which Israelis call the “permanent status agreement” – will just open another phase of the generations-old war.

This is the main obstacle. Israelis – almost all Israelis – cannot imagine a situation of peace. Neither they, nor their parents and grandparents, have ever experienced a day of peace in this country. Peace is something like the coming of the Messiah, something that has to be wished for, prayed for, but is never really expected to happen.

But peace does not mean, to paraphrase Carl von Clausewitz, the continuation of war by other means. It does not mean a truce or even an armistice.

Peace means living side by side. Peace means reconciliation, a genuine willingness to understand the other side, the readiness to get over old grievances, the slow growth of a new relationship, economic, social, personal.

To endure, peace must satisfy all parties. It requires a situation which all sides can live with, because it fulfills their basic aspirations

Is this possible? Knowing the other side as well as most, I answer with utmost assurance: Yes, indeed. But it is not an automatic process. One has to work for it, invest in it, wage peace as one wages war

Nelson Mandela did. That’s why the entire world attended his funeral. That’s, perhaps, why our leaders chose to be absent.