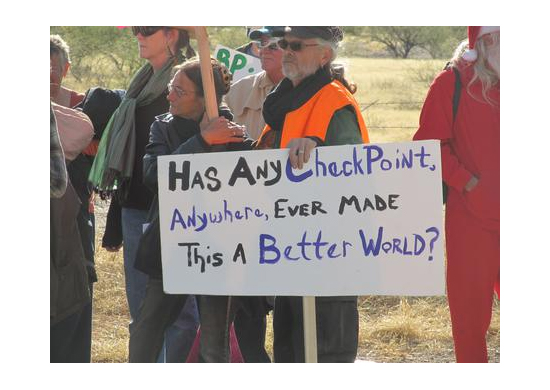 While southern Arizona continues to be ground zero for the most extreme measures of border militarization today, it is also home to powerful nodes of civil resistance. On December 8, local residents from Arivaca and the surrounding area held their first protest at a Border Patrol checkpoint—one out of about a dozen located throughout the region. The protest focused on one of many concerns shared by all the residents: the disruption of the checkpoint to their daily lives. I documented the event in the video posted below.

Though powerful in its own right, the protest was only the latest in a series of recent, high-profile actions across southern Arizona, ranging from civil disobedience to solidarity vigils:

The Dream 9, a group of undocumented youth who grew up in the United States but eventually returned to Mexico, reentered the United States on September 30 in Nogales, AZ as part of a public protest to challenge the unjust immigration system. The youth were detained and later released to face future immigration proceedings.

In Tucson, on October 11, police arrested more than 20 activists after they locked themselves down to buses carrying chained undocumented immigrants on their way to Operation Streamline—an immigration court that hands out prison sentences for reentry into the United States. Border Patrol and police have arrested and pepper-sprayed other activists trying to block deportations of undocumented immigrants.

On October 10, family, friends, and solidarity activists held a binational march and vigil along the border wall to denounce the complete impunity of the Border Patrol agents who gunned down 16-year-old José Antonio Elena Rodriguez, a Mexican national killed as he walked down the street of his hometown Nogales, Sonora on October 10, 2012. José Antonio was the sixth Mexican citizen slain by the Border Patrol on Mexican soil since 2010.

Also in October, the 26-year-old southern Arizona resident Jill Lix posted a video that has since gone viral, showing her defying Border Patrol requests to search her car at a checkpoint. The video underscores the reality that has riled up so many in southern Arizona: not only the Border Patrol’s lack of professionalism, but also the nearly comical bungling of poorly trained agents facing someone who clearly knows her rights.

Before we marched on the Border Patrol checkpoint located on Arivaca Road near Amado, AZ (about 30 miles north of Nogales), organizers informed us that the checkpoint had closed for the day in response to the protest—another small victory in southern Arizona’s autumn of resistance against the machinery of militarization and deportation.