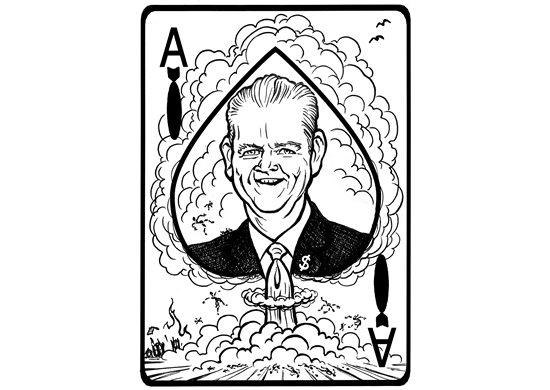 Third in an ongoing series of irreverent profiles on Tucson’s One Percent, this time featuring Raytheon Missle Systems

2012 net income was $1.9 billion. Net sales weighed in around $25 billion. Tucson’s economy is at the mercy of this corporation, the city’s largest employer and the world’s largest guided missile maker. According to an economist at the U of A, should Raytheon reduce its workforce by just ten percent (1,000 jobs averaging $75,000), the Tucson economy would lose $75 million annually.

Raytheon manufactures devices designed to end human life. Their products include, among many others, the Tomahawk cruise missile; the Javelin anti-tank missile; the Paveway laser-guided bomb, the M982 Excalibur guided artillery round; the Phalanx CIWS naval anti-missile defense system; the Sidewinder air to air missile and the Exoatmospheric Kill Vehicle anti ICBM system. Interestingly, the company sometimes doesn’t even need to produce their actual weapons to make a profit; all they need to do is exist. Last summer, as the drums of war were beating over a potential invasion of Syria, Raytheon’s stock rose ten percent in 60 days.

Yet when the political and economic breezes aren’t blowing quite so stiffly in their favor, Raytheon regularly makes noise about yanking its plant from Tucson, suggesting operations would be cheaper elsewhere. This triggers a run on kneepads as city and county officials pleasure Raytheon execs with stimulating amounts of corporate welfare. Last year, Pima County purchased about 400 acres of land abutting the Raytheon plant, ostensiblyas a buffer to prevent urban encroachment upon the weapons facility. But back in 2010, Raytheon cited a shortage of land for expansion as the reason they selected Alabama for a new facility (and its 300 jobs) instead of Tucson. In response, the county launched a 40 million dollar economic development plan centered on Raytheon and Davis Monthan Air Force Base. They’ll be spending $8 million to move the access road to the Raytheon property and to purchase adjoining land for $5.9 million, evidently to keep in reserve as a future gift to placate the company next time they threaten to leave. In a foreheadsmacking plot twist, the seller who was paid nearly $4 million on that deal is Tucson’s most infamous One Percenter, Don Diamond,  the land speculator profiled in our first issue.

World Peace. Among Raytheon’s many customers are the governments of Turkey, Qatar, Oman, Kuwait, and China.

But until global detente breaks out, Tucson’s voters and activists can work toward electing and holding accountable a city council and county board of supervisors with the cojones to stand up to the military industrial complex. We need creative reallocation of the money we’ve been doling out to this corporate war profiteer; we should be investing in more sustainable and homegrown jobs—small and locally-owned business—rather than keeping our economy hostage to an international megacorporation whose profits depend on killing and  mpoverishing the citizens of countries with whom their customers disagree.