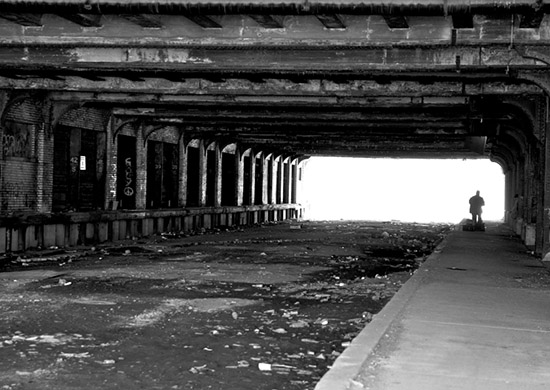 Every year, men, women, and children are arrested for performing basic activities that are essential to life. . There is increasing regulation of the streets, subways, parks, and other public places to restrict the activities that can be performed there. Communities are using the criminal law to cleanse their streets of homeless survivors. What is emerging—and it is not just a matter of fantasy—is a state of affairs in which a million or more citizens have no place to perform elementary human activities like urinating, washing, sleeping, cooking, eating, and standing around. Because these laws present homeless persons with a “choice” between compliance and survival., criminal law should excuse homeless offenders if they opt for survival.

Everything that is done has to be done somewhere. No one is free to perform an action unless there is somewhere he is free to perform it. Though everyone has to be somewhere, a person cannot always choose any location he likes. Some locations are physically inaccessible, and there are some places one is simply not allowed to be. A person who is not free to be in any place is not free to do anything.

Fearing poorer, more crime-ridden areas, an increasing number of homeless people choose to live near downtown business districts or in safer residential neighborhoods. Many homeless people choose to sleep in public parks, train stations, abandoned buildings, and streets rather than shelters because they fear the theft and violence, drug addicts, and unsanitary conditions that pervade the shelters. Evidence indicates that they migrate to middle-income areas because their conspicuous presence provokes negative reactions from residents of wealthier areas.

Some of them are allowed to crowd together into publicly provided “shelters” after dark (though these are dangerous places, and there are not nearly enough shelters for all of them). But in the daytime, and all through the night for many, wandering in public places is their only option. Their freedom depends on common property in a way that ours does not. The homeless are allowed to be—provided they are on the streets, in the parks, or under the bridges. When all else is privately owned, the sidewalks are their salvation.

Intolerance towards the homeless is exemplified by complaints from local merchants claiming that their businesses are harmed by the presence of the homeless, by cities’ desire to prevent the drain on municipal services that often accompanies the homeless, and by negative reactions of local residents to the growing number of homeless people migrating to their communities from skid row areas. These negative reactions stem from a fear of increased crime and unsanitary conditions, distaste for begging and other living habits of the homeless, and a general desire to avoid those who are homeless. Some municipalities have aggressively sought to drive the homeless out of their jurisdictions.

Since 1996, the City of Tucson has embarked upon an all-out assault on the homeless individual. The City has enacted a laundry list of anti-homeless laws such as: closure of public places the homeless frequently visit; construction of statutes prohibiting obstruction of sidewalks/public places to bar the carry or temporary storage of personal property; strict enforcement against loitering/loafing in public places; denying individuals the right to sit or lay down on sidewalks or in other public places; denying individuals the right to sleep in public places; strict enforcement of City park curfews against individuals who patently appear homeless; prohibiting panhandling or begging in public areas where such activity is most lucrative; and making basic human functions such as bathing, urinating and defecating in public a criminal offense while utterly failing to provide a public means for individuals without homes to comply with the law. These actions have created hardship and inequity by forcing the homeless out of the city center—the very place where services for these people are located.

To the extent that any level of government has an ethical obligation to provide shelter, that obligation appropriately falls to the local government. A city’s proximity to the people and their problems make it the appropriate level of government to respond to dire and basic needs. Along with crime prevention, fire response, and refuse collection, shelter is a traditional municipal function that addresses the basic and immediate needs of city residents. However, the extent of a city’s ethical obligation to the homeless beyond the provision of shelter is unclear. Homelessness is a national problem; the macroeconomic trends that contribute to homelessness are national in scope, and the transience of homeless people speaks to the fact that the problem cuts across geographic boundaries. Put another way, the fact that cities are where most homeless people are, and where most homeless people go, should not create an ethical duty upon cities to pay for the full range of services that those people may require.

The homeless are migrating away from the skid row areas and into more affluent residential and business districts; often to the displeasure of local merchants, residents, and government officials. In response, many municipalities are adopting anti-sleeping statutes which burden the fundamental right to travel. Given that many cities either refuse or cannot afford to provide adequate and safe shelter sufficient to meet the growing demand, the use of these laws will become a more common method of addressing the growing problem of homelessness. The courts that have reviewed these laws have reached conflicting decisions and have not adequately addressed the constitutional right-to-travel issues posed by such ordinances.

One question we face as a society—a broad question of justice and social policy—is whether we are willing to tolerate an economic system in which large numbers of people are homeless. Since the answer is evidently yes, the question that remains is whether we are willing to allow those who are in this predicament to act as free agents, looking after their own needs, in public places—the only space available to them. It is a deeply frightening fact about the modern United States that those who have homes and jobs are willing to answer yes to the first question, and no to the second.