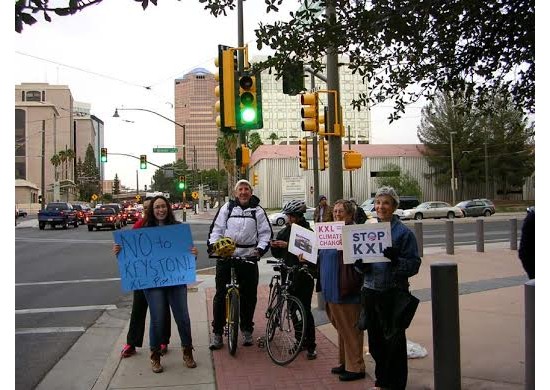 In response to the terrible environmental nightmare that would result from the Keystone oil pipeline being built, Tucson activists assembled at two locations with great visibility — at the Ronstadt center and at the Federal courthouse — at 5 o’clock on Monday, February 3. This was in solidarity with hundreds of vigils being held all over the country. At the height of the demonstration there were at least sixty people present. This is an impressive showing, considering that, like the government, the weather did not cooperate. The majority of people braving the chilly air were at the Ronstadt center, covering all four corners of the busy intersection at Sixth and Congress. Although there was a smaller number demonstrators at the courthouse, the response there from commuters was excellent, perhaps giving us some hope: experts discussing the issue on NPR say that President Obama could still be turned around on this issue (and would NPR lie?) if there were to be sufficient pressure from voters. This issue is of such importance that everyone should do whatever is possible to get the message across. There are many websites where you can sign petitions, here is one of them:

Sign the petition: An all-in moment on Keystone XL
act.credoaction.com
“The Keystone XL pipeline is a climate disaster. Keystone XL fails your own test for approval –- there is simply no question it “significantly exacerbates carbon pollution.” You must find that this pipeline is not in the National Interest and reject it.”

1 thought on “Two Vigils in Tucson”