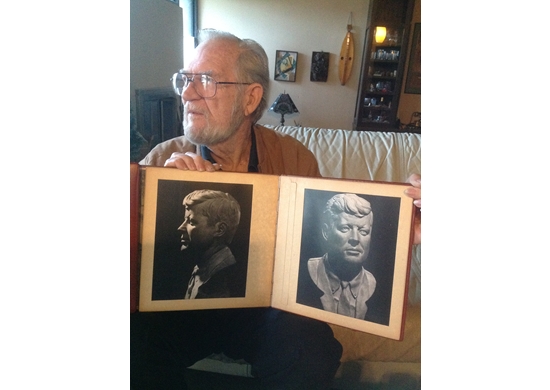 The John F. Kennedy bust recently ripped from its Tucson Presidio Park perch after almost 50 years leaves a hole in many a local heart. Sculptor Hardy R. Grant, 76, says his sculpture was forged of materials intended to last 3000 years. He says it’s time he shared his story of how it came to be.

Word spread not long after the 1963 assassination of John F. Kennedy that the Pima County Democratic committee was planning a sculpture contest with a $5000 prize for a bust of JFK. Hardy R. Grant and three of his starving artist friends heard the news, rushed from their garage studio on 6th St. and Tucson Blvd. to the nearest used bookstore and invested the few dollars they had between them in books with images of Kennedy.

Grant studied the pictures most of that night. He had sculpted clay busts from live models, but for this challenge it was only possible to view two dimensional representations of JFK. “There was this one photo, and when I looked at it,” he says, “I got it.” What he found in the photo was a common object—he thinks it was a dollar bill—that gave him the key to scale measurements for the head.

He started sculpting immediately. He doesn’t remember getting much sleep during the next three days as the replica of Kennedy’s head formed under his inspired hands. He estimates he logged 40 hours actually sculpting the bust. Finally, Grant got some rest.

Soon after, Grant called City Council member, Republican James Lee Kirk. “I have a Kennedy. Would you like to see it? I asked. When Kirk did see it he said, ‘Oh my God! Can we get this down to the next central meeting of the Democratic committee?’ ’’

The evening of that event Grant again had help, this time with getting the clay head safely to “some hotel”. There he and his friends found a small table on wheels, covered it with a white table cloth and placed the sculpture on it. He threw a sheet over the head and when the meeting assembled he rolled the table with its hidden art to the front of the room.

“When I popped the sheet off I almost fell back. Thunderous applause. At that moment it scared the hell out of me. These were waves of love. I understood why people would want to be actors. I applauded back because they taught me something. Epiphany! I realized the response was not for the bust. The accolades came because of the feelings people had for JFK.”

A woman on the committee asked, “How sturdy is it?” Grant pinched the base at the shoulder between thumb and fingers. “Everyone gasped when they saw how easily the clay could be gouged,” he says.

Grant says City Council member Jim Corbett took the committee lead on the memorial. The Democratic committee agreed to donate the cost of casting the bust in bronze, which Grant estimates totaled $400, the current equivalent of about $3,000. Bronze scrap is fluctuating around $1.80 a pound. A thief selling the stolen Kennedy head as scrap possibly might gross about $118. To recast the Kennedy portrait today would cost about $2600.

About the casting Grant says, “Nothing seemed to go smoothly.” He thought the original bust was too narrow and had a difficult time coming up with two dollars for new clay to expand the shoulders. The nearest foundry was in Prescott, a 500 mile round-trip. He used his Volkswagen van for the transport. “I don’t even know how we had gas for it.” It didn’t matter much, because the engine blew out on the way. His then wife rescued Grant and company so they could deliver the clay sculpture to Noggle Brass Works.

“The hair was reworked when it came back,” Grant says. He has a photo of the original clay sculpture and the hair is much finer in the original. “Most people wouldn’t know it changed a bit. Maybe somebody dropped something on the hair, like a wet cloth.” Grant admits events like that can be “distressing for an artist. But once you make something, it gets out of your hand and the world changes it.”

With the return of the 65 lb. bronze bust, the journey to Tucson memorial for the Kennedy sculpture was still not complete. Grant had to find a suitable pedestal for display. He scoured local rock and marble businesses searching for something appropriate he could afford. His last stop was Tucson Marble & Granite, family owned since 1917.

“I’m kind of a beggar at this point. I was looking at pieces of broken stone, thinking, how could I mix them with concrete and cut a base?” Grant says. “Finally, I asked, ‘Is the chief around?’ ”

Stan Cammack, now deceased, was owner in 1964. “Stan is huge,” Grant says. He describes the man filling a door frame. “He’s got these huge hands that have been handling rock his whole life. I explained my problem. He says, ‘Yeah, I think I might be able to do something about this. Can you show it to me?’ I took it down in my ancient Corvette and set it on a ledge. Stan touched the face very reverently with those gnarled hands, as gentle as the touch of a hand on a maiden. As he felt the features he was learning about the sculpture. I’m still thinking about making an aggregate, about breaking up marble and mixing it in colored concrete for the base.

“Stan says, ‘How about that tall one? That one do?’ He points to a beautiful tall granite rock polished on two sides. I’m overwhelmed. ‘I’ll think about it,’ I told him. “Yes! Yes, I think it will!” This is beyond my wildest dreams. I’m thinking about two dollars worth of clay and how that’s important to me and then epiphany again. The magnificence of this man (JFK) and the attitude people had for him is the force that’s moving this, not sculpture as usual, because you’ve got to fight for that.”

Next up was deciding what would be written in stone. “I was part of that process—in a sense I was. I had to cooperate with other people,” Grant says. He drew the American eagle with flag for the top of the stone and his hand formed the lettering. When he came back to cut out the image and words from the rubber mask to prep the stone for sand blasting, “Stan’s assistant had already expertly completed that tedious task. People really wanted to be part of this,” Grant says. “He saved me many hours.”

With everything ready, the night before the dedication Grant and Cammack’s crew anchored the stone memorial, weighing at least half a ton, in the park using technology available at the time, which consisted of some pulleys and mostly muscle. 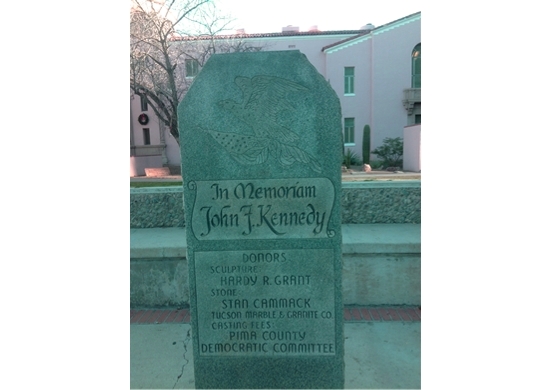 At the dedication on that first anniversary of Kennedy’s assassination, Grant had to make a speech. “I said, ‘There is no absolute hero in this process. It’s not just me. A whole lot of people made this happen.’ There was a priest there and he made an aside, but I heard him. ‘My God, an honest man,’ he said.”

Grant never saw the $5K from a contest that was probably always going to be more of a suggestion than a reality considering the sum. He donated his sculpture to the city. Another artist at the time complained to him that he had prevented a contest from even happening.

Grant did sell a few other castings of the Kennedy sculpture. One is in Ft. Bragg, North Carolina, at the JFK Special Warfare Center, another in Odessa, Texas, at the JFK Library.

“Sculpture is forms that let light make shadows fall,” Grant says. He believes the best light for his sculpture was facing south, the original orientation of the sculpture in Presidio Park. When the park was redone in 1968, the bust was removed and, when reinstated in 1971, it faced west, not in the best light, where it remained until stolen in mid-December 2013.

“I have no desire anymore to be famous,” the reclusive Grant says. “The dreams that drove that young man I once was were a long time ago.” About the Kennedy sculpture he says, “Of the things important in my life, this is about number . . . I don’t know.” He only made about a dozen portrait sculptures, almost all before he made the Kennedy bust. He has worked in many mediums since, such as wood and steel, radically changing his art often. Along with Venece, his wife of 34 years, he is a long standing member of the local Mensa chapter. The Presidio Park Kennedy is the fifth of his works to be stolen.

Grant says he hasn’t thought much about the events of 1964 in decades. This recent theft has brought a flood of memories as well as interest to his door. “It was a privilege to be part of this effort,” Grant says. “Lots of people really wanted to contribute what they could. It truly was a community project.”

3 thoughts on “Off With His Head: Sculptor Recounts Origins of Stolen Kennedy Bust”