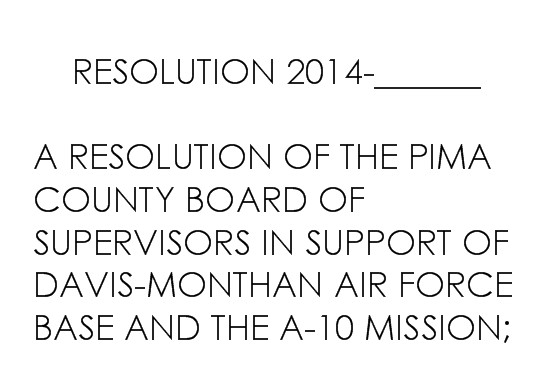 The wording of the Pima County Board of Supervisors Resolution in support of Davis Monthan AFB goes way too far. It is not in the interests of the vast majority of citizens living in Pima County for the County to support “any new mission, flying or otherwise, that could be supported by Davis-Monthan or other bases in our region.”

Residences, schools, churches, businesses, clinics, and even the U of A and Reid Park already endure far too many single-engine, single-pilot, loud aircraft flying over, multiple times a day. For their elected officials to now give an official “go ahead” to the Air Force to bring in whatever they wish, whenever they wish, to fly over whomever they wish, is beyond the pale.

What this resolution should support, is saving the A-10, which is the quietest, and safest Air Force fighter. It has an excellent safety record. Like most residents of Tucson, I have no opposition to its continued missions over Tucson and to expanding Davis-Monthan’s role in maintaining and flying the A-10.

This is a clear dereliction of the primary duty of County Board of Supervisors, which is to protect and serve the citizens of Pima County. Passage of this resolution without bringing it to the ballot for a vote by the citizens who will be affected, is a serious breach of the trust of Pima County citizens. This is an issue of serious consequence.

Thank your for your consideration in this important matter.