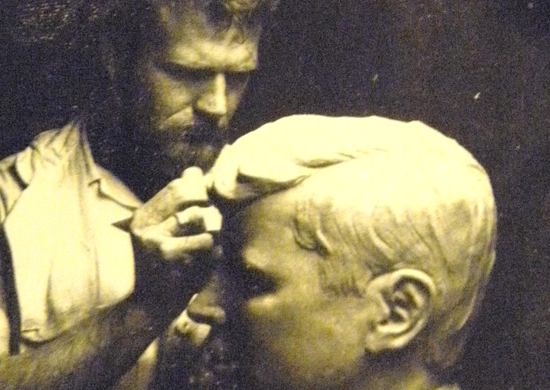 Now that the Kennedy bronze memorial head, stolen mid-December from Presidio Park downtown, has been recovered—found under a large pot in a wash, according to news reports about the couple who brought it to a recycling center—the question of what to do next was the topic of a meeting April 8 at Tucson Parks & Recreation Center.

Sculptor Hardy Grant brought one of the four castings of the head made in 1964. The differences between the damaged metal original and its twin are pronounced. Presidio Park’s head was weathered, but now it bears the scars of a pummeling.

“It looks like it was dropped off the back of a pickup going 30,” Grant says. Someone took metal grinding tools to the copyright symbol on the back and the nose appears to have been ground down also. There are gashes in the lips and bruises to the top of the head, an eyebrow, and the cheeks. More gouges mar the base.

Talk at the meeting with Peg Weber, head of Special Projects of Pima Parks & Recreation, and Mary Ellen Wooten, representing Tucson Pima Arts Council (TPAC), centered on three options: fix the found head, cast a new one, or purchase the finished head Hardy owns. He is asking 15 thousand for his exact, ready-to-go duplicate.

The city is seeking the cheapest solution. It was agreed that there would be a rededication of the sculpture once a decision is made and the artwork is returned to the park.

More on this story: Off With His Head: Sculptor Recounts Origins of Stolen Kennedy Bust

1 thought on “Kennedy Sculpture Found—Now What? (An Update)”