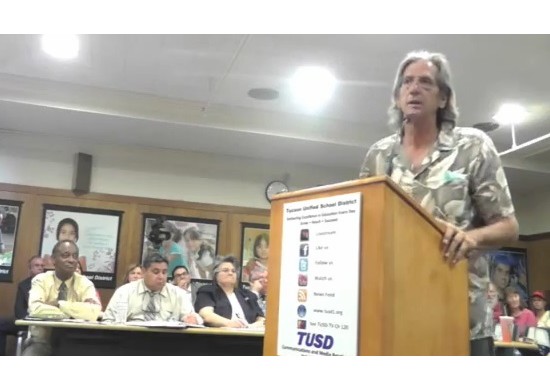 Billy Lolos, a key activist of Occupy Tucson since its earliest days, has died aged 61 after a short but valiant battle against liver cancer. Billy spearheaded Occupy’s protests on issues revolving around home mortgages and banks and was noted for adding both clarity and color to the Mayor and Council Meetings when the public was allowed to make comments.

Billy graduated from the University of Massachusetts – Amherst with a Bachelor’s degree in Psychology, but also worked as a salesman, dance instructor and in real estate. He joined in with Occupy Tucson shortly after it began its occupation of Armory Park on October 15, 2011, and proceeded to camp at all three of the Occupy Tucson encampments. Indeed, as a part of its incessant crackdown on Occupy, the police and courts banned him from the encampment at Veinte de Agosto Park, whereupon he became a familiar sight during General Assemblies as he impatiently paced back and forth, chain smoking, just beyond the court-determined line of demarcation.

During this time Billy was a primary force in organizing actions protesting home foreclosures, including attempts to disrupt the weekly auction of foreclosed homes on the veranda of the Pima County Administration Building. In perhaps the most successful of these actions, Billy held an auction of donut holes, “for pennies on the dollar,” that some twenty OT activists then bid upon, effectively drowning out the auction of foreclosed homes.

He was similarly central to a series of actions in which four Occupy activists would go inside a bank, do a “mic-check,” and then read out a proclamation condemning the bank’s practices before being escorted out by bank security staff.

In the summer and fall of 2012 he traveled back to the East coast, participating in the July 4 Occupy National Gathering and then, after being a part of some Occupy Wall Street actions, making his way down the coast to take part in the protests against both the Democratic and Republican Party conventions.

After returning to Tucson he continued to play an active role with Occupy Tucson until he was diagnosed with cancer in the fall of 2013. The last demonstration that he played a major role in was the September 11, 2013 March Against Drones, though he was still able to attend the occasional protest action until a few weeks before his death.

Chappell Howard: i hope he was surrounded by friends and family.

Victoria Dwyer: RIP Billy. that doesn’t sound appropriate, Billy never rested he took the bull by the balls literally. Billy your a good man and you will truly be missed.

Doctress Neutopia :He died on a good night– right after the blood moon.

Paul Gattone: Tragic loss, he was a unique individual and a devoted revolutionary.

Dick Kaiser: The next revolution will need far more Lolos (a type of energy) than we had in 2011-12. Billy was created for Occupy.

Sandy Mauck: My condolences to his family, to you and all who knew and “experienced” him. He was a unique individual!

Jessica Van Woerkom: Much love to him.

Joan Zatorski Puca: Sandy expressed it very well…”unique” is the word, indeed. I am certain he is continuing his campaigns against GMO’s from heaven. The entire Puca family sends its sincere condolences to EVERYONE, because Billy was certainly connected to all of us.

Christine Badke: So sorry for our loss. He is on whispering truths in the sunshine of the great Oaks so the seeds of the next generation know. Love you Billy Lolos

Jazz America No! I’m so sorry to hear this. What a courageous spirit who led such a passionate life! I’m honored to have met him and wish him well on his journey. RIP

Rorie Charles Mccauley: may he rest in peace

Tony Buontempo: Billy Lolos is gone to the ancestors. He died at 3PM last Tuesday, April 15. He will be missed at OWS. Rest in Peace, Billy Lolos.

Christine Badke: Rest in peace Billy Lolos ♡ you give em all your love and heart. Now you have a really big soap box… your voice will always be heard. The whole world is listening. On to greater works. Let the angels guide you on your journey. BIG ((((HUGS))))

Terry Higuera: Our dear friend Billy fought a brave battle, however we are mourning our loss. I am a better person for knowing him. Billy was the guy who helped me during my Dancing Under the Influence problem. He made sure my car wasn’t towed.

Michael Bucket: A good man. He shall be remembered, and he shall be missed.

Branden Ramer: I love you man, Im sorry I was so busy the last couple weeks. We are going to miss you everyday RIP

Kacee Dwyer : Rest in Peace Billy! A very passionate man who always had a strong opinion.

Paul Gattone: I am very sad to hear the news about the passing of Billy Lolos. I wish there were more like him in the world.

Jon McLane: This was the one man within Occupy Tucson that kept me on my toes, and even in the most challenging times kept me honest. Billy and I didn’t always, and actually rarely saw eye to eye, but we both had a better future for our earth and justice so deeply ingrained in our DNA it leaked through our pours. You will be missed Billy, and we will keep the torch burning in your absence.

Pamela Powers Hannley: Aww… poor Billy. Thanks for posting. He was a stalwart.

Doctress Neutopia: Will miss his fire. Billy died last night after the eclipse.

Emilie Hamilton: may he rest in peace.

Lee Stanley: A tireless worker for good causes. A great instigator at “Occupy Tucson”. He knew what needed to be changed and helped facilitate those changes. Thanks for your work on this earth. We miss you.

Mindy Marks: RIP Billy your suffering is over and now you can fly like with the angels. you will be missed.

Michael Migliore: …Lost a good one, but our loss is a gain somewhere else…

Mike Robins: Billy has, and will continue to inspire me. I will miss his presence, but his spirit is part of me.

Terry Higuera: My dear friend Billy, the world is more aware, more passionate and today saddened by our loss. I am a better person for have known you. Save me a place at the dinner table.

Zack Woods: Always a passionate speaker for the avocation of rights for the people of our country and of our world. Your strength and voice I will carry with me as a reminder to continue what you were not able to complete. You will be missed