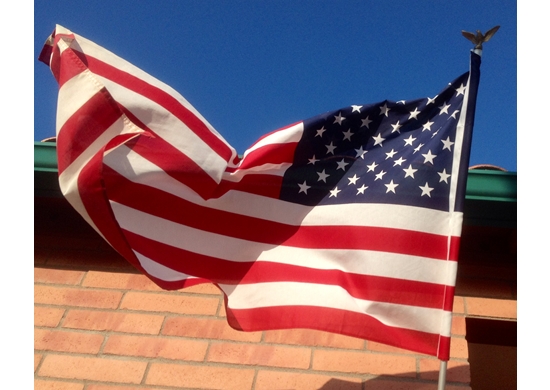 As executor of a dear friend’s estate, I took it upon myself to file for burial and funeral service grants totaling $600 from the Veterans Administration. My efforts have produced paper files inches high of ongoing appeals directed mostly to the now infamous Phoenix VA, a long-term relationship with support personnel from first Gabrielle Giffords’ and then Ron Barber’s office, a trip to Phoenix last July for a hearing with a Washington VA representative, and this tale.

Immediately upon the veteran’s death there was a problem. When I used his VA ID to report his passing, the VA representative on the phone disappeared for a long minute, then returned to ask if he had another name. Sixty-some years earlier, he had stopped using his adoptive name, the only one he knew when he was in the U.S. service after WWII. Following his discharge, he found his birth father’s grave in a Navy cemetery and took his father’s name. The adoptive name was not on anyone’s mind the day he died, nor on his death certificate.

Not a match, so no BINGO with the VA.

But how had they been giving him medical and pension benefits for the prior 15 years≠? Surely they recognized both names? No, they did not. It was up to me to prove he was legally tied to both identities. And so my long and sorry slog with the VA began.

We got the flag available to veterans, which was used at the burial and was presented to his daughter. We got copies of a certificate of service in the name no one knew with Barack Obama’s signature reproduced in shiny ink at the bottom. But the VA has been tight fisted with the $600, at an uncounted cost to American taxpayers.

For about two years, I took the appeals seriously. I do not regret learning many facts about my friend’s extraordinary life while trying to come up with proof to satisfy the VA that he used both names. I found WWII footage of Helgoland, an island in the North Sea off the German coast, because he had been blown up on that island when he was with the British merchant marines. Against unreasonable odds he survived battlefield surgery and died with the metal plate he received still in his skull. About 18 when wounded, he made a full recovery, a fact I shared with Gabrielle Giffords’ staff in those dark first days of her brain injury.

The appeals always stated if I didn’t answer them within a 30 day window, the case would be closed. There was no limit on wait time for the VA, which always demanded another appeal with a 30 day deadline. At Christmas appeal times I wished the faceless VA rep who stonewalled my requests to search for documents that would explain how the VA kept paying “the wrong guy” all those years very happy holidays.

Suspecting my appeals were not being read and out of ammunition, I next suggested that if the VA did not believe the two were the same that they immediately resume payments to the vet whose name they recognized, because surely he was missing his pension. A broken record, the VA wanted proof that he had gone to court for a legal name change. Knowing my friend, I was 100% sure that scenario never happened. I pointed out that use and acceptance of a name change without court order was a legal means of name change. Besides his VA ID he had a social security card and driver’s license in his chosen name. The VA was deaf to the substance of my appeals, but the fact that I made them managed to keep me in the game.

Why go to all this trouble? Because of the problem with the death certificate, the VA was the best avenue to keep both names legally connected for his family. And by now the cold denials of my heartfelt appeals were pissing me off. Then there was the chase. I was hooked. How would this end?

Three years in and approaching the ‘final’ appeals process, last July the vet’s son and grandson joined me at the hearing in Phoenix with the Washington representative. We were lead through bulletproof glass security doors accessed through a punch code to the elevator and up one floor to the hearing rooms. As we stepped onto the mezzanine the VA’s real problem came into focus like a page ripped from John Kennedy Toole’s famous novel. On all four sides, this floor was lined with rolling file shelving angled to maximize space use on the mezzanine, each shelf filled with boxes overstuffed with file folders. Facing out at the end of each shelf unit was a hand printed sign that read, “OVERFLOW,” and a date. The visual was staggering.

But what happened next astonished.

In the hearing room we were met by a friendly public servant seated in front of a huge—I estimate ten inches high, minimum—paper stack with two old style hole punches in the page tops and a long metal brad run through each. Procedures were described to us before we started and we were informed that this was a civil hearing and respectful conduct was expected. This made me wonder how frustration may have been expressed in the room in the past. For the audial recording required at the hearing, we were each asked to state our names and take an oath of truth.

The son and grandson told tales of their father/grandfather running away from his adoptive parents’ home to join the war effort and of listening to his war stories. They knew the name he used to have well, although that was not their legal name.

The representative pointed out that this case was obviously not about the money. I thought of all the vets with health issues who were battling the VA for benefits. I thought of the stacks of paperwork outside those doors and felt more than a bit foolish. But then he demonstrated he had actually read the file. “He lived a remarkable life,” was his comment about the deceased. Next, he flipped open the paper stack to almost the middle and, carefully removing the top half of paperwork, extracted a legal document we each witnessed, signed by the veteran stating that he had used both names in his lifetime. There it was: the smoking document, the holy grail of my crusade against this kingdom of paperwork.

The representative rushed to close the hearing. Not so fast. My hand smacked down on the table and, civil anger in my voice, for the record, I said, “The VA has always had the document it needed to prove his identity.” None of this had to happen. In the flood of Phoenix paperwork, and who knows how much more was submerged in the depths of this building, this lone worker from Washington had found the single paper that had always been available.

It was over. Not.

It’s the VA, where no one can make a decision. We were informed the claim would go to another level of bureaucracy, symptomatic of the existing bloated, dysfunctional system. (see VA Gave Bonuses For Shoddy Claim Processing). And, no, I could not have a copy of the deciding document until a final decision was made.

A year later, still waiting, it is almost four years since I first filed the claim.

In the aftermath of the current VA scandal that started in Phoenix over falsification of wait times for vets seeking medical care, I think of my friend who avoided the VA until the final years of his life and who would no doubt have advised me to spend my time in more fruitful ways. I think of the files on the Phoenix mezzanine and of the individual lives and stories they represent, each waiting its final decision.

I would like to believe our government is very frugal, but I fear the truth is much darker, overwhelmed, and hiding in a file box somewhere in a vast conglomerate of corruption and incompetence, far from anything functional.

1 thought on “If You Think the Living Have a Hard Time Collecting Benefits from the VA, What Chance for the Dead? or, A Fool’s Errand”