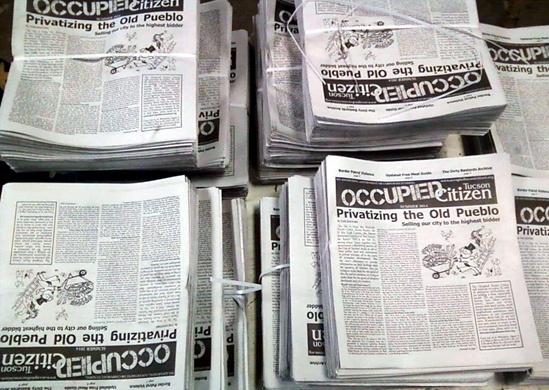 The fourth print edition of the Occupied Tucson Citizen has just come off the presses with a print run of 10,000 copies and is now being distributed across Tucson and southern Arizona. This issue features our most in-depth article yet, “Privatizing the Old Pueblo,” which touches on everything from the attempted sale of El Rio Golf Course to attempts to move the Ronstadt Transit Center and, above all, the lack of transparency in the city’s dealings with private developers as our public officials attempt to sell off public land and institutions.

Find a copy in a cafe, occupied newspaper bin, community college or university near you. Or stop by our office at the Global Justice Center at 225 E 26th Street.