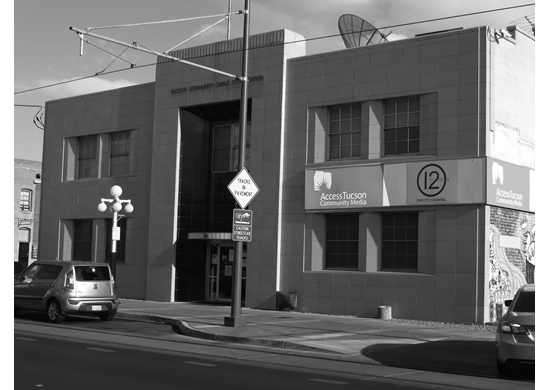 Access Tucson started public access programming in 1984. At one time, Access Tucson was recognized throughout the country as being one of the best community TV stations in the nation. It has been a vehicle for producers to create and air shows for 30 years. Membership is free to Tucson citizens. Shows range from Christian evangelists to progressive talk shows.

Everyone is a star at Access Tucson. The door is opened for anyone to come in, sign up to produce a show, get training in studio production, learn how to upload videos on Youtube, and take workshops on how to find underwriters for their shows.

Summer classes teach students to run cameras and do video editing. There is also a free computer lab that anybody is welcome to use. Its mission: “Access Tucson is a community resource facilitating public dialogue and participatory democracy through citizen access to television and other electronic media.” Serious budget cuts started to happen at Access Tucson, which greatly limited its ability to carry out its mission.

Cable subscribers fund the station. This funding source was made as a City contract with the Cable Company to use City property to run its cables. When the agreement was first made, money from the cable subscribers went directly to Access Tucson. During that time, operation funding was close to a million dollars.

When the economy got bad, the Mayor and Council decided to have the Cable Company’s funds go into a general city fund. Then, they began cutting back funding to the station. In 2013, the operating funding was down to $300,000 and Access Tucson was only open two days a week for studio production time. But when this year’s funding cycle came around, it was shocking to the membership of Access Tucson that the City Manager requested Access Tucson be evicted from their Broadway building and their operating budget cut to zero.

After much struggle to regain the building and a budget, the Mayor and City Council gave Access Tucson a six-month budget. During this time, the Mayor made it clear that it is Access Tucson’s responsibly to find new revenue streams. Access Tucson has been told that their mission of free speech is not financially sustainable and that if they are to survive in a commercially oriented world, they, too, must become business savvy, compete in the market place, and learn how to make money.

Talk of charging membership fees has been raised, which means that poor people might no longer have the money to join Access Tucson. Killing the spirit of equal access to community TV production is symbolic of the end of democracy and the rise of oligarchy that we are currently experiencing on many levels of society. Since 1984, “1984” ironically being the title of George Orwell’s prophetic work about governmental tyranny, Access Tucson has been a center for watchdog journalism protecting community values and free speech. With the privatization of public resources by the Mayor and City Council, is it any wonder why they are out to destroy Access Tucson? There is no talk of the government’s Channel 12 being phased out of the budget even though it has been cut. Can you guess why not?

This is not the time to hold back. Get involved with community TV. Produce a show. Exercise your freedom of speech now. It might be your last opportunity, unless there is a public outcry or perhaps an Occupy Access Tucson!