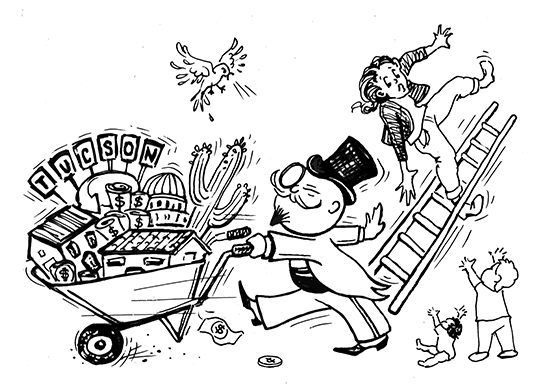 When people talk about a “cutting edge” economy, how often are they thinking of Tucson? Probably not very often. Given our low-wage economy and our ranking as the 6th poorest city in the United States, a lot of other places, such as Silicon Valley, would come to mind first. But as an increasingly globalized and automated economy hits its stride, we might rightfully consider ourselves as being cutting-edge by the very measures cited above: our poverty and lack of good job opportunities. Which is to say that the age of the “precariat” is upon us.

What is the precariat?

Graduates of PimaCommunity College often find themselves certified to work in fields which were at one time in high demand, but the work for which they studied is no longer available. The service or part-time jobs that they must take instead are not sufficient to feed their family and they must work two or more jobs, and may even need to get food stamps. As indeed must many of the people who work at Walmart and other retail chains, who live a similarly precarious existence.

A Ph. D. graduate from the U of A might well find her- or himself in a similar situation, doing transient work — without benefits — as an “adjunct” faculty member. The same for school teachers who used to work at TUSD and could plan on retiring from there but who now find themselves working in a charter school on a year-to-year contract with no teacher union support.

The precariat (precarious + proletariat) is a new class, sprung from our changing economic order.  Technological, especially digital, advances have increased the pace of automation and of outsourcing. This in turn has allowed corporations to eliminate jobs and thus weaken labor unions, compromise democratic government, and make it ever easier for corporate interests to impose “austerity” measures and “downsizing” economic rationales. The end result has been an ever increasing pool of transient workers struggling to make ends meet and whose lives increasingly resemble those of the long-exploited immigrant workers, whose low pay and lack of job security and benefits made them the prototype of the precariat (or, better, its founding members).

So if you ever wondered what happened to all those people being “squeezed” out of the middle class, you now have your answer: they (you?) have joined the precariat.

In former industrial states such as Ohio and Michigan, relatively well paid, secure jobs with full benefits were once plentiful and formed the cornerstone of the local economies. As steel, auto and other industrial workers were laid off or made redundant, they were forced to take transient, low paid jobs in the service industry and these jobs then became the cornerstone of the—now much poorer—local economies. But such jobs have always characterized Tucson’s economy. Indeed, it has long been a great source of frustration to residents and city officials alike that we have such a large pool of low-wage jobs (at Walmart, McDonald’s, in the hotel industry, at call centers, etc.) but only a few higher wage jobs (e.g., machinists at Raytheon).

But even as the rest of the country’s economy increasingly looks like Tucson’s, there is nothing to stop us from slipping further. First off, there is the incessant pressure of “budget cuts” (such as we’re experiencing with the current budget cuts that threaten to eliminate 92 city jobs) as the rich and corporations pay less and less in taxes and take ever more from the public coffers. But there is also the ever-present threat of out-sourcing (as we’ve seen with everything from call center jobs to radiology jobs) and of automating that which can’t be outsourced. The fact that US automakers can make the same number of cars as forty years ago with a quarter of the workforce has forced many skilled, unionized workers into the precariat, just as the advent of Facebook and WordPress has seriously impinged on the livelihoods of many of those who, told that it was the wave of the future, enrolled in web design programs ten years ago. And then there is what happened to our local journalism community: Craigslist, which employs a few dozen people, has triggered a collapse in advertising revenue of newspapers leading to the loss of thousands of jobs at newspapers across the country, including the death of one newspaper in Tucson (the Tucson Citizen, which we then Occupied) and massive staff reductions at the Arizona Daily Star.

Where do we go from here?

Writers , such as André Gorz and Guy Standing, who have long been writing about and addressing these issues argue that we need some new political thinking to address the needs of this emerging class of the precariat. They point out that it will be more difficult for the precariat, given that they tend to go from job-to-job, to become unionized than it was for the traditional working-class, thus requiring more informal organizing tactics (which the unions are now starting to use). But the rise of the precariat will also give rise to new demands specific to the changing economic situation. Though the most urgent demand of the precariat is a traditional enough one—a raise in the minimum wage from the current $7.25 an hour to a living wage of $15.00 an hour—others that have been proposed are more reflective of this being a “new” class. They include:

1) If work increasingly no longer fits the traditional model, then benefits should no longer be workplace-based. Make it possible then for the members of the precariat to get the same benefits package (health insurance, unemployment insurance, social security payments, disability and workman’s compensation) that workers receive in traditional jobs. Our government has taken a first step—no matter how limited and flawed it might be—toward breaking the tie between benefits and one’s job by passing the Affordable Care Act. It should now follow suit in the other areas as well.

2) If there will be, due to automation, less and less work, then we should “all work less so that we might all work.” A highly successful trial version of this has been undertaken in Germany and other European countries in the wake of the 2008 recession when factories, instead of laying off some of their workers and having the rest continue to work full-time, instead reduced the work hours of all the workers so that nobody got laid off. The government made up for the difference in pay with the money it saved from not having to pay unemployment.

3) The most far-reaching of these demands is the Universal Basic Income (UBI), which would guarantee everybody a minimum income in addition to any other income they might receive. This basic income would be sufficient to cover the necessities of life, including the benefits package mentioned above, and would be paid for in part by ending many or all of the means-tested programs that would no longer be necessary (e.g., food stamps). It would be liberating for the precariat in that they would no longer need to live in fear of losing their basic livelihood if their current job is automated, outsourced or downsized out of existence; in addition, they would not need to spend endless amounts of time applying for means-tested benefits if their jobs did disappear and they would not have to take any old job that comes along to get back in the workforce, which would force employers to raise wages and improve work conditions.

In a recent New York Times column titled “In Sympathy with the Luddites,” economist Paul Krugman neatly sums up the precarious situation we face: “If the picture I’ve drawn is at all right [i.e. that, increasingly, “highly educated workers are as likely as less educated workers to find themselves displaced and devalued, and pushing for more education may create as many problems as it solves” due to the debt incurred], the only way we could have anything resembling a middle-class society — a society in which ordinary citizens have a reasonable assurance of maintaining a decent life as long as they work hard and play by the rules — would be by having a strong social safety net, one that guarantees not just health care but a minimum income, too. And with an ever-rising share of income going to capital rather than labor, that safety net would have to be paid for to an important extent via taxes on profits and/or investment income. I can already hear conservatives shouting about the evils of ‘redistribution.’ But what, exactly, would they propose instead?”

1 thought on “Tucson: Cutting-edge of the Precariat?”