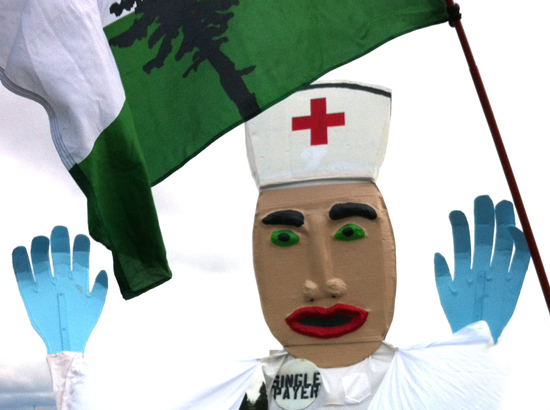 A Few Table Scraps from the Corporations Aren’t Enough

I was surprised to see so many people demonstrate in support of the Obama health care plan when the Supreme Court was hearing arguments over its constitutionality a few weeks ago. I was even more surprised at my own concern over the possibility that the Supreme Court might strike the plan down, as I consider Obama’s plan a sell-out to corporate interests. But I shouldn’t have been surprised on either count, as “Obamacare” is above all a reminder that, in corporate-owned America, the best we can hope for is to get some table scraps from the corporations. And this, in essence, is what the Obama plan amounts to.

That many had hoped for better when Barack Obama was elected president is hardly surprising, given the catastrophe of our health insurance system. In this regard, it is only necessary to note here that the privatized American health care system ranks 37th in the World Health Organization rankings for overall performance of a healthcare system* while it spends, on average, over twice per capita as other industrialized nations. Because of this poor performance, calls for a single payer, or at the very least the now almost mythical sounding “public option,” resounded in the wake of Obama’s victory, as our health care system’s performance against the single-payer systems of the other industrialized nations was a clear refutation of the logic of our ruling establishment’s free market ideologues. According to them, a privatized system should provide the best care at the lowest cost. The fact that it has instead provided mediocre care at a high cost made it obvious that we needed to turn to a socialized model of health care insurance.

That we instead have the mishmash of the Obama plan attests to the overwhelming power that the corporations have in the United States. But, at the same time, it is important for us at Occupy to be aware of the ways in which the plan can provide some help to people who are currently uninsured or faced with losing their insurance. Given the scale of the crisis of the current model of healthcare delivery in the United States, even the corporations had to relent and give a few concessions to the 99%. And given the size of the Obama plan, even these concessions — what I’ve been calling table scraps — will make a difference to millions of people. Does this justify Occupy supporting it? Given the egregious give-away of public money to the insurance companies that is the key component of it, certainly not… But it does mean that we should be considered in our opposition to it.

Though the Republicans would have you believe that the Obama plan — the Patient Protection and Affordable Care Act (PPACA), which he signed into law on March 23, 2010 — is a socialist conspiracy, it bears very little resemblance to the Canadian health care system or to the health care systems in Europe, Australia, New Zealand, or in any of the other “failing socialist states of the world” (as the Republicans characterized them in their campaign against the reforms) that produce much better results than our system does. This is because, fearful of a repeat of Bill Clinton’s failed attempt at more serious health care reform in 1993 and 1994, Obama carefully tailored his reform package so that the insurance companies, pharmaceutical giants, and medical establishment would give it their blessing.

His reforms, then, are essentially an attempt to smooth out some of the rough edges of the current system. Insurance companies will no longer, for example, be allowed to reject people because of pre-existing medical conditions (which currently makes medical insurance an impossibility for a large group of people, especially those who need it the most), nor terminate somebody’s coverage when they do get sick, something which isn’t infrequent in the current system (when, for example, the insurance company seeks out and finds some technical error in the now-sick person’s application, and then declares their coverage null and void). Most importantly, it will provide income-related premium subsidies that will help extend at least some form of coverage to 25 to 30 million previously uninsured Americans, as well as tax-breaks for smaller employers who are currently having trouble paying for their employees’ health insurance. It also includes some provisions for instituting more preventive health practices.

But it will not create a national health insurance plan. The government will not be a provider or direct player in the realm of health insurance and so Americans under the age of 65 will still be denied that card guaranteeing them medical care that the citizens of the rest of the industrialized world take for granted. Instead, the government will act as a coordinator, providing a web-based “central marketplace” of private plans through which most employers and individuals will have to go to get health insurance. Thus, there will still be the same complicated system of plans, forms, and bureaucracy as there currently is, both for doctors and patients. Indeed, for most people currently struggling along on private plans the only significant change – though it is an important one — is that the reforms will subsidize the premiums of a basic health insurance plan (comprehensive, but with a high deductible) so that we won’t have to pay more than nine percent of our income for health insurance, no matter what our age. Thus it averts the catastrophic scenario of having to pay (but not being able to afford) what can amount to twenty-five percent or more of one’s income by the time one reaches one’s fifties.

But herein lies the rub, and the reason why, besides the fact that it only mandates a minimal set of regulations, the insurance companies didn’t seriously oppose Obama’s reforms. Obama’s plan will, at public expense (and if the Supreme Court allows it), deliver tens of millions of customers into their (still) overpriced and under-regulated health plans. As the leaders of Physicians for a National Health Program declared in a recent statement, “Insurance firms will be handed at least $447 billion in taxpayer money to subsidize the purchase of their shoddy products. This money will enhance their financial and political power, and with it their ability to block future reform.”

This objection becomes especially clear when we see how the premium subsidies work. The difference the PPACA will make to a low-income family of four that will only have to pay a thousand dollars a year for a plan that they would currently have to pay twelve thousand dollars a year for is clear. The problem is that the government, meaning the public treasury, will have to pay the insurance companies the remaining eleven thousand dollars. And because the government has no ability to negotiate with the insurance companies to lower the premiums or the pharmaceutical companies to lower the prices of drugs (as they would under a national health care plan), there would appear to be little to slow the continuing rapid increases in health costs, thereby threatening the long-term viability of the PPACA when the government is already deeply in debt.

Moderating the Tyranny of the Free Market

But though the political progressives have been bitterly disappointed by the reforms, they should be seen less as an indictment of the Obama administration specifically than a testament of the sheer power of the 1% at controlling this country’s political and social agenda. Even in the wake of another catastrophe of non-regulatory, free market economics, the financial meltdown of 2008, the Obama administration only managed to pass some very weak reforms (Wall Street Reform and Consumer Protection Act of 2010) when a return to the New Deal regulatory structure was clearly needed.

It will certainly not bode well for the country’s future, nor for the many uninsured or marginally insured, if the free market hardliners — that is, the Republican Party — manage to destroy even this tentative first step toward reform by using their influence on the Supreme Court justices to overturn key provisions of the bill or their majority in the House of Representatives to deny funding for the program (nor does it bode well for the country’s future if the Supreme Court establishes a precedent that forces Americans to buy private insurance policies in our ever more corporatized society).

Considering the vast amount of money this plan will cost, it’s not a particularly good value. But until we can change the corporate- and 1%-driven dynamic of this country, it’s apparently the best we can do. And this is further testament to the importance for Occupy and other related movements to continue to grow. A few scraps from the corporate table might help some people in the short-term, but it hardly represents any kind of solution to providing the American people with the universal right that is health care.

*page 155 of “The world health report 2000” by the World Health Organization. The report itself does not organize the countries by their “Overall health system performance”. Instead the countries are listed alphabetically and you can find these rankings at the very right.