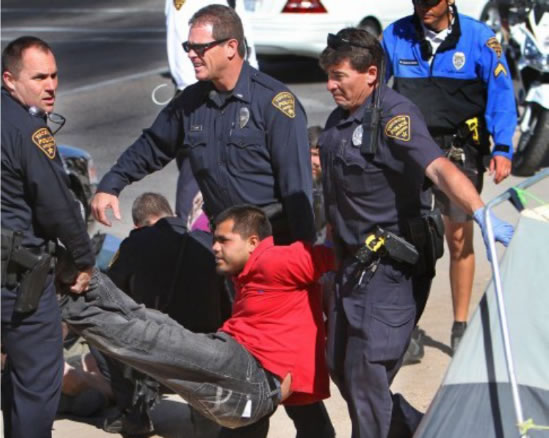 On Friday, March 23, Paul Gattone, a lawyer representing members of Occupy Tucson, held a press conference to protest the Tucson Police Department’s recent actions against the occupiers at Veinte de Agosto park downtown. Despite the fact that five occupiers had been arrested two nights before the press conference, and two the night before, no mainstream media turned up. One might think that seven arrests resulting from the police going after political activists would seem to warrant some news coverage, but the decision makers at the mainstream news outlets in Tucson decided not to cover either the arrest of the occupiers or the press conference denouncing the police actions.

Some of the extra-legal actions and abuse of authority by the Tucson Police Department that were highlighted in the press release include:

The unlawful actions towards and abuses of Occupy Tucson by the TPD warrants investigation and reporting. However, the mainstream media only seems to be interested in scratching the surface of the story and not taking a longer view of our movement. It’s true that the Arizona Daily Star and the local television news stations did provide some coverage of Occupy in the early days of our encampment, but that soon changed. First, reporters stopped visiting the encampments and instead began to rely on “official sources” for their information about Occupy Tucson, meaning especially the Tucson Police Department; then they simply stopped covering us.

This lack of media coverage presents a problem for Occupy Tucson because, in the modern world, it often seems that if you aren’t covered in the mass media, you don’t exist. Perhaps this is why members of Occupy Tucson, even though we undertake actions of creative disobedience that result in a whole string of arrests, are then asked by members of the public whether we still exist because “I never hear anything about Occupy Tucson anymore.”

On the positive side the experience of being frozen out of the mainstream media has reminded us at Occupy Tucson why it is that alternative media is so important. And why a publication like the Occupied Tucson Citizen is so necessary.