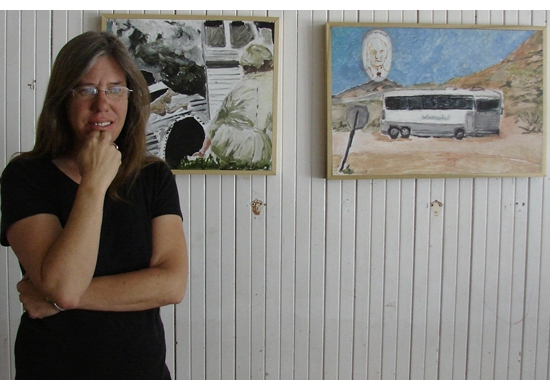 Circumstances surrounding the recent police shooting death of Michael Brown, 18, in Ferguson, Missouri, resonate with some of the twenty-eight killings by U.S. border agents since 2010 in the following ways: an unarmed suspect allegedly turns the enforcement agent into the victim; the suspect is killed; release of the agent’s name is delayed; loved ones of the deceased question why a non-lethal method was not used on the unarmed person; human rights groups like Southern Border Communities Coalition (soboco.org) protest the subsequent investigation as predisposed to bias “by identifying the person shot and killed as a suspect at the initial stages of the investigation.”

Along the border with Mexico the deceased are most often alleged to have been “rocking”—throwing rocks.

How is a rock different from a Glock?

Conceptual artist Laurie McKenna has been asking that question and similar ones over the last seven years as she developed an uncommon art response to the use of excessive force on the border with Mexico.

In January 2007 local news covered the shooting death of Francisco Javier Dominguez Rivera, 22, by a U.S. border patrol agent who pursued four people on foot from his vehicle on the outskirts of Bisbee near the fence with Naco, Mexico.

“He got them to sit down. They were in a submissive state. One of them was accused of picking up a rock and the agent shot him. Forensic evidence was that the bullet came from above. It was his word against the migrant eyewitnesses,” McKenna says.

The Corbett shooting, named for agent Nicholas Corbett, resulted in murder charges against the agent, the first of its kind in decades, and a hung jury, twice.

“The prosecution was not surprised,” McKenna says. “They were trying very hard, but they knew people’s minds wouldn’t change no matter what the evidence. And that’s what started my wanting to examine the use of excessive violence. As a resident, the only people that crossed my path that were a threat to me were the Border Patrol agents because they were the only ones I ever saw that were armed.”

“Searching ‘border patrol agent shooting,’ I found all these other videos [of shootings] and then I said, ‘I could make a video because I am a film maker,’ but I knew the world is full of these videos and then you read the hateful responses: ‘This person was a dog. This person deserved it.’ I knew I needed to make something different. Something that was the opposite of a video, something contemplative, something quiet, something that’s quiet for me to do.”

On the Tucson sector Border Patrol Union website McKenna found a black and white close-up photo labeled as the Corbett shooting of someone holding a rock, about to throw it at an agent.

“I wanted to do something that wasn’t technical. I wanted to do these drawings that were little documents of events. Rock, Paper, Fence was born when I first drew this shooting that I thought was the Corbett shooting.

“Then there was a kid named Ramses [Baron Torres, 17] on January 5, 2011, and he was going over the fence and was shot on the Mexican side. He was throwing rocks, so they shot him.

“Then there was Carlos La Madrid, 19 [March 21, 2011], American, in Douglas, 18 miles from where I live. There was a ladder on the American side to get over to Agua Prieta. He was running [marijuana] bundles, but, again, he was shot in the back and killed and said to be throwing rocks. No way you can climb a ladder when you are in a hurry and be throwing rocks, so then it was that other people were throwing rocks. So you shoot him in the back?

“There was this image from the Mexican side of the border and you could see the ladder through the fence and that image really got to me. A ladder is for getting somewhere, climbing the ladder, safety.”

McKenna first mounted a showing of her paintings and drawings, some juxtaposing a “Glock” next to a rock, others of what she calls “border ephemera,” like the Wackenhut buses used to transport illegal border crossers to and from detention centers that became ubiquitous in the area. The white bus, she says, “had bars on the windows. I would see it going east, [then] west on Highway 80 nine in the morning, noon, five, eight pm. It looked empty, just like a ghost bus.

“I was feeling this presence, this oppressive presence of Homeland Security. So I did a painting of the Wackenhut bus,” she says.

“I used to be a film maker, but I’ve gone to iconography instead of storytelling. And the way I drew and painted, I didn’t want to distract everybody with a style that was, ‘Wow, that’s a really great illustration. I love the color.’ I wanted it to be barren. So that was tough, to make it kind of pathetic, but not amateurish. I wanted to strip it down and make the paintings kind of unattractive to somehow carry the ugliness of what I was illustrating.”

McKenna set up a six-week showing in a Bisbee gallery. The art was paired with text, which she found people did not read. Rock Paper, Fence as an installation was by her account, “ineffectual.”

“They didn’t even know what they were looking at. So, I was, like, okay. That didn’t work.” She decided instead to make a book.

“People read books, right?”  But when she thought of the options–a coffee table book, an art book, an average sized book—she says she knew the same thing of people only looking at the art would happen again.

McKenna decided on a miniature book “because it’s not intimidating. So it’s intimate, small, it’s black, it’s shiny, it fits the attention span, which doesn’t reflect so good on the general public.

“The little book is an action. It’s not a catalogue of the art show. It’s not like, oh, this is what represents a show. It is an art piece. It’s activist art.

“When I do give it to people who have no idea of what I am handing them, they do giggle. It’s hard for me. I don’t want to trick them. It’s not like a practical joke to have them go, ‘Oh, cute,’ and then go, ‘Oh, God.’ It feels like I am being a practical joker, but no one gets mad at me for that.

“There have been more shootings, there have been more deaths. There are going to be more after these  [Jose Antonio Elena Rodriguez, 16, Nogales, Sonora, October 11, 2012; Margarito Lopez Morelos, 19, Baboquivari Mountains, Arizona, December 2, 2012; Gabriel Sanchez Velazquez, late 20’s, near Apache and Portal, Arizona, January 16, 2014] because it’s just so endless. I was going to add them, but I realized it was stopping me. I needed it to be finished so I could give it a life. So now I am going to distribute it to shops where it can be an unexpected object that someone can pick up and say, ‘Whoa!’ and they’ll learn something.”

In 2012 McKenna was surprised to find out that her initial drawing of the Corbett shooting was based on a false photo posting.

“It wasn’t even the same event,” she says. The photo was from a different shooting in Calexico, California. “And even he does not deserve to be shot. But someone put it up there [the Tucson Sector Border Patrol Union website] to make it look like [the man shot in Arizona] was a menace.”

What McKenna hopes happens when someone buys a book is that they “give it to someone else. And I want it to go to places where it will be unexpected, and not just live in this area. I want people to think about the devaluation of life.

“It starts really easily when we mark different people. ‘They are illegal aliens.’ Well, that’s real easy to grasp.

“It’s a bad reflection on society. It’s just eroding the sanctity of life and what protection is. You know, the sanctity of ‘We trust you. We pay you.’ People are getting shot by cops everywhere, not just at the border. I want people to think about it in their own local terms.

“If one tiny segment of humanity can be dehumanized to the point where it is not worth charging someone—an agent—with murder for using excessive force, then we’re all dead in the water.”

In June 2014 a federal appeals court ruled that the family of Sergio Adrian Hernandez-Guereca, 15, killed in Ciudad   Juarez, Mexico, June 7, 2010 has the right to sue the El Paso Border Patrol agent who shot him across the border. The boy was allegedly “rocking.” (1)

In July of this year the mother of Jose Antonio Elena Rodriquez, 16, who died on October 10, 2012 in Nogales, Sonora, after being shot through the fence from Nogales, Arizona, for alleged “rocking” filed a civil suit in Tucson. According to the Arizona Republic, which filed Freedom of Information Act requests, “identity of the agent or agents who shot the 16 year-old remain secret.” (1)

In August in Laredo, Texas, a federal appeals court determined a border agent could be sued for killing Guillermo Arevalo Pedraza, 37, who was shot on September 3, 2012 while picnicking with his family on the Mexican banks of the Rio   Grande, in an alleged “rocking” incident. (2)

Rules were issued in March of this year by the Border Patrol telling agents to avoid situations requiring deadly force by not stepping in front of moving vehicles requiring them to shoot the driver to avoid being killed and by taking cover or moving beyond the reach of thrown rocks. (3)

There has not been a shooting death on the border in the few months since the new rules took effect.

3 thoughts on “Rocking the U.S. Border with Mexico”