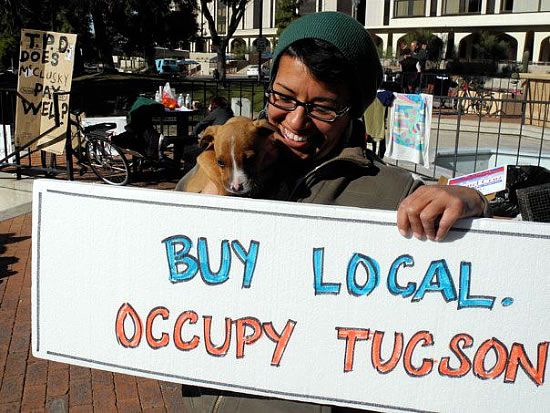 Occupy Tucson has been the best and maybe the worst thing to ever happen to me. When I showed up at the park October 15th, I knew very little about Occupy Wall Street. A week later I rode over with my tent, a very thin blanket, and a sleeping mat. I didn’t know anyone so I stayed in my tent for the entire evening and waited for the police to show up.

My family and friends thought I’d lost my mind, but they were supportive. I don’t think I knew just how much I would be putting on the line. I don’t believe any of us knew the battle ahead. That night I stayed awake until 10:30 because that’s when TPD was supposed to arrive to hand out citations. At some point I drifted off to sleep but left in my hearing aids. I’m profoundly deaf, and I feared I wouldn’t be able to hear them coming if I fell asleep.

I woke up to flashlights in my eyes and my tent shaking. I unzipped my tent and poked out my head and stood up. My tent was surrounded by men in uniform. All this for such a small woman, I thought. They asked if I was aware of the park rules and that I was in violation if I remained on site.  They gave me the option to leave. I told them I was staying.

I was shivering, partly because it was chilly but mostly because I was terrified. I signed the citation and crawled back in my tent and laid out this piece of paper and I knew that I would stay. I thought we’d be there for two weeks, but we were there for three, and even longer at two other parks. We fought  the rain and cold, and we fought each other.

But our greatest battle was with the city of Tucson. Night after night The Tucson Police Department showed up to cite anyone in the park. Sometimes they would rip Occupiers’ tents to shreds. Toward the end, most people either left or avoided citations by standing on the sidewalk.

It was inevitable that we would have homeless people in our occupation, and with them came problems with addiction, mental illness and violence. Many Occupiers decamped, out of fear of being targets. TPD refused to remove the troublemakers and finally we couldn’t successfully police ourselves.

But I continued to stay. Occupy Tucson became my life 24/7. I’d wake at 4am to go to work, and afterward come right back to the park. I wasn’t getting enough sleep or eating enough. My friends and family saw me only occasionally and were very concerned.

After my arrest I was told I could not go back to any park in Tucson, so I gave my tent to a homeless woman and began to sleep on the sidewalk. One night I woke up to my sleeping bag covered in frost. The temperature that night had been 19 degrees.

Our porta-johns had been taken away, the park was in shambles, and most of the people occupying were homeless. But these were people I had become friends with, and at this point I think I was staying out of guilt. I felt guilty for having a warm place to go to at night, for having access to a bathroom and warm food, for having people that loved and cared for me. It had never been so clear to me how fucked up our society was.  How could I abandon them? I was angry at my fellow Occupiers for throwing in the towel, for leaving, for not caring enough. I was angry at our 7,000 fans on Facebook who never showed up. I was angry at my family and friends for not understanding why I would risk bodily harm, cold, rain and sanity for this.

I finally did leave the sidewalk. The first night back at home, I slept on the floor.