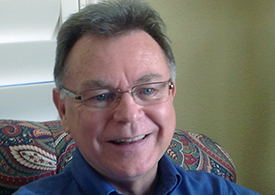 There was a time when the border between Nogales, Arizona, and Nogales, Sonora, was actually a fence, something that might be between backyards. To either side of the two Nogales’ flimsy barrier were miles of land, open, unencumbered, looking much the same as they had for millennia.

Alberto Rios’ father was Mexican. As a teenager he crossed the border from Mexico through the Nogales port to live with his aunts, whose house was left on the Arizona side when the international border fence first went up. He joined the American service in World War II and during his deployment met the English woman who would become his wife. After the war the couple moved to Nogales, Arizona, where their two sons were born. The boys were American, but the parents had to follow the long, legal road to U.S. citizenship. Alberto Rios grew up in a bi-lingual, tri-cultural home, leaving him with an uncommon perspective on international boundaries and race relations.

Rios, a University of Arizona graduate with degrees in English and Creative Writing, has won numerous poetry and writing awards. Thirty-three years ago he began an academic career at Arizona State University he continues today.

Rios has published ten books of poetry, three short story collections and a memoir about his boyhood in Nogales.

In an excerpt from a longer interview Rios reminisces about the day John F. Kennedy was shot and why the U.S. border with Mexico was never the same after.

The poem below is embedded in the wall of Nogales’ new port of entry. Rios’ tenure as Arizona Poet Laureate extends through 2015. His poem stands as long as the wall.

A weight carried by two
Weighs only half as much.

The world on a map looks like the drawing of a cow
In a butcher’s shop, all those lines showing
Where to cut.

That drawing of the cow is also a jigsaw puzzle,
Showing just as much how very well
All the strange parts fit together.

Which way we look at the drawing
Makes all the difference.
We seem to live in a world of maps:

But in truth we live in a world made
Not of paper and ink but of people.
Those lines are our lives. Together,

Let us turn the map until we see clearly:
The border is what joins us,
Not what separates us.