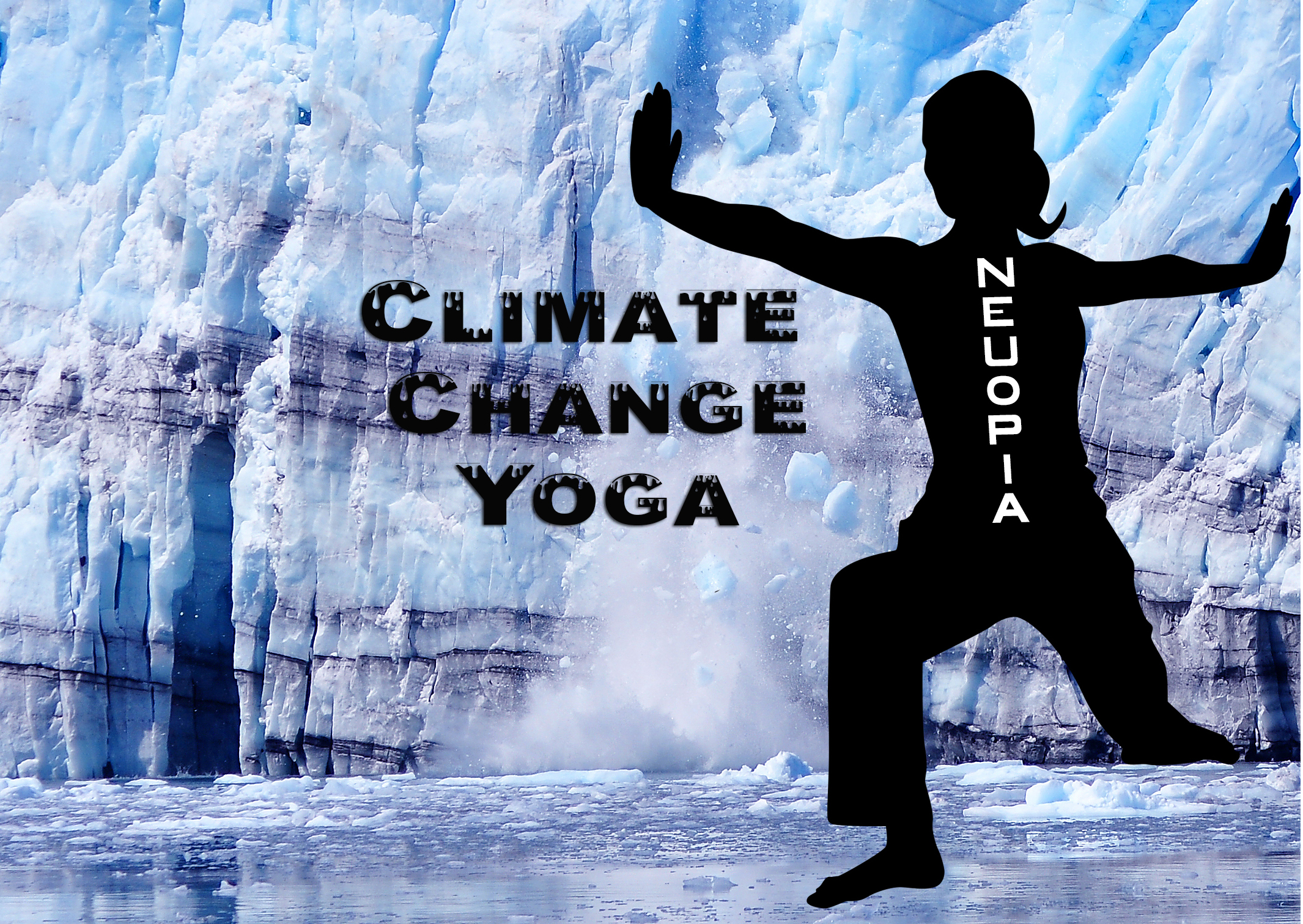 [To hear Doctress Netuopia read her poem, click the above link.]

Yoginis and Yogis time for a meditation

on breath and the global carbon cycle.
Get seated into easy pose—sukhasana.
Sit down on your sitz bones as you
straighten your spine while extending
the crown your head up into the smog.

Take a moment to relax.
Before you gasp for oxygen,
draw in a big breath.
Feel the planet’s anxiety
stressing out your lungs.

Exhale the pain, suffering, and violence
of centuries of humanity gone wrong.

Inhale: let your breath
sink deeper into the world’s shadow,
open the part of your brain that lives in denial.

Exhale: visualize yourself as a pedestrian
stuck on a traffic island during 5:00 rush hour.
You are trying to cross the street,
but there is no way you can cross to the
other side because the cars won’t stop for you.

Inhale: you have no choice
but to breathe in the fumes,
the greenhouse gases being discharged
from the tail pipes of the millions of cars.

Exhale: puff out the remaining poisons
as you transport your mind to the Arctic circle.
With the Arctic summers becoming ice-free,
and planet’s air conditioner is no longer working,
meandering jet streams cause cold spells and heat
waves as the west-to-east air currents weaken.
The Arctic is not at the periphery but is the core,
creating weather patterns around the cosmic orb.

Inhale: focus your mind on the ice sheet of Greenland.
Ice melting into water drains to the crevices.
In ten seconds, water flowing down to the base
where the ice joins the rock, lubricates the ice
which slides off into the dark sea: rising tides,
sinking islands, and causing millions of coastal refugees.
As the permafrost regions around Siberia and Alaska soften,
thermokarst landscapes erode
into bogs, pits, fissures, and caves.
Ground ice melts, forming into new Arctic lakes.
Sinkholes appear as the Earth burps methane gases,
self-reinforcing feedback loops, vicious circles,
of an unstable global warming crisis.

Exhale: take your mind to the top of the world,
to the Tibetan plateau where glaciers dissolve.
Less snow and smaller Himalayan glaciers means
less water for billions of people who depend on
the once-mighty Asian rivers now trickling to the sea.

Take a huge inhale: direct your consciousness to the
open ocean, where autotrophic phytoplankton consume
carbon dioxide and release half the oxygen that we breathe.
Phytophankton—the basis of the aquatic food chain,
eaten by krill, in turn devoured by megaton whales.
As the ice shelves retreat,
it’s loss of habitat for the critical algae.

Exhale: know that forty percent of these creatures have
declined in six decades due to decelerating ocean currents.
(Thermohaline Circulation, the great ocean conveyor belt,
is affected by an influx of fresh water rushing into
salt water sea, changing its salinity).

In-breath: dive into the underwater oasis of a coral reef.
Their calcium carbonate skeletons are biodiversity shelters
and island storm barriers, home to one-quart of all marine life.
Symbiosis between coral polyps and one-cell algae is
being destroyed by higher tides and shifting temperature.
Ancient partnerships bringing oxygen to the polyps
and carbon dioxide for photosynthesis
to algae—zooxanthellae–are dying.
With the colorful coral’s algae life-force gone,
the reef turns white, bleaching into the color of bone.

Out-breath: swim into the dead zone of the Gulf of Mexico.
The seabed is covered with oil pumped up from
the remains of plankton after millions of annums.
Failed attempts at “bioremediation” after the
explosion of the oil rig, Deepwater Horizon,
haven’t brought back to life the tiny
and essential amoeba, foraminifera.

In-breath: on the West Coast of North America,
join the pterapods who are struggling
to survive in the souring sea.
Trillions of pounds of carbon dioxide released yearly,
a quarter absorbed by the ocean, changing its chemistry.
The pH of marine water is now acidic and corrosive.
For the translucent sea butterflies,
it makes holes and grooves in their miniature shells,
the submerged wonder-world is becoming a jellyfish hell.

Inhale: follow a tsunami to a shoreline nuclear power reactor.
The aging power plant is cracking up, unleashing invisible,
deadly radioactivity into our biosphere.
Now allow your breath into every cell in your body, investigating
exactly where plutonium has lodged in your vital organs.

Exhale: travel in your mind to the tropical rainforest.
You are the smoke arising from the burning trees
being cleared to raise methane-farting cattle for beef.
Home to half the world’s species of plants, animals and
microorganisms that could still help us find cures for disease.
The lungs of the planet,
eons of evolution burst into flames.
Rainforests use to provide a fifth of the world’s
oxygen is turn to vast plumes of smoke in moments.
Now blow out the tragedy of all the plants
and animals that have gone extinct because
of the short-term greed of human folly.

In-breath: beam yourself to Appalachia.
You are the rich soil on top of mountains
blown up by dynamite for coal extraction.
Rivers and streams of the mountainsides
no longer flow, water black from coal.
You are the toxic fumes emitted
from the chimneys of coal-burning plants,
making children cough and die from asthma attacks.

Exhale: back on arid land,
temperature changes on the ocean surface
alter rain cycles, land becomes desert
and desert brings drought.
Intensive corporate agriculture and overgrazing
cause famine, as soil depleted of organic matter
and minerals dries up and blows across continents
in massive dust storms in the wind.

Inhale and hold your breath:
go back in time into the Earth’s geology,
252 million years ago to the “Great Dying.”
Permian extinction event–a sudden
burst of a clathrate gun from the Siberian Traps
could have triggered a runaway greenhouse effect,
nearly wipped out all marine species, and almost
three-quarts of terrestrial vertebrate species.
With this sobering knowledge,
will Gaia’s story repeat itself?

Exhale and take in another breath:
hover over the Tar Sands of Canada
Blockades, civil disobedience, activism,
stop the pipeline to America, halting
dirty oil and the culture of petroleum.

Breathe out our present fate.
We can no longer ignore the earth war.
Breathe in truth:
the only thing that will save us is our
collective action to stop the catastrophe,
adapting to a new planetary reality.
Breathe deeper in the truth:
it is your aware breath that counts,
critical for the future of humanity.

Exhale: allow the Beloved Community
to calm your spirit with faith that we can
develop a regenerative economy,
decentralize the food supply,
turn our inner power towards the sun.
Repurposing fast food parking lots into gardens
of organic slow foods of Earthly delights.

Inhale: from the people’s Climate Change March arises
the critical mass to direct evolutionary policy makers
into building ecological cities—arcologies—bringing us
into the fifth dimension we all long for in our hearts.
The space-time continuum, bound for the stars,
colonies of terrestrial bacteria terraform Mars.

Out-breath: arcologies like starships recycle wastes,
as wastes become nutrients for other living things.
Ecocities shield us from inhospitable
environments on Earth and in Outer Space.
Integral containers for a new humanity
mean reclaimed land returns to
wilderness for endangered species.

Now force the remaining air from your diaphragm.
Pause for breath retention.
Since the Industrial Revolution,
one in four CO2 molecules have been
put into the atmosphere by humans.
As Flood Wall Street protesters demand corporations
divest from fossil fuel, natural gas, and nuclear industries,
heirs of Rockefeller’s Standard Oil,
announce they will invest in a future of alternative energies.
They say it is good for business, as if free-market competition,
and profits can go on as business as usual.
Humans have never experienced a sea ice-free Arctic.
With jet streams and ocean currents disrupted,
how usual is this bizarre weather in North America and Europe?

Inhale: ask yourself,
should we allow these corporations, who have nearly
destroyed our atmosphere, to continue to lead our future?

Exhale: no!
Listen to me.
Put the remaining natural resources
into an Earth Bank of a united world’s people!
No more being fooled by the plutocratic families,
traveling to their elitist mansions on their Lear jets,
greenwashing the media with their public-relation lies.
It’s time to deactivate the mind viruses that cause ecocide!

Exhale: the people’s march was a social tipping point,
a threshold to a carbon-free, nuclear-free
solar-powered world, an epic-making event,
when the political climate morphs toward
global justice and will not backslide again.
Now, fully exhaust your last breath, expelling
any religious mythos that no longer serves
our biosphere with an anti-scientific mindset.

Inhale: our global enlightenment,
the collective breath of mass movement.

Exhale: surrender to the cosmic powers of yoga,
the sacred unions that bond us with the holy web of Gaia.