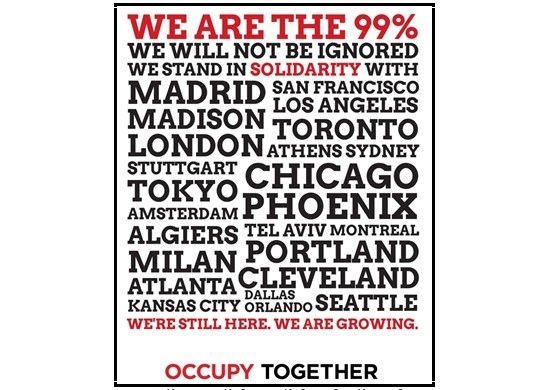 A news digest of recent activities of the Occupy movement

Occupy abolishes $4 million in other people’s student loan debt
(CNN — September 17) Marking the third anniversary of the Occupy Wall Street movement, the group’s Strike Debt initiative announced Wednesday it has abolished $3.8 million worth of private student loan debt since January. It said it has been buying the debts for pennies on the dollar from debt collectors, and then simply forgiving that money rather than trying to collect it. In total, the group spent a little more than $100,000 to purchase the $3.8 million in debt. While the group is unable to purchase the majority of the country’s $1.2 trillion in outstanding student loan debt because it is backed by the federal government, private student debt is fair game. This debt Occupy bought belonged to 2,700 people who had taken out private student loans to attend Everest College, which is run by Corinthian Colleges. Occupy zeroed in on Everest because Corinthian Colleges is one of the country’s largest for-profit education companies and has been in serious legal hot water lately…”
http://money.cnn.com/2014/09/17/pf/college/occupy-wall-street-student-loan-debt/index.html

Police move to clear Occupy Democracy protesters from London’s Parliament Square
(Guardian – Oct. 19) Between 50 and 100 Occupy Democracy protesters remain after police arrest one and evict others after three days in square. According to its website, the goal of the Occupy Democracy campaign is to “direct the energy from current single-issue struggles into a critical mass that can radically challenge the corrupt and unrepresentative system”.
http://www.theguardian.com/uk-news/2014/oct/19/occupy-protesters-parliament-square-london

Hong Kong’s ‘Umbrella Square’ one month on: how are protesters living?
(Guardian — Nov 2) Almost as soon as I arrived at the Hong Kong pro-democracy protesters’ main encampment earlier this month, a young man in a black T-shirt tapped me on the shoulder, smiled, and handed me a bottle of water. “If you’re thirsty,” he said, and walked away. Thus is daily life in Umbrella Square, a sprawl of hundreds of variegated tents beneath a forest of skyscrapers on Gloucester and Harcourt roads, two of the city’s most important thoroughfares. Since 28 September, when protesters used umbrellas to shield themselves from police volleys of tear gas and pepper spray, the swath of highway has evolved into a high-functioning utopian collective blocked off by a handful of elaborate barricades. Volunteers hand out donated biscuits, coffee toilet paper, face masks and bottled water from well-stocked supply stands along the thoroughfare…
http://www.theguardian.com/world/shortcuts/2014/nov/02/hong-kong-umbrella-square-wifi-bottled-water

Last of Hong Kong protesters arrested amid police clearance
(Guardian – December 11) The clearance of the main occupation zone in the Admiralty district closes a chapter for a movement that galvanised the region, drawing tens of thousands to the streets at its height. But even as police moved in on Thursday, the overall message was of peaceful defiance, with participants vowing “We will be back”, and pledging to develop new tactics…
http://www.theguardian.com/world/2014/dec/11/hong-kong-protesters-brace-arrests-police-clearance

Podemos (Spain), Syriza (Greece) and Left Unity (Germany) are working to show there is an alternative to embedded elites
(Guardian – October 13) After four years of grassroots resistance in Spain, through the 15m (indignados) and anti-eviction movements, new ways of doing politics are emerging. Podemos was born this January with the goal not of being just another political party, but of engaging in politics with its aim “to contest the mandates of the financial and political elites through new, radically democratic means”.
http://www.theguardian.com/profile/eduardo-maura

Poll lead for newcomer Podemos shakes up Spain’s political system
(Reuters – November 2) A party formed in January has become Spain’s main political force one year before national elections, an opinion poll showed, shaking up a two-party system that has dominated since the country’s return to democracy in the 1970s. Podemos (“We Can”) has ridden anti-establishment sentiment for months by fielding young candidates new to politics and tapping into the “Indignados” movement that occupied Spanish squares three years ago calling for a new political model. Its support has risen steadily in surveys, adding pressure on the ruling People’s Party and opposition Socialists as they battle Catalonia’s independence drive, corruption cases in their ranks and a depressed economy…
https://news.yahoo.com/spanish-newcomer-party-takes-lead-poll-shakes-political-153228671–business.html

Eminent Domain: A Long Shot Against Blight
(New York Times – January 12) You can’t fight city hall, the saying goes. But Gayle McLaughlin, the mayor of Richmond, Calif., a city of 100,000 souls, would tell you that fighting Wall Street is harder. Even for city hall. Ms. McLaughlin has a plan to help the many Richmond residents who owe more money on their houses than their houses are worth, but it’s one that banks like Wells Fargo, large asset managers like Pimco and BlackRock, real estate interests and even Fannie Mae and Freddie Mac, the mortgage finance giants, have tried to quash. Her idea involves a novel use of the power of eminent domain to bail out homeowners by buying up and then forgiving mortgage debt.
http://www.nytimes.com/2014/01/12/business/in-richmond-california-a-long-shot-against-blight.html?_r=0

Voters Reject Oil Titan Chevron, Elect Progressive Bloc in Richmond, California
(Common Dreams – November 5) Tom Butt is elected mayor and a slate of progressive candidates, including current mayor Gayle McLaughlin, all win city council seats after a grim battle with corporate power in which Chevron alone, the owner of a refinery located in the city that is currently subject to a lawsuit brought by the city, spent 3 million dollars in an attempt to unseat the progressive/green alliance that had swept into power four years ago.
http://www.commondreams.org/news/2014/11/05/voters-reject-oil-titan-chevron-elect-progressive-bloc-richmond-california

Analysis: Where are the Occupy protesters now?
(The Guardian, June 17, 2014) – “Where have all the chanters gone; the gospel-minded Christians and the denouncers of ‘banksters’ and tyrants; the homeless and the indebted and unemployed who filled our urban squares in 2011-12, crying out such slogans as “We are the 99 percent” and “The people want the end of the regime”? Where are the leaderless revolutionaries who turned cities around the world upside down? The simple answer is: they were dispersed. When the sometimes public parks were swept clear of troublemakers, many dispersed into a scatter of left-wing campaigns. Other activists now escort visitors around bare, fenced-off Zuccotti Park near Wall Street. In London, free bus tours with guides in top hats carry the curious around the City and Canary Wharf (“Make your very own ‘credit default swap’ and find out how to create money out of thin air!”)…”
http://www.theguardian.com/cities/2014/jun/17/where-occupy-protesters-now-social-media