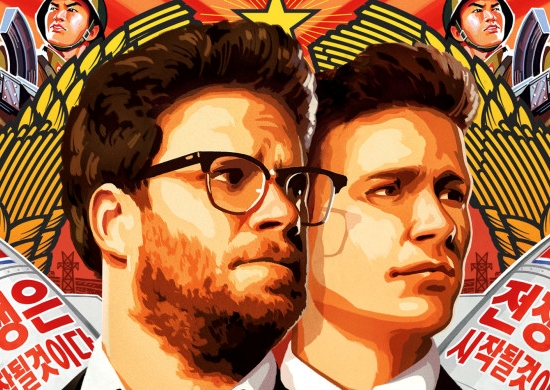 Dangerous propaganda – that would be the sort where imperialists succeed in convincing people that foreign meddling is going to be fun.

Full disclosure – I probably would not have gone to see this film had it not been for the repeated coverage over the past three weeks, of dozens of implausible & conflicting rumors regarding the government of North Korea having putatively hacked into the computer system of Sony Pictures, – the studio where this film was produced. Add to this reports that some in the government of North Korea apparently regard the production of this film as an act of aggression, amounting to a declaration of war by the United States against North Korea – and I was, as they say in the film, honeypotted. I had to go and see it.

Honeypotting – that’s when you hoodwink your opponent by being nice to him. It happens at least four times in this amusing storyline. There are also the usual doses of vulgar language and double-edged banter, delivered in nearly manic sequences. This reviewer finds them suspect. Yes I get it, about how we “Americans” are supposed to be there in the audience congratulating ourselves on how acting stupidly and frivolously is really ok, and it’s really all good. People sympathetic to continuing imperialism often invoke the vulgar language and the disrespect with the apparent intent of proving that they’re safe, and proving that they are really not immoral or mentally deranged, – but maybe somebody else is immoral and deranged, right ?

The banter and frivolity which is portrayed as being the custom of our hip and liberated heroes while here in the United States [a name which to me implies other countries exist on both of the American continents, or am I supposed to say “America,” implying that no other nations or states could possibly exist?] are presented in stark contrast to the way of things in North Korea. There everyone is serious, and military-focused, and the buildings [when there are any buildings at all] are immense and bleak, with a few spots of fake prosperity, carefully arranged for propaganda.

The two reporters who are at the center of the storyline are fond of literary references, – well maybe only one literary reference. They cannot stop talking about “The Lord of the Rings”. Convenient, that, since North Korea is portrayed as looking like a slightly modernized version of Mr. Tolkien’s fictional Land of Mordor, all dead land and blighted people and enormously oversized empty buildings. And while we’re at it, is it really any accident that a new Tolkien film was released for the Christmas holidays?

Our heroes arrive in North Korea, and at first it seems there may have been a horrible mistake. Here, arrayed before us, is a fully rational Kim Jong-Un, an urbane and witty Kim Jong-Un, a sensitive and vulnerable Kim Jong-Un. Such a transformation would seem impossible, – but in this film, oh that wily evil Kim Jong-Un, he has actually accomplished it. During much of the second half of the film, the audience is dizzily wondering which side has been more effective at honeypotting the other.

A film of this sort can be great fun and relatively harmless. It can express disapproval of foreign military dictators who maintain systems which starve their people, and it can express heartfelt sympathy with the brave souls who live there who stand ready to remove such dictators. This film does both of those things. But unfortunately it does not stop there. The directors and producers of this film have located it not in a fictional country [such as the “Parador” of the short novel “The Ugly American”], but instead they have actually named North Korea. The directors and producers of this film have lampooned not some fictional incompetent and/or murderous dictator, but instead they have actually named a presently sitting dictator, Kim Jong-Un. To this reviewer, these choices seem not especially smart. For one thing, some North Koreans seem to be angered by this portrayal. Is anyone surprised? If yes, then why? And what is gained by having angered them? For another thing, if the film’s central message is to be disapproval of murderous dictators and encouragement for those who would remove them, – that message is diluted by being limited to one country and one dictator.

2 thoughts on “The Interview: A Review”