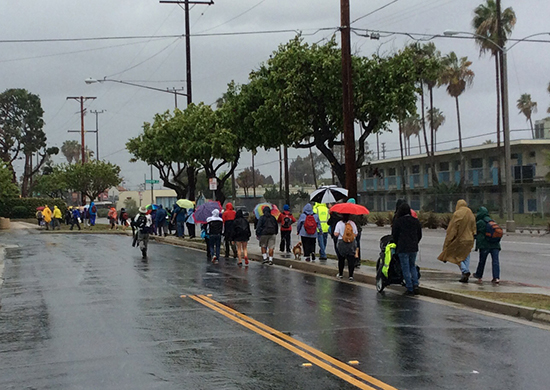 Sure, people walk their dogs and they care about the environment. But few pack up their pooch and head off for a 7-month, 2,400+ mile trek across the country to raise awareness and to encourage action on climate change.

I’m Mary DeCamp, local Occupy Tucson activist and 2011 Green Party mayoral candidate.  I also ran for a 2009 Ward 3 City Council seat, so let’s just say I’m not afraid of a big challenge.  My platforms were climate change, peak oil, and crashing economies. I’m deeply concerned about human and planetary health, and I’m willing to do what little I can to challenge the status quo.

I  joined the Great March for Climate Action (GMCA) when it passed through Phoenix, AZ on April 6th.  I gave my car to the local community-owned radio station, KXCI (91.3 fm), and hitched a ride from Tucson to Phoenix with Reverend Michael Dowd and his wife Connie Barlowe who tour the country speaking about the marriage of climate science and Christianity (The Future Is Calling Us to Greatness).

The Climate March walked 15 miles a day, on average, on our journey across the United States.  The path took us through eleven states and the District of Columbia before we reached our destination at the White House on November 1st.  Along the way, we met many of local activists who shared their concerns with environmental degradation and their experiences with intensifying weather and/or corporate challenges.  We promised to take their stories to Washington, DC and to publicize their plight as best we can.
The Climate March started in California, amid a torrential downpour.  Though the number and the faces of walkers varied along the way, usually around 40 walkers trudged together through the Mojave Desert, up and down the continental divide, through the proposed Keystone XL pipeline route, alongside feedlots and slaughterhouses, past endless monoculture fields of corn or soybeans, into Bakken pipeline territory, over the Marcellus Shale Field, next to railroads and rivers and lakes.

In Taos, NM, a locally elected official noted in his culture it was said pilgrims bring rain.  Since it was raining at the time, Climate Marchers were credited for breaking the Taos drought.  (Wouldn’t it be sweet if we really had that kind of power?) People in the communities all along the route expressed gratitude, opening their hearts and homes to support the Marchers.  Many nights were spent in tents, but churches, community halls, schools, businesses, and families welcomed walkers as well.  One night was spent in a detention center; another night at a retirement home for nuns.

Food was another important facet.  Walkers must be fed if they’re to keep up their strength day after day.  GMCA had a kitchen truck.  It was a converted moving van, outfitted with shelves, to carry our food, campstoves, cookware, a regular-sized refrigerator, four 75-gallon water tanks, dishes, spices, and all things culinary.  I worked my way into the scullery maid position, so it fell to me to keep the truck clean, sanitized, stocked with food and water, and gassed up.  Birdie liked this arrangement because she hung out underneath the vehicle where she was safe, cool/warm, and could keep an eye on me.

Another task was keeping the refrigerator charged.   We used a solar generator to catch the sun’s energy and fuel the ‘fridge, the computers and phones, and a couple of the fellows’ electric razors.  Each day we’d pull into a new campsite, and one of the first chores was to position the solar panels and plug the refrigerator in.  Then attention shifted to setting up the kitchen and arranging camp to greet the weary walkers when they arrived.  Birdie’s attention was on the new sights and smells and feel of each new encampment.
And just as food is a consideration on a March, so is poop.  Ugh.  Sorry to get so personal, but we all do it, so we had to deal with it.  And our approach was pretty ingenious.  A waterless, chemical-free eco-commode with four stalls was pulled behind a truck.  Solids and liquids were kept separate (so ladies learned to use a urinal, too, or used a catch cup) so urine could be stored in an airtight tank and the solids could be covered with sawdust.  I can’t tell you how much water this system saved.  It made me realize how much potable water gets flushed down the sewers by all of us.

Birdie’s poop?  I made sure I picked it up and disposed of it properly as well.  (All dog owners do that, don’t they?)  Birdie’s presence on the Climate March was provisional – she had to be under control at all times.  All her health and registration records had to be up to date and on file.  A few times she got to roam free, like when we were on farms and the owners approved of free range dogs, but most of the time she was leashed.

The Climate March was a small rolling village.  There was a mayor, a city council, and a judicial council to govern the citizens of our community.  Miriam Kashia, a 71-year-old grandmother who walked every step of the way, was our three-term Mayor.  We used instant-runoff-voting to decide.  Everyone rank ordered their choices for offices with 1’s, 2’s, 3’s, and so on to indicate most favored to least favored candidates.  That’s another good idea from the Climate March that could be more widely adopted. Birdie didn’t get to vote, but she did end up running for office.  As the GMCA progressed, two of the Marchers were added to the Board of Directors.  The Board started out with three members, the minimum state law allows, but grew to five by the end.  Birdie and I ran as a team for one of the seats and we got the most votes.

I’m grateful for the opportunity to be part of this life-changing experience.  I’m especially thankful for the many supporters who helped me raise the $20/day cover charge for the March.  I’m fit enough to walk, and free enough to go, but I could not afford to foot the bill (pardon the pedestrian pun) without the help of friends and family.  And I know Birdie appreciates the support, too!

The lessons I take from the Climate March are pretty simple.  Our industrialized lifestyles have shifted weather patterns in ways we’ve never seen before, and we’ve not yet seen the huge changes that are in store.  There’s enough “stuff” in the world; the distribution of “stuff” is way off kilter.  The best contribution I can make is to live as simply as possible and love as much as possible.  Birdie says Woof!

2 thoughts on “TESTIMONIAL: A Journey on the Great March for Climate Action”