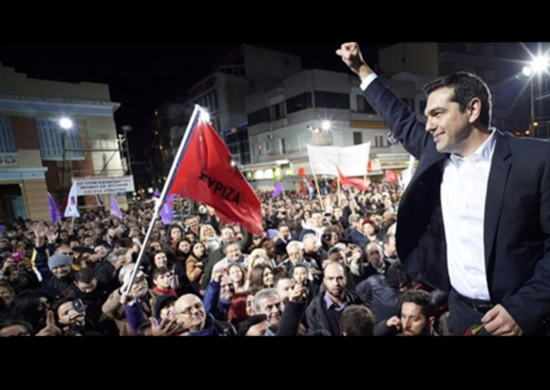 The resounding electoral victory of the Radical Coalition of the Left (SYRIZA) in Greece on January 25th may mark the beginning of important changes in Europe. SYRIZA has won 36.3% of the vote and 149 seats in the 300-member Parliament, defeating the right-wing New Democracy Party of incumbent Prime Minister Antonis Samaras. SYRIZA quickly formed a coalition with the right-wing populist and anti-austerity Independent Greeks Party, which won 4.7% of the vote and 13 seats.

The new Prime Minister will be SYRIZA’s 40-year-old leader, Alexis Tsipras. Tsipras is a civil engineer with advanced studies in urban and regional planning. He defeated the sitting Prime Minister, Antonis Samaras, of the center-right New Democracy Party, who won 27.8% of the vote and 77 seats in the Parliament. In the 2012 election, Samaras led the polls with only 18.9% of the vote and 108 seats. He had formed a coalition based on acceptance of the EU austerity program and assumed office with the support of the European banks, which provided a 130 billion Euro ($165 billion) bailout to alleviate Greece’s public debt of 307 billion Euros ($390 billion)—a debt 157% the size of Greece’s GDP that year. A troika of the European Central Bank, the International Monetary Fund, and the European Commission guaranteed the bailout credits.

SYRIZA campaigned against the austerity packages agreed to by the preceding government, which reduced public expenditures by 18.8 billion Euros over four years, front-loaded for 2013 with a 9.3 billion Euro cut. They also eliminated 15,000 public sector jobs, increased the retirement age from 65 to 67, cut public sector salaries between 15% and 30%, pensions by 20%, and the minimum wage, which had been 751 Euros/month by 22%.  The Value Added Tax was increased from 17% to 23%. Anti-corruption measures were adopted and a campaign to prevent tax evasion introduced, but they were never effectively enforced.

Clearly, that strategy did not work. Greece’s unemployment rate, which was 7.8% in 2008, and had risen to 23.1% at the time of the bailout, was 25.8% in October 2014, higher than the U. S. unemployment rate at the peak of the Great Depression.  And the Greek youth unemployment rate has reached 50.6%.  Many young Greeks have fled to other European countries looking for work, and that situation has diminished the tax base and increased public debt beyond official projections. It now stands at 317 billion Euros, according to a January 25th Financial Times report; that is 175% of Greece’s GDP.

SYRIZA, and Tsipras, came to prominence during the 2008 Greek anti-austerity riots of 2008, in which they were leading protagonists. SYRIZA had led the vote in Greece in the May 25, 2014 European parliamentary elections with 26.6 percent, winning six seats, one of which was occupied by Tsipras.

The SYRIZA program for the new government calls for:

The size of its victory strengthens SYRIZA’s hand in negotiations with the Eurozone authorities. SYRIZA leaders have expressed their interpretation that Greece cannot be forced out of the Euro currency, and they will not withdraw unilaterally. They seek to call Europe’s bluff and retain the Euro currency under substantially more favorable terms.

Even so, once the election results were known, the German Finance Minister, Wolfgang Schaeuble, ruled out debt relief for Greece, and IMF Chief Christine Legarde demanded that Greece respect IMF rules and declared that there could be no special treatment for any one country. European leaders, especially German Chancellor Angela Merkel, have refused to soften their terms, fearing that other debtor countries will follows suit and provoke the economic collapse of Europe and the Euro. The irony of the German position is that in 1953 much of the 18 billion mark German debt dating back to World War I was written off under an agreement with its Western creditors.

The new Greek government will challenge that position and force the European leaders to revisit and modify their stance, forcing them to consider seriously the risk to European economic stability that could arise from isolating Greece from the Eurozone and possibly also the European Union, and the possibility that other European nations with weak economies could soon join them.  Whether the European member states, including Germany, can modify their hardline positions and accept some of SYRIZA’s demands should play out in the next weeks or months. It will not be easy. The pitfalls are many and the path to success for Greece narrow.

SYRIZA’s victory in the Greek elections may have repercussions elsewhere in Europe.  In Spain, a new general election must be held on or before December 20, 2015. Spain’s elections in the decades following the death of Francisco Franco have been largely two-party affairs between the right-wing Popular Party (PP), now in power with Prime Minister Mariano Rajoy and the center-left Spanish Socialist Worker Party (PSOE) now led by Pedro Sánchez.

Since November 2014, public opinion polls have shown a new political party,  PODEMOS (WE CAN in English), to be leading the ruling PP, with PSOE in an increasingly distant third place, and the smaller parties, including the United Left and the regional Basque and Catalonian parties, even farther behind.

PODEMOS sprang into prominence with the May 15, 2011, protest movement of the indignados, in massive demonstrations that preceded and, in part, inspired the Occupy Wall Street movement in New York and its sister organizations, including Occupy Tucson, formed on October 15, 2011, of which the Occupied Tucson Citizen is a working group. In the 2014 European Parliamentary elections PODEMOS obtained only 8% the vote and five of Spain’s 52 seats.  Since then, successive corruption scandals have weakened the PP Government’s position.

PODEMOS’s leader—Secretary General, now that PODEMOS is an official political party—and Presidential candidate is Pablo Iglesias Turrión, one of their members of the European Parliament. Iglesias is a 36-year-old lawyer with a PhD in political science  who teaches at Madrid’s Complutense University. Actually, Pablo Iglesias is one of the older leaders of PODEMOS, most of whom are 30 years old or younger.  PODEMOS’s appeal is definitely widespread among Spanish youth.

Among PODEMOS’s campaign proposals are:

One factor in the appeal of both Tsipras and Iglesias is personal image. Both men are telegenic and charismatic. Tsipras, a dapper, thin man, wears fashionable dark suits and projects elegant modernity. Iglesias dresses informally. He wears a long black pony tail, an earring, and piercings, and he has rock star appeal with the younger generation.

Should PODEMOS win the 2015 Spanish General elections and Pablo Iglesias become Prime Minister, the impact of that experience could spread across Europe and even affect elections in the United States.  Young people in the United States are turned off by the leaders of both major parties, whom they perceive as out of touch with today’s reality, and in particular the younger generation.  The reform movement within the Democratic Party, such as it is, is mainly focused on getting Senator Elizabeth Warren to run for the nomination, and mobilize youth that would likely not support Hillary Clinton.

But, if the recent experiences in Europe are any indication, any transformative movement in the United States must come from outside the two principal political parties.  If the European Spring fever spreads, we can at least hope for a stronger, more sustainable revival of the spirit of the 2011 Occupy Wall Street movement. If that occurs, it could inspire and help mobilize youth and others who typically do not participate in elections and who are increasingly unhappy with domination by the 1 percent of the rest of us. If their protests are strong enough, they could apply enormous pressure on the candidates ultimately elected in the US 2016 elections to move in a more progressive direction and eventually attain peoples’ power themselves.

Whether or not that happens will depend largely on how well Tsipras in Greece and possibly Iglesias in Spain can manage their respective crises.  For now all eyes are on Greece, where the odds against Tsipras’s success are daunting.  If he and his Government can convince the other European leaders and the European banks to modify their stances and reach an acceptable agreement with them for Greece, he will have made history.

In the short term, the most likely outcome is a Greek default on its debt, a route Paul Krugman, in the New York Times, considers the best option available to Greece.  If Greece defaults, it will be denied access to international credit, as Argentina was a decade ago, but Argentina weathered that storm and its economy has revived.  And it will be the European banks and the Euro that will suffer most. Moreover, Germany exports 50% of its GDP and cannot afford to lose its free trade options within the Eurozone.

Can European leaders and banks change their thinking and approach?  That remains to be seen, and there will be myriad obstacles to that change. For now, the path of austerity, not just for Greece, but also for Spain, Portugal, Italy, and even France, is no longer viable.  The outcome of this struggle will no doubt impact economies and politics all over the world for decades to come.