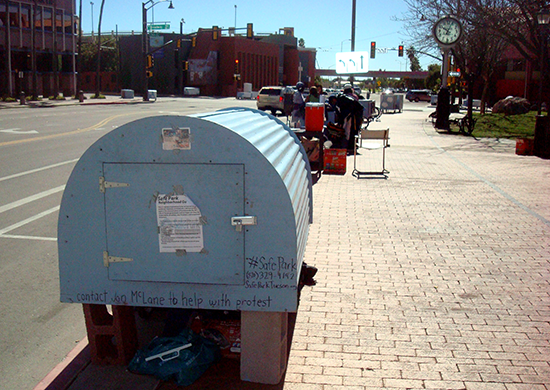 In a confused approach toward the homeless, Arizona Daily Star columnist Tim Steller’s recent articles capture some of our collective cultural ambivalence. On the one hand, Steller has tried to wake people up about our society’s neglect of the homeless. Last November, he wrote of his unease when voting for a proposition that would raise $22 million for a new animal shelter: “Why are we willing to spend so much to build a new complex for homeless dogs and cats when there are plenty of homeless people around Tucson?” On the other hand, in a more recent article, Steller implies that an experimental homeless encampment and protest site named “Safe Park” (located downtown in Veinte de Agosto Park) should be dismantled.

Steller complains about a decision last December 19 by District Judge David Bury that prohibits the City of Tucson from “closing any area of the sidewalk […] without posting it as closed to all citizens.” The problem, as Steller sees it, is that while activists John Cooper and Jon McLane of Occupy Public Land claim Safe Park has something to do with a “free speech zone”, really “[w]hat the site amounts to, for most people staying there, is a secure spot to spend the night.”

But I wonder: what does a homeless protest look like?

If homeless persons are in a situation where their very existence is illegal, as Cooper argues in an article for the Occupied Tucson Citizen, what would their fighting back look like? Would they rent out a hotel lobby to raise money? Would they organize a car wash? A bake sale? Or would it be okay to protest at Veinte de Agosto from 8 – 5 so long as afterward they hurry back to some wash or shelter bed, or somewhere unseen?

“Communities are using the criminal law to cleanse their streets of homeless survivors,” as Cooper puts it. The reality is that the homeless are under assault in this country and in this city. Again, Cooper:

“Since 1996, the City of Tucson has embarked upon an all-out assault on the homeless individual. The City has enacted a laundry list of anti-homeless laws such as: closure of public places the homeless frequently visit; construction of statutes prohibiting obstruction of sidewalks/public places to bar the carry or temporary storage of personal property; strict enforcement against loitering/loafing in public places; denying individuals the right to sit or lay down on sidewalks or in other public places; denying individuals the right to sleep in public places; strict enforcement of City park curfews against individuals who patently appear homeless; prohibiting panhandling or begging in public areas where such activity is most lucrative; and making basic human functions such as bathing, urinating and defecating in public a criminal offense while utterly failing to provide a public means for individuals without homes to comply with the law. These actions have created hardship and inequity by forcing the homeless out of the city center—the very place where services for these people are located.”

Tim Steller suggests that a woman living in the Santa Cruz river bottom is more representative of the homeless—and thus her complaint against the sleeping pods at Safe Park is given weight.

“Box houses on sidewalks? Really? Moves like this is why regular society doesn’t like or want 2 help homeless people,” she texts Steller. Is that it? Was “regular society” on the brink of allocating the resources to put homeless people into a stable housing situation? On the brink, that is, until the likes of McLane and Cooper came along with their “audacious” protest and ruined the good intentions of “regular society”. To pose the question is to reveal its absurdity.

Darren DaRonco—also from the Arizona Daily Star—seems to think it’s a matter of choosing whether or not to use a shelter. But it’s not that simple. There aren’t enough shelter beds for all the homeless in Tucson. There are also restrictions that exclude some persons from shelters (having a pet, not having identification). And yes, indeed, there are reasons a person may choose to sleep on the streets than have to deal with a shelter. A shelter also doesn’t help during the hours of the day when they’re closed.

The pods at Safe Park are obviously not a solution, but neither are traditional shelters. And meanwhile, the existence of homelessness in Tucson is more expensive than providing desirable housing; but we don’t house the homeless because of widespread contempt and neglect. The status quo of criminalizing homelessness is unacceptable, and protesting that status quo is legitimate and desirable. McLane’s desire to be called a “civil rights leader” may be self-promotional—or quirky—but make no mistake: civil rights are at the core of the struggle to decriminalize homelessness. Indeed, audaciousness is required to wake people up.

2 thoughts on “What Does a Homeless Protest Look Like?”