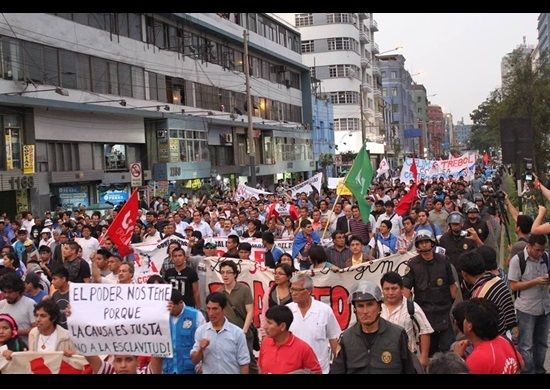 LIMA, Peru—In a major victory for young workers, on January 26, 2015, the Peruvian Congress repealed its own Youth Labor Regime, Law No. 30288, best known locally as the “Ley Pulpín” or “Squid Law” in English, a reference to the stranglehold many-armed corporations have on labor and particularly young labor.

This Law, which went into effect on December 16, 2014, denied long established labor rights to workers between the ages of 18 and 24, including:

It had been introduced by the Minister of Economy and Finance and passed by the Peruvian Congress on December 16 with little debate. Its sponsors, including the Lima Chamber of Congress, the Confederation of Private Business Institutions, the Exporters Association, and the International Monetary Fund, claimed it would reduce labor costs and youth unemployment. It also provided employers with tax credits for training young workers, something they normally did anyway without tax credits.

The protests began on December 18th and continued nationwide until the Law was repealed. They began by mobilizing 5-10 thousand youth in Lima with no party affiliation or organizational commitment and probably three time that many youths in the provinces. By the time of the fourth demonstration on January 15th, the demonstrations probably approached 100,000 nationwide, having brought in the support of unions, left political parties, NGOs, and independent citizens who were not part of the initial effort. Thus, a spontaneous youth movement ultimately galvanized the most important progressive forces in the country and turned an anti-labor national policy around.

Most Peruvians were indifferent at first or did not understand the implications of the Law, but by the final week prior to its repeal public opinion polls had shown that 76% of the Peruvian population opposed the Law. It was passed initially by a 62 to 12 vote, with support from the Gana Peru (Peru Wins, in English) Party of President Ollanta Humala and the larger opposition parties; the votes against it came from the smaller, more progressive opposition parties. Repeal was supported by 88 members of the Congress and opposed by 18, all but one of which were from Gana Peru.