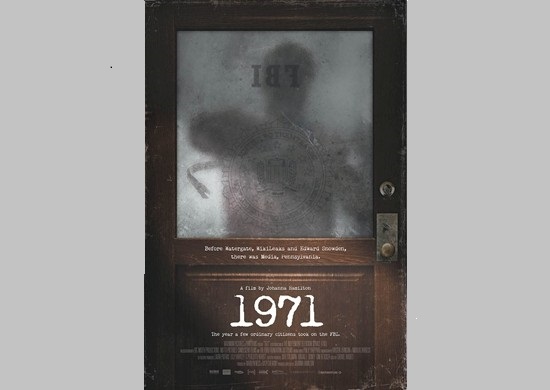 The precursor to whistle-blowing on the government’s surveillance of its citizens was the 1971 burglary of an FBI outpost in the sleepy town of Media, Pennsylvania. Information leaked to the national press detailed spying operations on anti-war dissidents. While this news dominated headlines in print and on television, an unprecedented search for the burglars was launched by an obviously infuriated J. Edgar Hoover. They were never caught.

1971, the documentary about this intriguing event, played to a one-third-full house in its one-time-only slot at the Loft Theater in Tucson last Thursday.

Activists against the war in Vietnam were convinced FBI agents were infiltrating their peaceful demonstrations, but they had no proof. Nine protestors in Pennsylvania formed what they called “The Citizens Committee to Investigate the FBI.” They devised a plan to burglarize the nondescript FBI office in nearby Media. Their lives were permanently altered by the secrets they uncovered and the one each hid over the next four decades.

The caper documentary 1971 is based on the book, The Burglary, by Betty Medsger, then  reporter for The Washington Post, who received many of the leaked documents. Forty years later, Medsger convinced the burglars to finally tell their story. The failing health of the leader of the group, William Davidon, a professor of physics at Haverford College, helped bring about consensus in the group that it was time to go public. Davidon died late last year. Medsger was also a producer of the documentary, as was Laura Poitras of the Academy Award-winning “Citizen Four” documentary which followed the fallout of Edward Snowden’s NSA leaks.

The film balances the prankster attitudes of those involved in the heist with their understanding of the serious personal danger they faced if caught. Reenactments are used to good effect in the film. Just before the plan’s execution date, one person dropped out, threatening the whole operation. Two of the committee’s members agreed to the recent disclosure, but remain anonymous. Burglar Number 8 is Judi Feingold, presumed dead by the others because she could not be located. She is not mentioned in the hard cover book or the film because she was still in hiding 43 years later, the last of those years spent—where else?—in Baja, Arizona. That The Burglary and her role packing and carrying one of the suitcases out of the FBI office had gone public was shocking news to her. She was on the Loft stage at the end of the film to answer questions.

If it sounds like a long, strange tale of American hippy-istory, it is. We find satisfaction in these “peace and love”-rs making keystone cops out of J. Edgar Hoover’s FBI minions. Hoover was 20 years into his reign by 1971 and the Rosenbergs were long dead. The Pennsylvania activists’ commitment at that time to what they knew was a just cause, and the importance of the revelations that schooled America about its FBI-at-work, are presented in a clear, engaging format. Their deed was an act of foolhardy courage and one unimaginable now due to the extent of present-day surveillance.

No information is available about when, where, or if 1971 will play again locally, but if it does, see it. Netflix subscribers can queue the documentary until release. The paperback of The Burglary just came out, revised to include Burglar Number 8, Judi Feingold, and can be found at Antigone’s bookstore on Fourth Avenue.