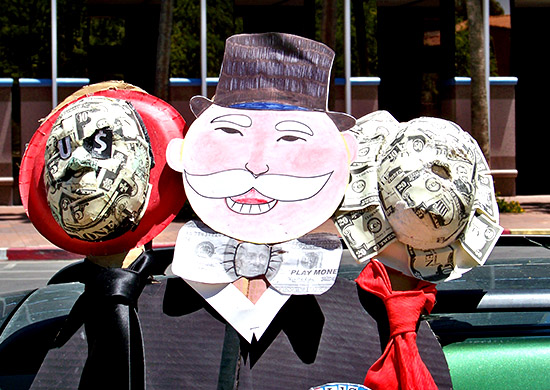 [By Patti Walters, with Photos and Intro by Alice Whittenburg]

In 1886, in Santa Clara County vs. the Southern Pacific Railroad, the Supreme Court of the United States (SCOTUS) ruled that corporations have rights and responsibilities just as human beings do, and in this way gave birth to the Corporate “Person.” On Mother’s Day (May 10) members of Move to Amend, Occupy Tucson Players, and a group of their supporters held a 129th birthday celebration for the Corporate Person in Veinte de Agosto Park, where they also honored SCOTUS as Mother of the Year.

The atmosphere was fun and carnivalesque, as about forty people played games, ate cupcakes, and reminded passersby that the Corporate Person is still alive and doing harm to our democracy. Mary DeCamp sought her groom, Ray Theon. Lena Rothman and Gaye Adams brought stand-ins for the Corporate Person for attendees to pose with. Margo Newhouse brought an artfully iced cake topped with toy soldiers, as a reminder of who serves the Corporate Person. Games included a water balloon toss to simulate the breaking of SCOTUS’ water before the birth of the Corporate Person, and “SCOTUS May I?” in which SCOTUS stand-in Mary DeCamp gave special treatment to corporate players. Members of Tucson’s Raging Grannies led the group in singing “Ode to Corporate Motherhood” (to the tune of the maudlin classic “M-O-T-H-E-R (a Word that Means the World to Me)”) and “The Personhood Song.”

Below you can read about what the concept of Corporate Personhood means to our political life and why the group Move to Amend was formed, and then you can see some photos of the Corporate Person birthday party.

Move to Amend
by Patti Walters

For more than 100 years corporations have been, incrementally, influencing the courts to pass laws that give them the right to spend unlimited amounts of money to influence our elections, that give them the rights of people and declare that money is speech. The two most recent laws are:
Citizens United v. Federal Election Commission — January 21, 2010
McCutcheon v. Federal Elections Commission — May 5, 2014

This illegitimate doctrine of Corporate Personhood has overturned many laws that attempt to protect our elections, safety and health, environment and right to organize. The Court has, in effect, legalized corporate bribery.

According to opensecrets.org, $6,285,557,223 was spent in the 2012 election. Undemocratic laws, such as Citizens United and McCutcheon, shut you and me out of the democratic process.

Our legislators are listening to fewer than 1% of the people. The other roughly 99% aren’t influencing our government in any consequential way. These devastating laws have hollowed out the middle class. That leaves all too many people struggling just to get their basic needs met. This must change.

The Constitution intended for laws to be determined by Congress (representing the people) and by we the people, through the electoral process. Thus, the people should determine what privileges are to be given to corporations — not individuals in black robes sitting on the bench.

MOVE TO AMEND (MTA) is currently a coalition of hundreds of organizations, and was the first organization to call for an amendment to the US Constitution after the Citizens United Ruling. Today, MTA’s proposed amendment (House Joint Resolution 29 introduced Feb. 14, 2013) remains the only proposed amendment that specifically addresses ALL FACETS OF THE ISSUE WITHOUT ANY LOOPHOLES:

1) “Corporate Personhood”… It abolishes any claim by corporations to Constitutional Right.
2) “Money as Free Speech”…It abolishes any claim that money is free speech.
3) “Campaign Spending”… It specifically states that Federal, State, and local government shall regulate, limit, or prohibit Campaign contributions and expenditures.

While there are now many proposals to enact a 28th amendment to the Constitution, none of them (including the Senate bill 19 that is currently being discussed and voted on) actually addresses all 3 facets of the issue. Only the MTA proposed amendment does that. Everyone is urged to sign the MTA petition calling for passage of HJR 29 available at the website http://movetoamend.org.

Move To Amend, Tucson, is seeking volunteers to help in this process. Local meetings are held as follows:

People are needed to hand out brochures at local events, at other venues, and to gather petition signatures.

All are urged to join this grassroots movement. Laws should reflect equal rights and opportunities for all of us — not just a few.