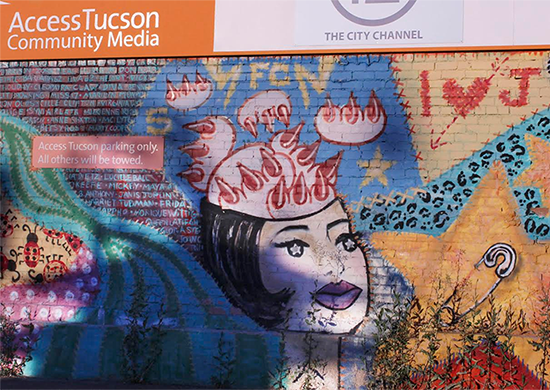 Last Saturday evening Access Tucson opened its doors to the public for the last time. The occasion was the bye-­bye bash for a community-­dedicated facility and concept that was the main concession Tucson received for its generous donation of city infrastructure to Cox Cable domination.

Today, much of Tucson’s only access to internet is through Cox due to that deal the city struck in the early 90s.

Monies earmarked from cable fees to run the community oriented TV channel are still being collected and will now go to the city’s general fund, a questionable re­direction of the original intent of the agreement with Cox.

Over about three decades, Access Tucson gave voice and image to Tucson great and plenty of Tucson weird. At no charge, anyone could take video production classes, check out professional level camera and audio equipment, use production bays, and create their version of news and entertainment for the Access Tucson cable channel.

Now the city will reclaim use of the Broadway real estate that housed Access Tucson and is currently still home to Channel 12, the media outlet for the City of Tucson. That property has increased greatly in value due to its prominent place on the new streetcar route. There is no word yet as to the future use of the property.

There are feeble sounds around Access Tucson reincarnating in some altered form, but the details are sketchy and projected onto an uncertain future for Tucson ever having the option for a centralized media outlet for its genius and madness.

One attendee at the going away party said he hosted an Access show for 14 years. “That’s a lot of experience,” which he said he was very grateful to have gained. What will he do now? “A television show. One door closes and another opens,” he said with a shrug.