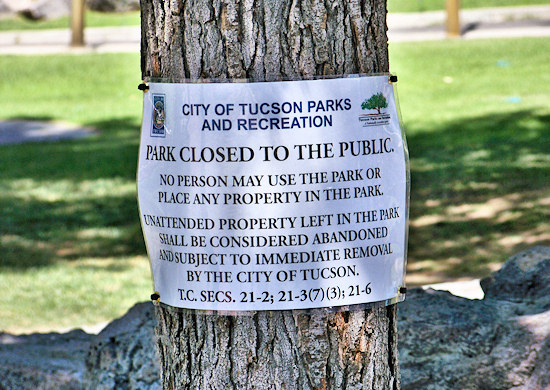 Yes, the park is closed, sealed and sanitized, but they can’t close the sidewalks.

City officials might think that closing Veinte de Agosto Park to human beings has rid them of the problem of homeless people in downtown Tucson, but they need only look at the continued presence of protesting homeless and just plain homeless on the sidewalks each night. The homeless were never sleeping in the park. They were sleeping on the sidewalks around it, to which they have, according to a recent court injunction, the constitutional right. And sleep there they continue to do — by one report some fifty homeless slept there on Monday night, the day after the park closure fully went into effect.

What the city then has in effect done is to simply harass the homeless who were and will continue to sleep there, but who can no longer use the park during the day for shade and rest. And, just to ramp up the harassment a bit more, the homeless are not, according to Michelle Lewis, an activist involved with the protest, allowed onto the sidewalk to sleep until 10 p.m., and have to leave by 7 a.m.

And yet they still come to sleep there.

The problem continues. So does the struggle. Stay tuned.

1 thought on “Harassing the Homeless”