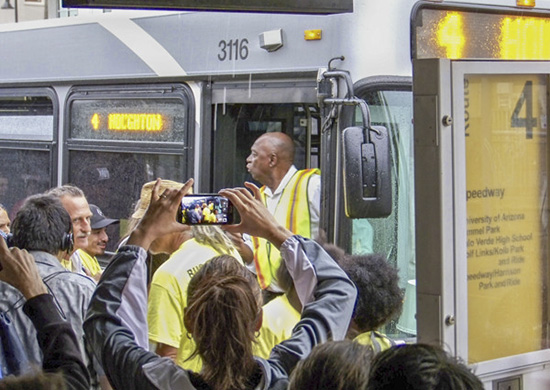 In a direct action held last Thursday at the Ronstadt Transit Center, members of the Tucson Bus Riders Union boarded a bus without paying their fares as a part of a campaign to pressure the city to take action to end the bus strike. Events transpired as follows (a fuller description of the events and issues surrounding the bus strike follows the photo essay):

POSTSCRIPT: The bus then drove off with its non-fare paying passengers. No arrests of the protesters were reported.

Because I often ride the bus, I felt dismayed when I heard that Teamsters Local 104, which represents Sun Tran drivers and mechanics, failed to reach an agreement with the city and voted to strike. At first I thought the strike might last a week or ten days – I was here in 2001 when the drivers were out for two weeks, and that was the longest transit strike this city had ever seen – but the Teamsters walkout that began on August 6 is now a month old, with no end in sight.

The hot weather and sharply curtailed bus service have created hardships for many of my fellow bus riders, and I sympathize with them greatly. I also support the union, and I want the Teamsters to get a fair deal from the city. But as I read about the strike in the Arizona Daily Star and the Tucson Weekly, I am struck by the fact that neither city leaders nor company officials want to acknowledge that they have both power and responsibility to settle the strike. Instead they continue to imply that all power is in the hands of Professional Transit Management (PTM, a company hired by the city to manage and operate Sun Tran), which is owned by French-based multinational Transdev. Sun Tran general manager Kate Riley’s opinion piece in the August 26 Daily Star titled “Well-paid Teamsters seek too much from city, Sun Tran,” was little more than an attempt to villainize the Teamsters. On August 30 the Teamsters took out a full-page ad in the Star calling for the Mayor and Council to act like leaders and to settle the strike. The ad made light of City officials’ insistence that they are prohibited by law from getting involved in negotiations with the Teamsters and called for them to “take whatever steps are necessary to ensure that PTM is instructed to bargain in good faith and reach a fair and equitable settlement of the SunTran strike.”

The morning of September 3 the Daily Star featured a front-page article called “Union blasts city/ Sun Tran over effort to bring intemps,” which reported that the City of Tucson had decided to hire out-of-state workers to drive Sun Tran buses while union members are on strike. And as if that wasn’t bad enough, according to a full-page ad taken out by the Teamsters, also in the September 3 paper and their second full-page ad in the past week, the replacement workers are “guaranteed to work 12 hours a day for ‘Strike Pay’ of $21.00/hour straight-time and $31.50/hour overtime, $22 per diem for meals, airfare, and lodging all paid by Sun Tran.” Remember that this is a strike called, at least in part, because Sun Tran refuses to offer the drivers more than $19.22/hour, while entry-level drivers are paid only $13.30/hour.

The Weekly, which has taken a more sympathetic attitude toward the Teamsters, posted a piece online in The Range on September 2 in which Andy Marshall, head of the Teamsters, is reported to have said that Sun Tran confirmed hiring a separate company to take care of placing ads online to hire temporary employees. The Weekly also reported that Sun Tran repeatedly denied these allegations, while city officials continued to insist that they cannot get involved in negotiations between the union and PTM. The Weekly article also noted that “This is an unfair labor practice strike, which means Sun Tran is prohibited from firing and replacing any of the 530 bus drivers, mechanics and others picketing.” Yet the Daily Star reported that replacement workers have been sought, which sounds like an attempt at strike-breaking and union-busting to me.

Since August 6, the Bus Riders Union (BRU) has held three events related to the strike, the most recent of which took place on Thursday, September 3, and was billed as the beginning of a “Don’t Pay to Get on the Bus Campaign.” The BRU, of which I am a member, calls for an end to the strike because it hurts bus riders, but the group also supports the Teamsters, opposes union-busting and strike-breaking, and demands that the mayor and council get PTM back to the table to bargain in good faith. The leaflet for the September 3 event encouraged riders and supporters to: “Join us in sending a message to the Mayor and City Council! When you ride, don’t put money in the fare box. Take money away from them, maybe this is the only thing the Mayor and the City Council understand? They need to provide LEADERSHIP during this CRISIS, not hide behind the lame excuse that they can’t legally do anything. The strike will ONLY be settled with their money and with their strong creative ideas.” And in fact there was a well-attended rally at Ronstadt Transit Center, followed by a direct action during which many BRU members boarded a Sun Tran bus without paying.  According to Channel 4 News, “A Sun Tran spokesperson says everyone is encouraged to pay their fare, but drivers have been instructed to let riders board if they refuse to pay during the strike.” BRU member Barbie Urias is shown saying, “Money solves this problem. They got the money. And we’re not going to pay money for these buses until they get those negotiators to agree on something. We need our bus service back.”

Today the Star featured the headline “Nearly half of striking drivers at top salary,” and this article reads like an attempt to rile up public opinion against the Teamsters. It points out that half of Tucsonans, living in a city whose median wage is $32,500, earn less than the $40,000 in pay and $15,000 in benefits earned by top tier drivers. By making an effort to shame the Teamsters into going back to work, the Star shows itself to be unable to process the fact that higher wages will lead to a more prosperous city, though columnists in the same paper have stated that allowing developers to gentrify Ronstadt will somehow lead to a more prosperous Tucson. On July 26, Road Runner columnist Patrick McNamara said that no one should stand in the way of redevelopment of the Ronstadt Center, and he quoted council members and real estate agents who agreed with him. He said, “Keep in mind poverty persists in the region, with Tucson consistently ranking as one of the poorest parts of the country.” But this logic isn’t applied equally by the Star to the economic needs of working people.