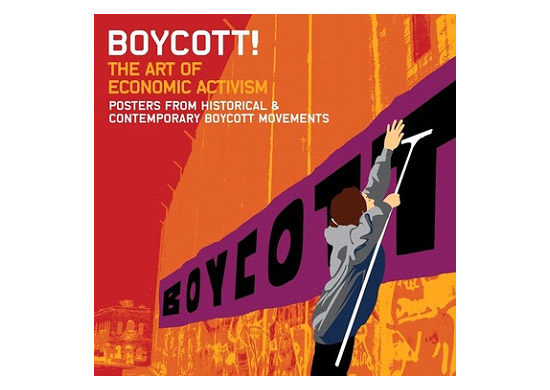 A unique collection of historical art posters titled Boycott! The Art of Economic Activism, comes to Tucson October 10 through 27. Including posters from the Montgomery Bus Boycott, United Farm Workers grape and lettuce boycotts, and divestment from apartheid-era South Africa, the art exhibit will be held at Armory Park Center, 220 S. 5th Avenue.

The Boycott! exhibit in Tucson is sponsored by Pima Meeting (Quakers), and the American Friends Service Committee (AFSC). The traveling exhibit features posters on historical and contemporary boycott movements. Films and speakers are also planned as part of the event.

Tucsonan Jane Kroesen says of the Boycott! exhibit, “Individually and collectively we have power. We choose where and how we spend our money. Boycotts have effectively raised awareness against abuse of power for centuries. We cast our influence through choosing not to buy a product and informing others of our choice and why. An individual has the means to inform the public, government and corporations that we do not agree with their policies through the simple act of boycotting. The artist plays a role in creating eye catching posters that spread the word. Pima Monthly Meeting’s goal is to educate our community to the power of non-violent protest, and boycotting is one way to shake the power structure.”

October 17:
Melissa Diane Smith:  on why and how to boycott GMOs in food.  Copies of her book Going Against GMOs will be available for sale following her talk.

October 24:
Dalit Baum:  Co-Founder of Who Profits from the Occupation speaking on corporations and the occupation of Palestine

According to AFSC, the art poster exhibition highlights diverse historical boycott movements from the 1950s to the present.  “Activists and solidarity groups have often responded to injustices by implementing boycott and divestment campaigns targeting companies and governments that support and sustain these injustices- and posters have been a primary tool for educating about the issues and inspiring people to action. This exhibition uses powerful posters to demonstrate the effectiveness of boycotts as a nonviolent tactic to end injustice and oppression.” The traveling exhibit is a cooperative effort between AFSC and the Center for the Study of Political Graphics. The posters will travel to Omaha, Nebraska, and Tacoma, Washington following the Tucson exhibition.

Boycott! The Art of Economic Activism will be on display October 10 to 24 and available for viewing when Armory Park Center is open, 9 am to 4 pm (closed on Sunday). In addition, the exhibit will be open on October 10, 17 and 24 from 5 pm to 8 pm. Grand opening is October 10 during Tucson’s downtown Second Saturday events and Tucson Meet Yourself.