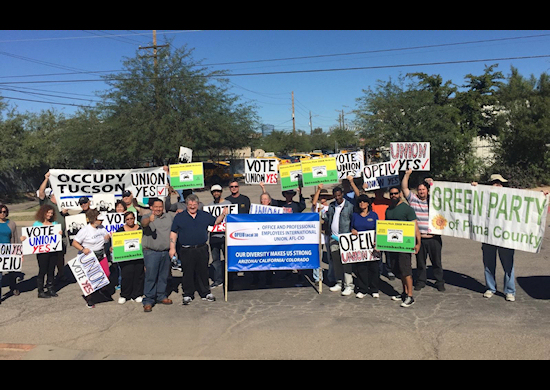 More than 200 Tucson taxi drivers hired by AAA Transportation/Yellow Cab are employees, not independent contractors, and therefore eligible for union representation according to an October ruling by National Labor Relations Board Regional (NLRB) director Cornele A. Overstreet. This historic decision is based on a determination that the drivers’ opportunities for loss or gain are controlled by the cab company which manages the business through its dispatch system.

On Sunday, November 1st, local labor leaders, and supporters including the Alliance for Global Justice, the Arizona Green Party, supporters of the Bernie Sanders campaign, and Occupy Tucson staged a demonstration in support of the taxi drivers’ organization effort. [include photo of demonstration]

The case was brought two years ago by the Tucson Hacks Association (THA), which petitioned the NLRB to challenge the drivers’ independent contractor status. The initial ruling was against the drivers, who filed a Request for Review that was granted. Then, the drivers requested help from the Office and Professional Employees International Union (OPEIU), affiliated with the AFL-CIO, which represents more than 4,000 taxi drivers in Las Vegas and San Diego.

The ruling also ordered an election to determine whether or not the drivers want to be formally affiliated with the OPEIU, which is conducting an organization drive among them. That election is expected to take place before year’s end. If the union is successful, the initiative could be expanded to other Tucson taxi drivers and nationwide.

Many changes are occurring throughout the United States that could potentially affect such organizational efforts, among them the rise of Uber as a low-cost taxi service that employs mainly part-time drivers who drive and maintain their own cars and do not enjoy the benefits to which full-time drivers are entitled and which the union seeks to guarantee. These new dynamics pose a serious threat to unionization efforts. Organizing Uber drivers as well would be a major challenge, but, like the Yellow Cab drivers and their dependence on Yellow Cab dispatchers, Uber drivers’ business depends upon an Uber-controlled app.