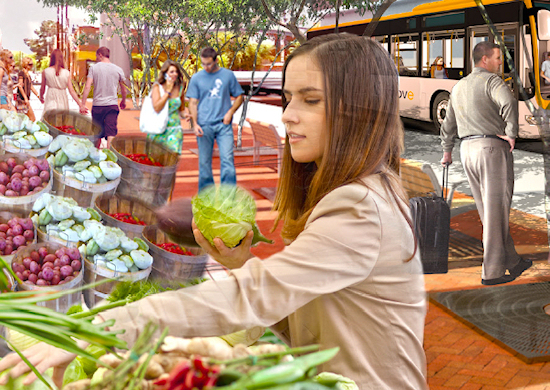 In a demographic survey of downtown Tucson’s future population — as it is presented in the winning proposal for the building complex to replace the Ronstadt Transit Center — the Occupied Tucson Citizen has ascertained that this population will be overwhelmingly white and middle- or upper-class.

Of the 101 total of clip art people shown in the eight architectural illustrations that present street level views of the future complex, 92 were definable in regards to race (nine with their backs turned were fully clothed, so it wasn’t possible to ascertain their skin color). Of these 92, 88 were white, three were black and one was brown-skinned. All but two of the 101 people were, however, based on their wearing either formal or a crisply informal, L.L. Bean-style attire, possible to define as being middle- or upper- class.

How a building complex whose transit center’s busiest bus lines come in from predominantly Latino neighborhoods on the south side of Tucson will have hardly a single Latino in it and, further, features none of the hipsters, hippies or other alternative elements that make up much of the population that surrounds downtown is a mystery. It is also a mystery how the downtown hub of a transit service primarily utilized by low income residents of the city will have hardly a low income person in it.

It might seem that this projected demographic — representing a kind of demographic pipe dream of city planners in which predominantly white, middle- and upper-class people populate our downtown and spend ample amounts of money in it — is a fantasy that can’t be realized in practice. But check out the demographic of the people in the restaurants and the many bars that now dominate that part of downtown. They may not be as overwhelmingly white (not quite, anyway) as has been projected here, but class-wise they are a mirror image of the cut-out people used in these architectural slides.

We are forced to conclude then that this project is just a first (albeit large) step towards a class- and even ethnic-cleansing of downtown. The next stage, we suspect, will come when the owners of the proposed boutique hotel that is slated to occupy the southwest corner of the current transit mall will start complaining about the distress to their guests caused by having so many low-income people around, “forcing” the city to move what will remain of the transit center out of downtown.

The demographic survey was conducted from the following pages of the Peach Properties proposal “Ronstadt: From the heart of Tucson to anywhere in the world”:

1st slide, page 1: 14 people, 13 clearly white, 1 can’t be indentified ethnic-wise; all are however middle-or upper-class based on their formal or a crisply informal, L.L. Bean-style attire and hair cut/styling;

page 40: 18 people, 2 black, one possible Latina, 1 disabled (who is also the identifiable class-wise), 3 not possible to define ethnicity/race wise;

Some number of pages utilized photographs (e.g., pp. 36, 37, 42) of existing structures to illustrate aspects of the proposed architecture as they have been utilized in other cities, the people in these photos were not included in the count as they are neither from Tucson nor do they necessarily represent the hypothetical and idealized demographic of our city planners.