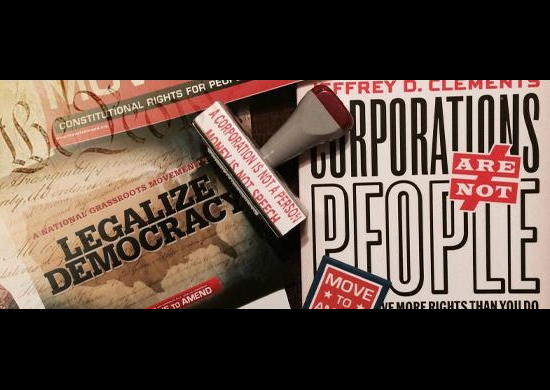 You’ve probably heard about numerous legislative bills and several proposed amendments… each one claiming that it will get big money out of our elections. Unfortunately, that is not the case.

First, regarding legislation…even if our corporate-owned congress were to pass legislation that in any way limits corporate or individual funding of campaigns, it will immediately be shot down by the Supreme Court for violating “corporate and individual freedom of speech”.

This is because, with its “Citizens United” decision, the Supreme Court has again declared that corporations are “persons” and are therefore entitled to all the rights of a person, including freedom of speech…. and they conveniently declared that the spending of money is “speech”. So that is pretty much the end of the road for congressional legislation as a route to stop the buyoff of our elected officials.

You can see why a Constitutional amendment must be passed, to undo the absurd legal concepts of corporate personhood and money as speech, before any legislation can succeed in prohibiting or even limiting campaign funding.

As for the proposed amendments to the Constitution… you may be surprised to learn that only ONE of all those currently proposed will, in reality, solve the problem…. that one is known as the “We The People Amendment” (House Joint Resolution # 48). It’s the one proposed by Move To Amend.

The first generation of US Citizens after our Revolution remembered how the King had used corporations to ruthlessly exploit and extract the wealth of the colonies. In fact, the Boston Tea Party was a protest of the unfair practices of the East India Trading Company (a corporation).

So that first generation of new citizens made sure that corporations had no rights… only privileges, and that corporations were very closely supervised, extremely limited in what they could do, and could have their charters revoked by the people at any time.

But, as that first generation of citizens died off, people forgot that history, and wealthy men running corporations began finding ways to, bit-by-bit, increase the power, independence and influence of corporations.

Then in the 1860s the Civil War, with all the government spending that war inevitably creates, provided the wealthy ruling class a huge opportunity. Corporations became the major means for the wealthy to enormously increase their wealth and influence in government.

Bribery of legislators and other officials, and the use of attorneys (to write new laws and to challenge any laws restricting corporate actions) became their main strategies. Over time, the lifespans of corporate charters were increased, while corporate accountability and citizen authority over corporations were decreased.

Then in 1886 the Supreme Court heard a case called “Santa Clara County v. Southern Pacific Railroad”. Although the court specifically stated in that case that it was NOT ruling on the question of “corporate personhood”, the court clerk made misleading notes in the margin of the record, indicating that the court had ruled that a corporation was a “person”. Since then there have been more cases citing this ruling as a “precedent” and further expanding “corporate personhood” in our laws.

Therefore, the recent “Citizens United” case was not the first legal use of “corporate personhood”. The significance of “Citizens United” is that it marked the completion of the corporate strategy to allow them to purchase our government. This was accomplished through the Supreme Court’s unambiguous declaration of “corporate personhood,” giving corporations Constitutional Rights”… one of which is freedom of speech. So the Court’s declaration that the spending of money qualifies as “speech” gives corporations the Constitutional Right to spend unlimited money (speech) in whatever way they wish, and they are now busily purchasing our elections, and thereby, our government.

So, overturning “Citizens United” alone will not solve the problem. As long as “corporate personhood” remains in the law, corporate attorneys will cite its existence and the precedence of former court acknowledgement of “corporate rights”. They will use these to challenge every law seeking to limit or regulate campaign funding.

Corporate attorneys will claim that such laws violate a corporation’s first amendment “right” to “free speech”. And they will win that argument. The courts will point out that you can’t continue to define a corporation as a “person” and take away any of the Constitutionally recognized “rights” every “person” has. So “corporate personhood” must be abolished before any law seeking to limit campaign funding/spending.

In a similar manner, failure to clearly abolish the definition of money as “speech” will still allow wealthy individuals to spend huge sums for campaign funding under their “free speech” rights.

Some people (including Bernie Sanders) claim that completely abolishing “corporate personhood” may have “unintended consequences”. But these fears are completely misplaced. Anything a corporation currently enjoys as a “right” can instead be granted as a “ privilege.” Unlike a right, a privilege is conditional. If the conditions are violated, the privilege can be revoked. This is the perfect answer since it makes the corporation accountable to the people.

Unfortunately, those politicians and groups who are focusing on just overturning “Citizens United” or who are not abolishing both “corporate personhood” and money as “speech” are playing right into the hands of the wealthy corporations and individuals.

It really doesn’t matter whether these groups who are focused only on “Citizens United” originated due to good intentions or due to covert corporate efforts to make people believe they are accomplishing something when they are not.

What does matter is that either way, they are dividing efforts to pass the only proposed Constitutional Amendment that will eliminate the legal obstacles to passage of legislation limiting or prohibiting private money in our elections.

This is why we must insist on complete abolishment of both “corporate personhood” and money being defined as “speech”. Only the Move To Amend amendment does that. It is the “We The People Amendment” House Joint Resolution #48.

(At MoveToAmend.org you can compare all the proposed amendments for yourself. Just click on “Amendments” and when the menu drops down, click “Amendment Comparison”.)