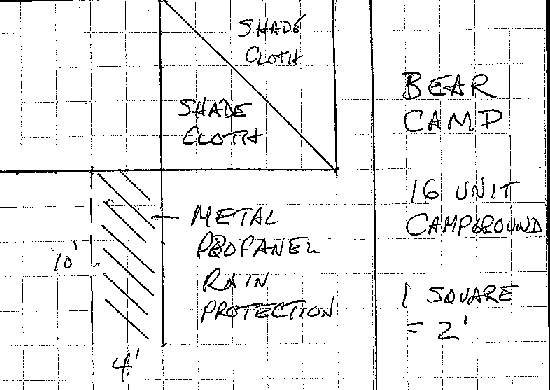 The City of Tucson, under the leadership of Council Member Richard Fimbres, has been hosting monthly meetings to address some of the ongoing struggles with providing safe, decent housing for all of us. At the same time, Council Member Karin Uhlich and her staff have been investigating some housing options that are being used in other localities. At the Fimbres meeting on January 27th, council aide Brianda Torres presented the pilot programs in Eugene, Oregon, including rest stop campgrounds and micro housing developments. The following proposal by the Tucson Urban Camping Association was distributed at that meeting. The Bear Camp proposal is based on the program in Eugene, as well as other experiments around the country.

Summary: Bear Camp is a proposed 16 unit urban campground, to be located inside city limits, with an onsite resident manager and assigned living spaces. Amenities include bathing, laundry and cooking facilities and onsite lockers for storage of personal belongings.

Purpose: Tucson has a robust system of housing shelters, including the Hospitality House of Salvation Army and the Primavera Men’s Shelter. However, existing shelters do not serve everyone in need of housing. Bear Camp may be an option for some, including short time Tucson visitors, people with pets, and others looking for a more outdoor lifestyle.

Site: Bear Camp can be sited on a typical city lot of 50 by 80 feet. The ideal site would be located in a commercial area, and could be permitted under the city’s RV zoning. The city recently approved a 23 unit RV campground at 450 N. Grande, located between a school and an apartment complex. The ideal site would have utilities to the lot line, including water, sewer, overhead electric, phone and natural gas. Alternatively, the site could substitute a large propane tank if natural gas not available. The site would also house an onsite resident manager residence, most likely a trailer or RV. There would be a shower, toilet, laundry and cooking facilities centrally located, as well as a ramada with picnic tables. In addition, there would be an electric panel to charge electronics, and a WI-FI connection for internet access.

Individual units: We propose four quads with four campsites in each quad, with privacy fencing, overhead rain protection and shade cloth. Each site would have a 3 by 6 foot storage locker, that could also serve as a bed frame, and a small table. Residents could provide their own tent or tents could be available from the resident manager.

Budget: We request an initial grant of $20,000 for a one year project. About half of this would pay for capital improvements, including the resident trailer, the community amenities, fencing and utilities. The remainder would cover a projected site rental of approximately $600 per month. However, if the city provides a site, that amount would decrease. Bear Camp could charge a $2 per night fee, or $10 per week. We project that would raise $600 per month in fees, that would cover a $100 per week stipend for the manager, and $200 per month for utilities.

Potential city staff support: Brianda Torres has done extensive research on urban campgrounds in other locations, including Las Cruces, NM and Eugene, OR. Glenn Moyer has a solid background in planning services. Jodi Barnes has worked closely with the shelter community on grant compliance.

Potential allies: The downtown business community has struggled with the impact of insufficient housing for years. They might be strongly supportive of Bear Camp. Some religious organizations are looking to help, but are facing increasing hurdles, like the recently enacted city ordinance regulating feeding operations. They would find it easy to provide food and other services to the onsite residents. Social service organizations might also decide that Bear Camp allows a way to provide needed services to folks in need, as opposed to the current park, river camps and scattered sites that Bear Camp would help to replace.

Next steps: We welcome discussion of this proposal with interested parties and request that Council Member Fimbres consider recommending Bear Camp to the city council and mayor for further review.