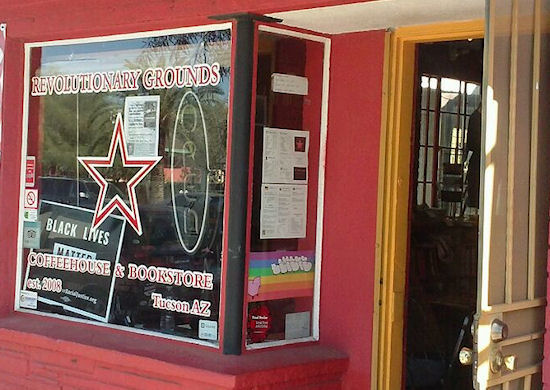 Revolutionary Grounds, respite to all connected to the above and more, is reeling from debts incurred with not only the disruption caused by Tucson’s streetcar construction, but also by the additional year of delay in its completion. Now that the new transit is finally up and running, owner Joy Soler says, “The streetcar nearly killed us.”

Business has been down, and she cites the installation of parking meters with the promise of $120 fines as another possible reason foot traffic on 4th Avenue has dropped precipitously from pre-streetcar levels. Additionally, the rent jumped twice for all the merchants in the building since the streetcar started running. And the people on the SunLink line? “They ride right past us.” But, she says “We’ve made a commitment to the community.”

Along with her husband and partner in the business, civil rights lawyer Paul Gattone, Soler is reaching out to the community for financial support with a series of fundraising events, the first an art and book auction this Sunday, March 6, 6pm, at the coffeeshop / bookstore / meeting place at 606 N. 4th. (Just remember the number “6”.) Donations for auction are being accepted right up until the event.

Before Joy and Paul put their long-time dream into reality in 2008, the building was home for 14 years to Rainbow Planet. They helped the former owners through bankruptcy and segued into the new business which features Soler’s specialty vegan and vegetarian baked goods, along with teas, coffees, salads, soups, bagels, sandwiches, and a seriously relaxed atmosphere. The walls are decorated with intriguing posters and lined with shelves filled with books to entice all kinds of revolutionaries. As Gattone puts it, “We are open to the leftist perspective.”

Soler says if they only had to meet day-to-day expenses, the business would be doing okay, but in the recent downturn they incurred expenses for equipment, like the commercial refrigerator currently on life support, and assorted upkeep that have dropped them “in a financial hole.”

Recent events hosted at Revolutionary Grounds were a reading and discussion titled Political Repression, the National Security State, and Collective Legal Resistance with author Kris Hermes about his book, Crashing the Party: Legacies and Lessons from the RNC 2000. A Marxism discussion group meets on a regular basis. In addition to meetings and gatherings open to the public, a number of groups, including the Occupied Tucson Citizen working group’s weekly meeting, use the space for private meetings.

Revolutionary Grounds is the place to start or join a revolution. Support the free-flow of ideas this space offers Tucson and attend the fundraisers. Lend support just by dropping by for coffee, treats, and the leftist atmosphere.

“People have only as much liberty as they have the intelligence to want and the courage to take.”
― Emma Goldman