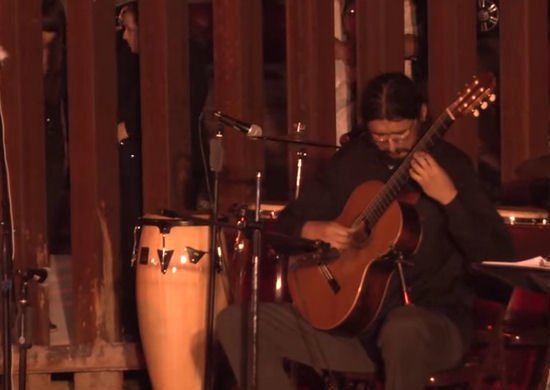 What if the barrier between the United States and Mexico were a wall of song?

April 16, for the fourth year, Concert without Borders proves a border can easily be crossed by both music and good will. The event features musicians from Mexico and the United States performing on stages separated only by the slatted metal border fence west of the international crossing between Douglas, Arizona, and Agua Prieta, Sonora.

The idea was first conceived by Bisbee musician and Cochise College music instructor Lori Keyne, who is choir director of the Binational Chorus she launched in 2006. Along with her husband, Seth Polley, and other local activists and performers, thoughts of “transcending the border” grew into the series of concerts. “There’s been a lot of people involved,” Keyne says. “Too many to list.”

A project of the Binational Arts Institute, sponsors are the Mexican Consulate of Douglas, Casa de Cultura in Agua Prieta, Cochise College, Galiano’s Cafe, Cafe Justo, KBRP, and the Sister Cities of Douglas and Agua Prieta.

The concert runs from 6 to 9 pm, rotates between U.S. and Mexico musicians to start, then introduces the alternating headliners. In the final hour, instrumentalists and voices from both sides will combine as one.

A crowd of about 300 attended last year. More of an effort to get the word out about this one-of-a-kind musical experience promises to increase attendance in both countries for the 2016 free concert.

“I’m excited this year because I’ve been working with musicians on both sides who are into doing this, so it’s really feeling like an event coming from people’s hearts,” says Keyne.

An Indiegogo site is fundraising, with most of the money earmarked to pay the musicians.