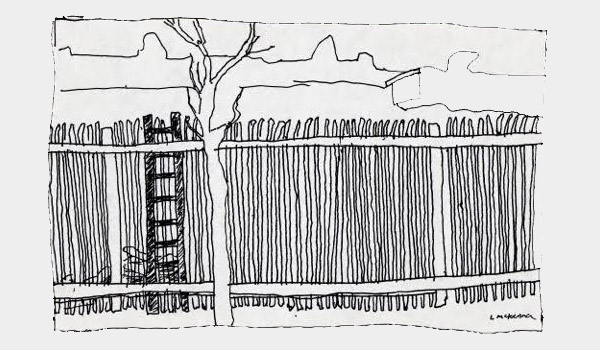 The Concert without Borders Saturday, April 16, is troubled by chilly winds that flap the huge banners hung behind two stages separated by the U.S. border fence and eventually help drop the temperature down to the 40’s. The sound system is desperately in need of sound check in both English and Spanish. Tremendous enthusiasm for borders that do not include a wall is openly expressed on stage. Entertainment includes belly dancing, classical guitar, classic rock, a baritone in a tuxedo singing classical scores karaoke-style, and a binational chorus. A lit-up flying machine (drone) flits over the edge of first one country, then the other, a reminder that border walls are ancient technology long ago rendered obsolete which only provide a false sense of security. About a thousand people total over the course of the evening mix and mingle in the peaceful atmosphere that tonight connects both sides of the Douglas, Arizona, Agua Prieta, Sonora, border.

On the Mexican side children take turns drawing at child-sized easels with pages clipped in place. People play chess. Vendors sell homemade arts and goods. Barbacoa sends smoke mixed with the smell of meat cooking across the line.

On the American side food trucks offer cold drinks and hot dogs and artists and craft makers also have tables lining the fence with objects for sale. Members of the community are here to support friends who are performing, to take in the atmosphere, to join this musical protest, or just to see the border for themselves.

Both stages face west. Chairs lined up in front of each fill and empty and fill again. Many people take photos on both sides and through the fence, and a huge cherry-picker in the U.S. lifts a few news photographers above the barrier for the overview. Behind the stages is the incredibly busy international crossing. Cars back up on both sides and crawl past each other through the passageways, enjoying, or not, the changing music.

My passport in my pocket, I walk without interference into Mexico in the waning daylight to experience first hand this side of the border. The fence here was recently painted blue to visually erase it against blue sky. It actually works. That protest by an Italian artist is partially painted over by an inexpressive mural.

Soon I am speaking with Rosa U., who is visiting with her children through the fence. She has seven, all American citizens, who have given her seven grandchildren. Rosie came to the U.S. when she was 13, a choice her parents made for her. Seven years ago she returned to Agua Prieta for a visit. She was awaiting an immigration hearing that was three weeks away. Her lawyer assured her it would not be a problem for her to cross and return to the U.S. But when she tried, she was not just turned away, she found herself locked out for ten years.

Her two youngest children crossed to live with her in Mexico. The five others have made their way through college and jobs in the U.S. and now are settled in Douglas, Tucson, Phoenix, and Flagstaff. Tonight one daughter’s art is for sale on the U.S. side of the fence and at this spot the family congregates.

The wall works like a sieve. From time to time one or another family member reaches hands through, shares purchases from the food trucks, or slides a face between the iron slats to give the mother a kiss.

The wall works like a barrier. In three more years Rosie can make another application, with an unknowable result. “I am afraid of what will happen if Trump becomes president.” She looks fearful as she says this. I mention that it takes a while for laws to change, but she corrects me. “I have seen it change in months.”

The wall works like a prison. The wall keeps law-abiding people like Rosie out. Rosie’s children and their children must always come to see her. She is never able to attend the births, graduations, weddings, and celebrations of her family.

For a few minutes in the twilight I witness an array of emotions freely wash back and forth across the border among these family members.

I wish Rosie and her family well.

I walk the short distance back to American soil, which is exactly the same as Mexican soil. My passport gives me quick access through the port. What is it we gain as Americans for treating anyone the way that Rosie and her family are treated at our border?

To the vast country north of Mexico the border is an abstraction, something pliable that politicians shape to their needs with words and steel. I am glad I came here today to see what it is really: an ugly rusting iron curtain, visually, it is Christo on meth, definitely not a great wall, constructed by the U.S. with serious consequences for everyone on both sides, a barrier that distracts from deeper issues of how we as a people relate to our neighbors, an environmental disaster, and an example of fences reinforcing the false concept that “we” in our country club are better than “they.” The border fence is a monument to failed diplomacy. If all the problems the fence causes were put in one basket, and all the ones it solves in another, which would be heavier?

I am grateful for the Concert without Borders that brought me here so I can leave this place with a better understanding of the reality of how complicating is the simple solution of a fence.