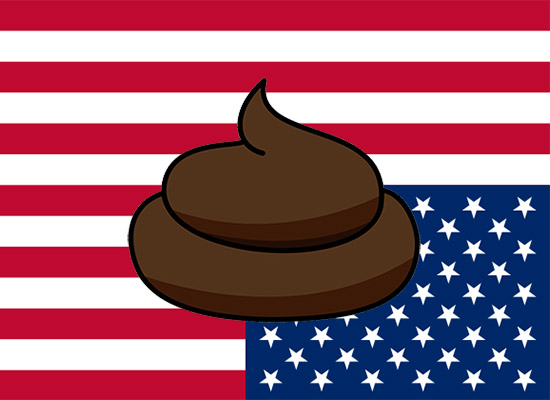 The rise of Donald Trump is convincing evidence of a moral and philosophical bankruptcy across the Right in the United States today. What is there to say about the litany of bullshit1 we’ve heard from this man since he announced his candidacy on June 16, 2015? That day he announced that Mexico was not a friend of the American people, and that “When Mexico sends its people, they’re not sending their best. […] They’re sending people that have lots of problems, and they’re bringing those problems with us. They’re bringing drugs. They’re bringing crime. They’re rapists. And some, I assume, are good people.” Trump then announced his plan to build a Great Wall to keep out the southern hordes destroying this country, and millions of people haven’t stopped applauding for him since. Well, a few of them temporarily balked at Trump during his recent “softening” on unauthorized immigrants. This man who, while trailing in the polls and looking both strategically and organizationally weak, nonetheless could be our president, tentatively and gingerly suggested to his supporters that maybe we wouldn’t forcefully deport “terrific” people who happen to be unauthorized immigrants, but instead put them through a process to give them a chance at citizenship. The audience wasn’t convinced—there was noticeably more enthusiasm for just throwing out all of the unauthorized immigrants2.

A week later, Trump was running away from this test marketed “softening” in a speech in Phoenix, Arizona. Trump’s reactionary base had spoken. There would be no “softening” as the crowd burst into cheers as Trump hinted at a beloved slogan, and as it burst into chants of “Build the Wall!” once Trump mentioned the Great Wall. And of course, “Mexico will pay for it.” Trump also promised that on day one, in the first hour, all criminal immigrants would be sent back to their home countries. Poof! The crowd went wild. What is there to say about the Right today that just two months from the election we still see over 40% of the electorate projected to support Trump, with perhaps another 5% who could swing to him depending on the circumstances3?

I understand not supporting Hillary Clinton. And I understand rejecting the establishment more generally. For the first time in my life there’s actually a chance to at least symbolically4 defeat the establishment in a presidential election. But the defeat would be in the name of Trump and Trump alone. It’s a choice of sorts: the status quo vs bullshit. How much of the electorate is ready to (in the best cases) reject establishment corruption and war mongering (in other cases rejecting liberalism, ethnic and religious diversity, feminism, etc.) in favor of bullshit? What is a rejection of corruption worth when it is indifferent to the truth? How can almost half of the country really find improv and posturing a legitimate response to corruption, or economic stagnation, or terrorism, or anything?

What if Trump were a serious person who could refrain from attacking veterans and the families of dead soldiers? How many more people would vote for him? There are significant numbers of liberals and leftists who could be manipulated by a charlatan like Trump. Trump could have stopped months ago from feeding so much red meat to the many reactionaries who adore him for mainstreaming white resentment, but he couldn’t help himself… he loves their applause. Trump showed interest in Sanders supporters, but he never followed through applying his shtick to, for example, claiming that he knew all the tricks of the rich and would be able to get them to pay higher wages and more taxes to support Social Security, Medicare, and universal healthcare. He wouldn’t have lost any support if he’d put energy in appealing to the class prejudices of the Left. Instead he’s putting out GOP boilerplate about lowering taxes on the rich. He has been ineffective in picking off voters from the vulnerable left-wing of Clinton’s base of support. What if he were a competent politician and organizational leader?

Over the last month, I’ve been happy to notice the real problem being acknowledged—at least partially. As Ryan Lizza of the New Yorker put it, “even if Trump loses, Trumpism won’t necessarily lose, too.” Lizza was reacting to an analysis from Gallup based on 87,000 interviews that found the qualities that most successfully predicted Trump support were racial isolation, poor health, and poor intergenerational mobility. The analysis revealed that “Trump support falls as exposure to trade and immigration increases”; in other words, it is the people least affected by unauthorized immigration that oppose it most fervently. Consider as well that this obsession with unauthorized immigration comes while net-migration from Mexico has been negative since 2008 and while removals5 reached record numbers in 2012.

More recently, comedian and political commentator John Oliver listed four flaws Donald Trump’s candidacy has exposed of the US system: the corrupt campaign finance system, the media’s tendency to sensationalize and emphasize conflict, the extent political parties will go to appease their voters, and finally the people themselves: our vulnerability to lies, fantasies, distractions, and our indifference to the truth. Oliver spends little time talking about the people, even though two of the other three flaws ultimately flow from that same source. The media tends towards sensationalism and conflict because that’s what commands our attention as human beings. And likewise politicians and the political parties as institutions derive their power by telling their constituents what they want to hear. Oliver said he needed to cover Trump before taking a couple weeks off, but he could do much more important work (and I believe stronger work) if he and his team would focus on the big picture of the cognitive and social health of the American people6.

Ultimately Oliver spent his time indulging in a liberal fantasy, advocating for Donald Trump to “drop out and tell America this entire candidacy was a stunt, a satire designed to expose the flaws in the system.” Indeed, this would be the best-case scenario for Trump supporters and possibly spare our society of what is an increasingly looming threat: a quadrupling-down on bullshit and reactionary fantasy. If Trump wins, subsequent evidence of this group’s deep break with reality will be that much easier for them to deny for a while. But that shouldn’t obscure another scenario: if Trump loses, this group is still quadrupling-down; they’ll just feel less comfortable doing so after a Clinton victory. Either way we, as a nation, have to be real about how vulnerable we are to bullshit. The idea that this can’t last is a misreading of the problem. It can be more painful to admit to a mistake when we have committed to it publicly than to deal with the cognitive dissonance of denying reality and finding rationalizations that feed back into a failed belief system7.

Bullshit is a glue and a not-so-secret weapon that may be able to bring together a coalition to defeat the American political establishment in our current electoral system. There must be authoritarians8 both in and out of the United States that are looking at Donald Trump’s possible path to the presidency and licking their lips at the prospect of taking their own shot at it 4 or 8 years from now. (Ironically, the Right’s descent into nihilist fantasy has exposed a vulnerability of the United States to one of their own boogeymen: a Manchurian candidate.)

The considerable support for Donald Trump, despite his cartoon-like narcissism, is a warning. It is time for us to wrap our minds around the necessity of countering our own and others’ ignorance and indifference.

Show the notes to this article

1. “Bullshit” here means a lack of “concern with truth—[an] indifference to how things really are”. See On Bullshit, by Harry Frankfurt

2. The reactionary wing of Trump’s base of support won’t allow him wiggle room on this issue. He can bullshit about anything else, and reactionaries seem quite entertained, but he will not be allowed to say whatever he likes about immigration without risking reactionary support. He must toe the line and stick closely to the derangement on illegal immigration popularized by right-wing radio. However, his inability to pivot away from unbridled bigotry in this case has cost him the support of some Hispanic surrogates.

3. This number could be higher if it turns out that there is a subset of (particularly college educated) individuals who are embarrassed to admit to supporting Trump. Likewise polling data can be biased in other ways, as it was leading up to the Brexit vote in the United Kingdom. One analysis suggests the differences between people who were easy or difficult to reach on the phone contributed to biased polling.

4. Trump may have offered Mike Pence (and therefore the Republican establishment) the bulk of presidential powers and responsibilities. That is what was reportedly offered to John Kasich to run with Trump as the Republican vice-presidential nominee.

5. Note that in the same link showing removals at a record high in 2012, returns are shown at a 40 year low. “Removals” is a category that includes people who were stopped and prevented from entering U.S. territory, as well as those expelled from the United States after making their way in, based on court order. “Returns” also involves people who are prevented from entering U.S. territory, but is not based on court order. These categories tend to be conflated in a lot of media coverage. Due to differences in categories and methodology between administrations, comparing administrations is always imperfect. Also note that, since 2012, the number of removals has been decreasing back down to George W. Bush levels.

6. I say “American people” as it is beyond the scope of this essay to explore the full extent of this issue, but I think the problem goes much deeper than American culture. In Being No One, German philosopher Thomas Metzinger predicts “that certain classes of delusional states will […] be emotionally attractive to beings like us.” In Denial, Danny Brown and Ajit Varka argue that our more advanced cognitive abilities have been made possible by our own self-deception. By “cognitive health of the American people” I mean our culture’s ability to learn new things, exercise sound judgment, and remember its past. Not only do changes in science, technology, capital, and government seriously challenge our ability to form a coherent understanding of the world, but rational thought has additionally been under an intense and widespread assault since World War I when the institutions of public relations and advertising were institutionally legitimized throughout the United States. Before that, intellectual culture was already changing throughout Western civilization away from Enlightenment ideals and towards post-modernist critiques of the impossibility of absolute truth and the dangers of absolute morality in favor of defenses of status quo distributions of power. This change among intellectuals has further contributed to widespread confusion and has subsequently introduced further difficulties in encouraging rationality.

7. In When Prophecy Fails, Leon Festinger, Henry Riecken, and Stanley Schachter convincingly argue that disconfirmations of apocalyptic predictions are typically followed by a recommitment to the underlying belief system.

8. Why only “authoritarians”? Why can’t I assume some positive movement might take advantage of this vulnerability of the establishment? Because this vulnerability to bullshit on the part of the people can’t be tamed to serve as a strategic pillar of any worthwhile movement. Widespread indifference to the truth benefits authoritarians of all stripes.