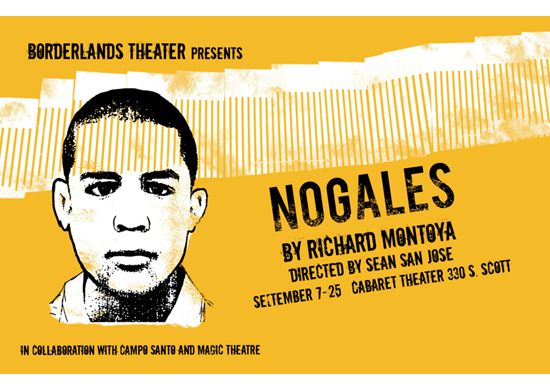 There is a rare and wonderful feeling when you know you have witnessed something remarkable live onstage. That is the punch Borderlands Theater delivers with Nogales: Story Tellers in Cartel Country.

It’s not only that you have just watched Richard Montoya, accomplished playwright and actor, in a brilliant interpretation of Sheriff Joe Arpaio (spoiler alert: “pole dance” and “My Way”) you have been treated to the latest update of Teatro Campesino. That is a form of theater born out of the the mid-1960’s farm labor unrest. An itinerate group of players traveled the back roads of migrant labor camps, often using truck flatbeds for stages, acting out the oppression of the people. No two performances were the same because the play shifted along with current events. The activist theatre brought entertainment, news, and political awareness to weary field workers. In spirit, Nogales continues the tradition.

On October 10, 2012, Jose Antonio Elena Rodriguez, 15, was walking home late, almost midnight, from a pickup basketball game with friends. About 30 feet from the border fence he was gunned down. A border patrol agent who fired from Arizona through the international border fence into Mexico, allegedly at rock throwers, faces murder charges in a trial scheduled to begin in November in Tucson. The agent, Lonnie Ray Swartz, is the first agent in Border Patrol history to be charged with a cross-border shooting. Jose Antonio’s homicide–15 bullets in his body is stated in the play–is the organizing principle of Nogales.

Jose Antonio, a silent, healthy ghost played confidently by recent Cholla High graduate Stephen Narcho wanders in and out of the stage action taking in life after his own death. The stage itself is a replica of Joe Arpaio’s office. Montoya and a film crew connected with ASU were granted 15 minutes, but spent over two hours filming Sheriff Joe, even coming away with his signed pink underwear. Much of Arpaio’s dialogue in the play comes from that interview. Footage of Arpaio and other images from the borderlands by video designer and photographer Joan Osato inform the play without intruding. Montoya is generous to the truth, capturing Arpaio’s charm and appeal as well as conveying a warning: Arpaio is a mini-Trump.

Highly political and satirical, Nogales draws on ancient mummery as a religious base and reaches deep into Latino roots for imagery.

Several interludes about border life not directly connected to the shooting are twined into the play; these are acted by Marc David Pinate, Perla Vanessa Barraza, Juan Amador, Angelica R. Maddock, Rosanne Cousden and ten-year-old Sara Haro. But nothing ends up out of place. Connect the seemingly random news dots, mined for viewers by a journalist who also plays the Catholic priest (Sean San Jose), and the play’s disturbing borderland snapshot comes into view like a pixelated photo resolving. How does it relate to the bigger picture? Montoya suggests what has happened in the Nogales sector of the border has serious implications for the whole country.

Intelligent, insightful, heartfelt, funny and complex, Nogales rambles like an 84-year-old sheriff inadvertently telling it like it is.

Tucson is fortunate to be home to Borderlands Theater, the launch pad for this touring show. The word is getting out. Get a ticket while you can. The play runs through September.

Read about the play and cast and purchase Borderlands Theater tickets here: http://www.borderlandstheater.org/borderlands-theater-wins-prestigious-50000-00-grant-to-launch-barrio-stories-project/