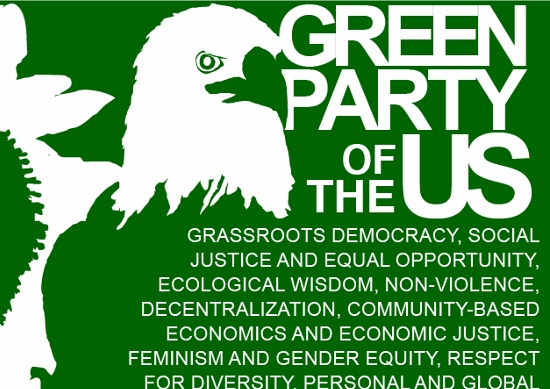 In the middle of June 2016 the US House Committee on Natural Resources approved HR 3650, an effort to expand privatization of public lands. The bill would transfer control of “up to 2 million acres of eligible portions of the National Forest System” from the federal to state governments. Since state governments cannot afford firefighting budgets for such huge pieces of land, the law is a slick maneuver to make certain that lands will end up in the hands of private corporations. Endgame: increased logging, increased mining, increased destruction of ecosystems, increased profits for a few of the super-rich, decreased recreational sites, decreased jobs for the 6.1 million Americans working in recreation.

There is a word that the Green Party might consider putting at the front and center of its 2016 presidential campaign. That word would show the commonality of hundreds, if not thousands, of local struggles in the US and set the pace for Green Parties across the globe. It’s a word that Donald Trump and Hillary Clinton won’t touch. The word is: “De-Privatization.”

A few weeks ago I was working on income tax reporting for the non-profit organization, Gateway Green Education Foundation. When the online process seemed to be totally different from last year, I called the IRS with an expectation that I would be connected to the private company which had been handling the outsourced 990-N forms.

To my amazement and delight I was connected to an IRS employee who explained that the outsourcing of the form had been reversed and was being handled directly by the IRS again. The government employee with whom I spoke went through the process in a much more efficient and courteous manner than employees of the private corporation had during the previous several years. It could be because corporations which receive contracts for outsourced projects force employees to work longer hours for lower pay, provide less job protection, subject them to more harassment from management, and offer fewer medical and pension benefits than government employees receive.

While these oppressive working conditions may give the illusion of greater “efficiency,” they cause such extreme job dissatisfaction and such high turnover that they result in the average worker being on the job for a shorter period of time.

I congratulated the IRS worker for being able to work for the federal government and said I was very pleased with the help I received.

This is de-privatization. A government (whether US, state or local) recognizes that privatization of its service creates more problems than it solves and establishes government control over the task.

A couple of weeks later, on June 1, St. Louis KMOV TV Channel 4 reported that the Rockwood School District was taking over school bus service from the private company First Student in order to save $1 million. Private buses often did not start properly or failed inspections.

At the same time, the St. Louis Post-Dispatch reported that, instead of continuing to rely on private ambulances from the company LifeStar, the city of Alton will operate ambulances itself. The change was made both as a measure of financial responsibility and to reach “an adequate level of emergency response.”

There is a fierce battle going on which reflects a concerted effort to destroy unions and return working conditions to what they were in the 19th century. City after city in the US is confronting the failure of privatization. We know that contamination of water in Flint, MI reached crisis proportions following privatization. In many cities the main push has been to privatize schools. In others, it has been to privatize municipal services such as trash collection.

Where I live, in University City MO, it has grown from privatizing mulch to attacking the firefighters union by privatizing ambulance service, attempting to reduce summer programs for children and trying to turn a children’s playground into a parking lot. When the city acted like it was about to sell off some of our most beautiful historic buildings, a citizen initiative got Proposition H on the ballot. It requires voter approval before the city can privatize any of these buildings. It passed with 69% of the vote. If Prop H had gone down to defeat I believe that the next step would have been overturning the 1990 City Charter Amendment protecting U City parks. This would have paved the way to selling (or leasing) parks to companies which could charge admission.

At the national level, we see the grotesque privatization of services at national parks, permitting of mining and deforestation on public lands, and even the use of eminent domain to allow huge corporations to abuse small farmers and homeowners with fracking and fossil fuel pipelines. The centers of the controversy are attacks on postal services and efforts to privatize social security and medicare as a way to undermine them. Since the best defense is a good offense, citizens could demand expansion of postal services, a doubling of social security and a single payer health insurance program.

But, wait, there might be an even better way to protect Medicare. What do the countries of Denmark and Cuba, as well as the US Veterans Administration, have in common? Socialized medicine. We could abolish private health insurance companies and rehire their employees in a US socialized medicine system and, to make sure that there are enough jobs to go around, offer those employees a 35 hour work week with no loss in pay.

As Democrats join forces with Republicans to babble that socialized medicine must be “off the table” because it would be too expensive, data continue show that Danish socialized medicine costs less than half per capita of US medical costs and results in a longer life expectancy. The only “advantage” of corporate medical care is the billions in profits it earns for the parasitic industry. Should this industry be called health insurance or sickness assurance? Whatever you call it, it reflects the essence of private control by the 1%, whether it is at the local, state, or federal level.

Countries across Europe are seeing massive opposition to cutbacks in social services, selling of public assets, reduction of wages and efforts to make it easier to lay off workers. The prime example is Greece, where international banking interests conspire to grind the country further into poverty.

Throughout Latin America, right wing (and even some left wing) governments are allowing increasing corporate encroachments on mines, forests and indigenous lands. Struggles to stop the privatization of water propelled Evo Morales into the presidency in Bolivia. There can be no doubt that the right wing in Venezuela will do everything in its power to re-privatize the petroleum industry.

A century ago, the Bolsheviks proposed a slogan that pulled together simple ideas: “Bread! Land! Peace!” A 21st century proposal could also bring together thoughts shared by millions: “Climate-Stabilize! De-Militarize! De-Privatize!”

Don Fitz is a National Committee member of the Green Party USA. He can be reached at fitzdon@aol.com. The article originally appeared in the journal Green Social Thought and is reprinted with permission.